I saw every Mel Brook's movie that ever came out. After Blazing Saddles, Mel Brooks was the hottest movie maker in Hollywood and his movies are usually cited by comedians around the world as an inspiration. I think Mel is hit or miss. Hit or miss not from movie to movie but from scene to scene. In some movies there is a huge amount of consistency but in others there is not That doesn't mean they are not funny but it does mean that they do not always hold together that well and they may have some flat spots. Young Frankenstein, Blazing Saddles are both solid every single bit. High Anxiety is about 75 percent. Space balls is maybe 25 percent. To me, Silent Movie falls right in the middle.

This is a funny concept, film makers with a script for a Silent Movie to be made in contemporary Hollywood. Then you do the movie in a style similar to the old silent classic comedies. You populate it with popular stars of today and then let them loose on the screen. The big problem is that none of the movie is about the Silent Movie and how it comes out. It is all about the process of trying to get big stars in the picture, but we never see any of the script as the director finally put it together. That means that at best this film is going to be a series of vignettes, with thin plot to hold them together. So here is how I felt about most of those scenes. 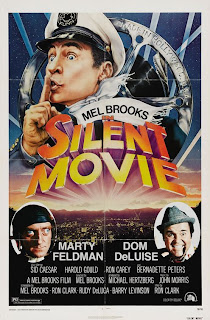 The opening, with the three film makers picking up a pregnant woman and having the car tip up in the air falls flat. It looks like a one joke bit stretched over a couple of minutes, finished off with a payoff that has nothing to do with what came before. I have not seen a lot of silent comedies, but the ones I have seen hold together better than this. Here they are, fifty years after the introduction of sound and the movie has less narrative and pacing than a movie from 1920. The guys mug and there is one good joke about the dialogue not matching the caption cards. Then it is on to the set up of the plot. I like Sid Caesar, but there was no punch to any of the jokes in his scenes. He makes some funny faces that have very little context to the events on the screen and then we move on. The best bit here had to do with contagious crossed fingers, but why it is unique to a silent movie is beyond me. There are also two scenes in the film that clearly would not play in these politically correct times. The punchline involves three old ladies yelling the word "Fags".

On the other hand, the Burt Reynold's segment actually comes out pretty well. Burt make some fun of himself, there is an hysterical shower scene and then a classic old school comedy bit that falls a little flat involving a steam roller. I think this section works because Burt Reynold's knew how far to go in mugging for the camera. A little wink and a smile in the mirror is enough. James Caan on the other hand, overplays and then underplays the comedy bits he is in. Liza Minelli, is mostly lost in a bit that simply has her observing the antics of the three stars in Knight's Armour. Maybe this would have worked better with the clanking of the armor added in. As it was, it was maniacal without being funny. Paul Newman plays all of his part, sitting down in a motorized wheelchair, and it works really well, but not because it is Newman, but because they choreographed some good jokes in the chase. The payoff on the other hand works exactly because it is Paul Newman. Mel Brook's wife Anne Bancroft is in the film, playing herself, the best face joke is hers as she does a spot on Marty Feldman impression. There are also a couple of good visual jokes featuring the board of executives responding to a sexy image of Bernadette Peters.

I think the main problem with the film is timing. Brooks has a good ear for a funny joke and a good eye for a sight gag, but they do not flow smoothly or quickly. A keystone cops comedy should be paced like the race scene with Paul Newman, but the Three Stooges and Laurel and Hardy, had dialogue to help set up the jokes and that is missing here. For a movie that is supposed to be light and bouncy, it feels slow and methodical. Those few scenes that are planned, take a long time to play out, the frenzied stuff just seems a bit random and goes on too long. I saw this movie with Dan Hasegawa, when it first came out and we liked it well enough then. I have not watched it in the thirty four years since it's release until today. I've seen "Life Stinks" more times then this, and to be honest, I now know why.
Posted by Richard Kirkham at 7:20 PM