This is one of the strangest movies I ever saw and that includes "Lost Highway" and "The Teacher". This was a contemporary western, featuring one of our finest character actors, in a role that allows him to show us his range and abilities. It comes together though like a nightmare, with bits and pieces of information floating in front of us but never quite coalescing into something fathomable. Sam Peckinpaugh was noted as a Director of violent masculine themed movies, and here he hits all the notes but they are sour. I think we are supposed to have a bad taste in our mouths after this, but it really needs to be a little more coherent. This movie has a reputation among film aficionados, and it is probably deserved, but I can't really recommend it to anyone except Peckinpaugh completists. 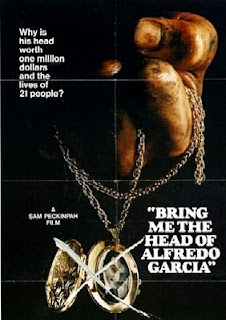 For years Dolores has given me a hard time about liking this movie. It is completely understandable why she would object. The main character is a disgusting slob, that sells himself out for money and doesn't really know what is going on. His girlfriend/fiance is a hooker, that really seems to love him and is maybe the one empathetic character in the film, and of course every bad thing you can imagine befalls her. Our third lead is a disembodied Lothario, responsible for impregnating a young girl, running away from her, whoring it up for three days and then dying off screen, all before he makes his first appearance as a head. Our main character Bennie, then spends days traveling around and carrying on a conversation with the dead guys noggin. Oh yeah, a whole lot of people die, some of whom deserve it and many who do not. All of this takes place in parts of Mexico that are not really on the tourist maps and that we would pay money to avoid. So the real question is, given all of that, why do I like the movie?

The number one reason I have already mentioned. Warren Oats was a guy that never became a big star, but he could make a movie better. He acts in this film, mostly with his mouth, since his eyes are covered by an ugly pair of sunglasses for 90% of the story. The character arc does allow him to grow and change as much as a man in his position could. He is not really a good guy, but by the end of the movie he is a righteous one. Compared to a slick revenge picture from today, a movie like "Taken", he seems way out of his depth. "Bennie" is not slick, he is sloppy and lucky and unlucky. He is more of the real world and therefore to a degree sympathetic despite his flaws. Oates gets some scenes of rage, self pity, romance, regret and stupidity. They do not always fit together, and there are long passages that seem like indulgences on the part of the director. Sometimes those slow moving sequences contain a gem of a moment, like the picnic under the tree, or the monologue with Alfredo in the shower. Other times they just seem slow, like Peckinpaugh is repeating the slow-motion part of the action scene in the dramatic scenes.

A second reason I like the film is the sleazy aura surrounding the characters. Not the locations, they are disgusting and not really something that hold our attention. I'm talking about the casualness with which Bennie falls in with Contract killers, who turn out to be sub-contractors for another group of contract killers. This makes "Bennie" the pilot fish of the food chain. Excited about the scraps he is going to get, and not realizing how much bigger the reward really is. Gig Young an Academy Award winner, and Robert Webber an actor we talked about before in this blog, may be gay, may be simply slumming it but they ooze silky creepiness. Their characters are in one big shootout that is set up very well and executed the way it should be. A later shootout with the higher ups has some of the same greasy slimy businesslike manner of doing things. The final shootout is an anti-climax except for the actions of the girl who bore Alfredo Garcia's bastard child.

Finally, I like the movie on general principles. It is a revenge story, which I always find satisfying. There is slow motion violence, which I first saw in The Wild Bunch and Bonnie and Clyde, and it seems so much more real and awful when it happens that way. Also, let's face it, this may be the Coolest title of a mainstream movie ever released in the English language cinema. You know what is coming at you from those seven gruesome little words. 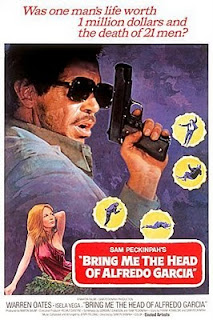 Posted by Richard Kirkham at 7:00 PM