I love John Wayne. He was the biggest movie star in the world before I was born, and I saw as many of his movies as I could when I was a kid. Of course I watched him on the afternoon matinee on channel 9, or the Big Picture on channel 2. If there was a late show on a weekend night I'd try to see that too. I didn't think it was enough to see him on TV however, I really felt that the theatrical experience was required. He was an aging star by the time the seventies came along, and the parts did not always fit him well. He tried to match Dirty Harry in films like Brannigan or McQ, but his hairpiece and age made him seem out of place(by the way I saw both of those in Theaters and loved them despite the creakiness). If ever there was a character type made for an actor it was the role of cowboy for John Wayne.

By the 1970's, the Western genre was dying out. Clint Eastwood still made them, but for the most part they had returned to being "B" pictures, and after the influence of Sergio Leone, they were usually bloody as hell. John Wayne made two of his best western pictures in the 70's. "The Cowboys" allowed him to play a realistic part as an aging rancher, faced with leading a group of kids on a cattle drive. He got to be Duke, but did not have to do all of the action scenes, and he is off-screen during the climax of the film. It was a terrific film but it was not a summer release, "The Shootist" was. This was a part that fit Wayne like a glove, they used clips from a dozen of his earlier pictures to set up the back-story of the character that we meet. He is a legendary gunfighter, past his prime but with more dignity, guts and talent than anyone around as the movie starts. The film is set in 1901, so the new century is taking over for the old, and the ways of the past are not always held in high esteem. There were exceptions in this movie; a young kid who knows the history of this particular gunfighter, a couple of wanna-bees that missed the showdown in the street days of the old west, and an ornery man with a grudge who remembers the past too well. J.B. Books encounters all of them in his last days in Carson City. He is dying of cancer and trying to figure a way to do so with some self-respect. 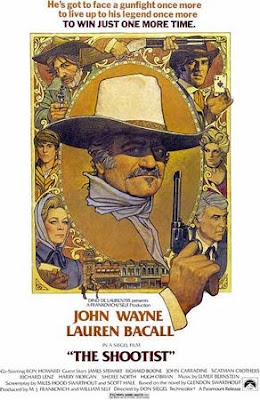 John Wayne plays Books so easily because he had faced cancer himself. He had played all of those parts for fifty years, and he would face cancer one last time in the not to distant future. This was his final screen role and he was exactly what was called for. I love the fact that this movie was directed by the great Don Siegel. Siegel is one of the two directors that Clint Eastwood dedicated his movie "Unforgiven" to(the other being Leone). The guy that made three westerns with Clint Eastwood and directed him in his signature role in Dirty Harry, made the last movie John Wayne was ever in. There is poetry in this, and anyone that thinks the universe is a series of random accidents ought to consider the unique way these circunstance came out. It is just plain cool.

If you watch the trailer, you will see that there is no shortage of talent on the screen. Jimmy Stewart re-teams with Wayne, a co-star in the Man who Shot Liberty Valance. John Carradine has a scene as an undertaker, he must have played such a role before because he seems perfect in it. Hugh O'Brien, has a part that is not huge but it is flashy, and after playing Wyatt Earp on TV for so many years, it was great to see him in a Western on the big screen with Wayne. Richard Boone also was a TV western star, he had worked with Wayne a couple of years earlier in Big Jake. Lauren Bacall, has a really solid part in the film as the boarding house owner that gunfighter Books takes a liking to. They do the bickering flirt dance a bit, but she ultimately has to accede to his request not to argue with him about his final choice. Ron Howard was a good young actor, but in the long run it seems he made a smart choice in moving behind the camera. His earnest manner and face would probably not get him many parts when his youth left him.

It is sad to know that we live in a world where we can't expect a new John Wayne picture, but it is grand to know that even among today's young moviegoers, the name John Wayne still means something (even if they haven't seen any of his movies). I like playing the John Wayne slot machine when I am in Vegas. I don't know if Mr. Wayne would approve, but in a way, it helps us hang onto that image of him as the primo cowboy of the century. I am pretty sure I saw this movie by myself in 1976. I can't explain why that would be the case, but I did luck out because no one I knew got to see me cry at the end of this film. It is even tougher now, knowing how Wayne left us three years later. There are a lot of good quotes from the movie, but I will leave you with this visualization of the values J.B.Books shares with young Ronnie Howard's character... 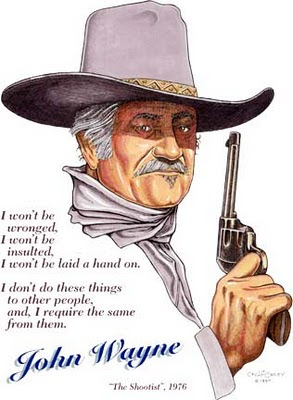 Posted by Richard Kirkham at 8:08 PM