OK, I admit it, I'm an intellectual midget and I like giggling, so this movie is for me. This has always been, from the moment I first saw it, the funniest movie I ever saw. I have laughed at this movie for thirty-five years. Every time it comes on, all I have to do is see a small section of a single scene and I start cracking up. The silliness of the production, the clever language and the stupid sight gags are chuckle inducing, and if you disagree, your mother was a hamster and your father smells of elderberry.

Speaking of your father, as strange as it may sound, I saw this with my father. I have written before that my Dad would sometimes give me a hard time about movie going, but some of the best memories I have of him are those times we went to a show together. A family outing was special, but going to the movies, just my Dad and I was usually a big treat. My Dad did not fish, hike, play golf, watch baseball, or any other activities that fathers and sons have enjoyed over the years. We sometimes watched football together. Both of us rooted for the Rams and the Trojans. Sundays, in Southern California meant checking out the football game on TV. Often there was no game because of the blackout rules of the day. When that happened we would watch an old Sherlock Holmes movie or some classic Warner Brothers film that was on the Sunday Matinee. My Dad was not much of a TV guy though, and if I could find something to talk him into, we would go to the movies together. 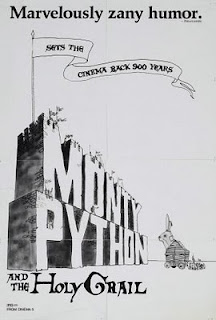 We saw this movie at the Century Theater on Las Tunas, in San Gabriel, on a rainy overcast day. This must have been a weird summer, because in So Cal you don't get a lot of those kinds of days in the summer. I had heard about the movie from someone, but I don't remember who suggested it. We could barely get PBS on the TV so my knowledge of Monty Python was next to nothing. The only UHF channels I remember seeing as a kid, were Mexican stations that carried the bullfights. My Dad seemed to really enjoy stories about bullfighting, I think he must have read Death in the Afternoon. Anyway, I somehow got him to go with me to see Holy Grail. The poster for the movie at the theater looked really cheap. I remember it was basically a line drawing and the title, but my Dad did laugh at the tagline comparing the movie to Ben Hur. It was a double feature and we first sat through a George Segal comedy called "Where's Poppa?". We both laughed at some of the broader bits of that forgotten gem and hoped we would enjoy the feature that brought us there in the first place.

Then the movie started, and the opening titles begin to give credits to moose, their handlers, make up artists etc. The music was pompous and somber and the juxtaposition of music and silly title credits began my father's laughter. Now I had heard him laugh before of course, but not like this. There were deep guttural chortles and higher pitched guffaws that I never remember hearing from him before. When King Arthur and Patsy come over the hill, feigning horseback riding using coconuts, well the phrase "gut buster" was created for that. I was laughing really hard, but I was still worried because my Dad could hardly catch his breath he was laughing so much. We had a tough year in 1975, my older brother Chris had died in April and none of us was anywhere near over it. My Mom practically became a recluse and the only thing that finally got her out and about was having to drive me to USC in the fall for school. Monty Python and the Holy Grail, was the start of my Dad's recovery. Maybe he just needed something to push himself out of the funk. I would never have guessed he would like this movie, with it's strange British humor and funny looking men playing women. Something in it set him going and I was grateful for that and happy that we were sharing something between just the two of us.

"Holy Grail" is revered by geeks everywhere. Kids were doing the Knight's who say Nee at lunch time for their friends. The insults hurled by the French soldiers are classic lines that will be cited as if they were Shakespeare, by people a century from now. Two years ago we spent an evening in Vegas at Spamalot, the Tony Award winning Best Musical that is based on, or ripped off from Holy Grail. Entertainment is a resource that is scarce and to be valued, you deny yourself that resource if you don't see the musical play. And if you have never seen and do not intend to see Monty Python and the Holy Grail, then I fart in your general direction. 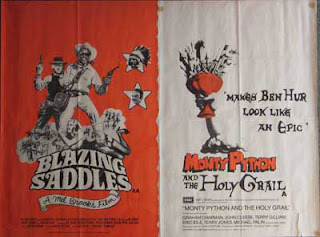 Posted by Richard Kirkham at 10:54 AM

This post made me cry. I've never really heard you talk about that time in your life and I'm glad you're doing this project because I get to hear stories about when you were a kid, like this and hear a different side of the experience. I sometimes miss having grandparents around, especially during the holidays but I love hearing stories of them when you and mom were younger. The situations they got into and the funny things they did. It makes me happy to know that in the middle of something so tragic you and grandpa were able to share some laughs at a film that Allison and I now get to enjoy with you. Some of my favorite memories of movie going experiences are when it was just the two of us. I'm lucky to have a dad that loves film as much as I do and shares a similar taste. I love you and keep up the good work.

This film holds such a solid place in my heart as tremendous comedy, that all other Monty Python films, by comparison, don't hold much water for me. Never really cared for LIFE OF BRIAN or THE MEANING OF LIFE.