Double O Countdown: For Your Eyes Only

I really liked that this movie brought James Bond back to Earth. The story is more basic, with a MacGuffan that everybody wants. The bad guys are not megalomaniac bizillionaires trying to destroy the whole planet, they are just evil spies, willing to sell out their friends for money. I also like that the film has a revenge theme that it took from the collection of short stories that this title came from. There are a couple of things that hurt it a bit, what the hell is Lynn-Holly Johnson doing in the story, and we could do without the Margaret Thatcher parody at the end. Also, the Chief of Staff Bill Tanner was Bond's friend in the books, here he is an insufferable snob with delusions of replacing M, it may be my least favorite character in all the Bond films. Let's not dwell on the bad however, instead, enjoy the seven best things in the film.


Bond is interrupted in a moment of reverie at the grave of his lost bride. It is one of the few times that plot point ever comes up in the series.

A helicopter has been dispatched to bring him back to headquarters, but low and behold, a familiar bald headed, cat stroking figure in a wheelchair seems to have taken remote control over the copter. 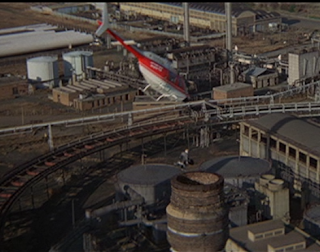 Because SPECTRE and Blofeld are part of the ongoing litigation with another producer, the character is never identified, but every Bond fan knows who it is supposed to be. The scene did play a bit with a comic touch but the result is a lot more satisfying than leaving the character hanging in a bathysphere while an oil rig blows up around him. Naturally 007 regains control of the copter and then turns the tables on his old adversary.

This is the sort of nasty exit we want for Earnst Stavro Blofeld. Dropped by Bond down a hole from which there will be no escape. Even hearing him plead comically with Bond doesn't take away from the fact that Tracy's killer has finally met his doom.


After storming a space station and an underwater city in his previous adventures. Bond has to follow his enemy to a monastery on a rock that is basically a fortress in the clouds. Before Tom Cruise di all his climbing stunts in the Mission Impossible Series, James Bond was a mountain climber ahead of his time.


One more time, sharks are supposed to be the end of James Bond. This death is actually planned for Bond and Solitaire in the novel "Live and Let Die" but gets transposed to this adventure in the Aegean rather than the Caribbean.

Captured and tied up with Melina, a great Bond girl who can take care of herself.

They get yanked off of their boat and dragged across a corral reef, to bring blood and sharks

Of course they foil the plan and a nameless henchmen gets eaten instead.


For a guy who does not like the snow, I'm a sucker for ski sequences, and this one is pretty good, featuring a ski jumping hill and biathlon and motorcycles.

Bond lucks out as he is forced to ski down a giant slide, where at the bottom, the villainous Eric Krieger, East German Biathlon champion is waiting to shoot him. Another henchman ends up chasing Bond on the slope and Krieger does not know which figure to shoot. 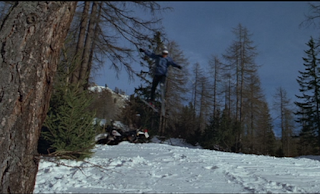 Bond flees down a cross country style slope, avoiding the killers by twisting and turning in mid air.

More henchmen on motorcycles equipped with spiked tires pursue him through the woods.

And frustrated man mountain Krieger flings his motorcycle ineffectively at the escaping 007.


Bond has believed that intelligence informer Kristatos is his ally. He has told Bond that the likely killer of his station head is a smuggler known as "the dove" who is actually a former war partisan and partner of Kristatos called Columbo.

In a plot point right from one of the Fleming stories, this whole tale was told at dinner and the center-pieces on the table contain a tape recorder that allows Columbo to here Bond agree to kill him. Imagine our surprise when it turns out that Columbo is the real patriot and Kristatos has been describing his own criminal actions as those of his former friend.

The delightful Topal, the star of "Fiddler on the Roof" plays Bonds new ally. Together, they take down a heroin storage warehouse in a solid action scene.


The Scottish chanteuse sings the title song and is the only artist to sing a title song whose image appears in the credit sequence. It's a music video just as MTV was getting started. It also serves as commercial for the film.

007 Once more Roger Moore gets a shot at being a Badass.


The killer Locque, who Bond and Melina have pursued, is at the warehouse when Bond and Columbo make their move. He escapes in a car that travels up a steep set of switchbacks on a hill. Bond id determined to get to him and runs flat out up a series of staircases that are a more direct line to the top of the hill. 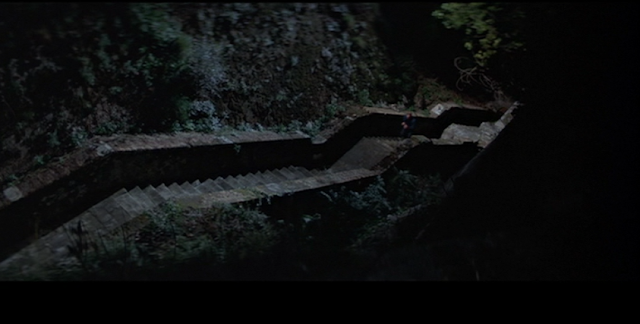 At the top, in a tunnel that the car must go through, Bond stops and takes aim.

Locque is shot in the shoulder, loses control of the car and it veers to the edge of a cliff. 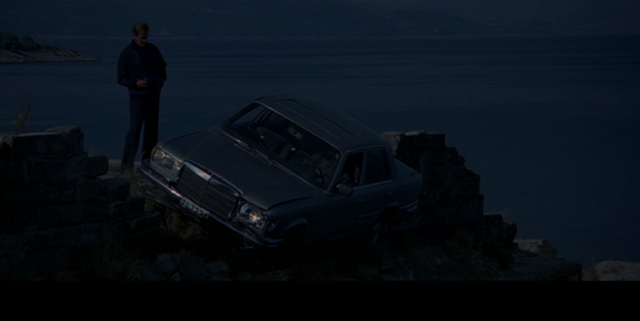 Bond confronts the killer and delivers a message, returning the dove pin that Locque left on the body of Bond's colleague. 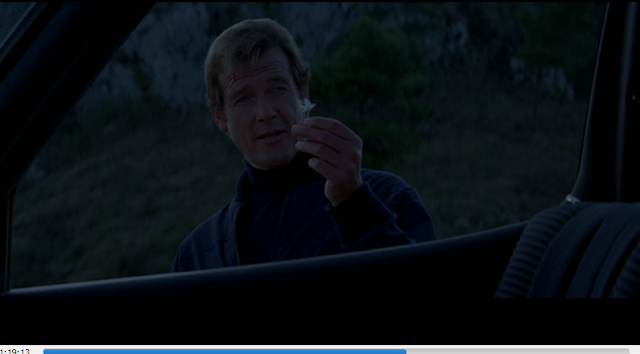 And then, like he did in "The Spy Who Loved Me" and in "Dr. No", Bond shows that he can be a cold blooded bastard, and the film is better for it. He kicks the car an that is the end of Lpcque.

James Bond will Return in "Octopussy".
Posted by Richard Kirkham at 12:22 PM

Very anti-climactic ending in this one.

Can't disagree on that.