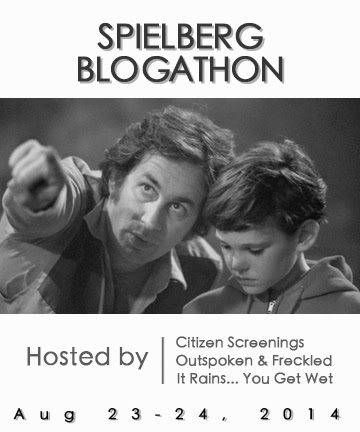 Steven Spielberg is rightly credited with being the most effective visualizer of stories working in the last forty years. He took a liability like a non-functioning mechanical shark and managed to create an extremely visceral film out of it. That "Jaws" works is largely a function of his ability to feel how a movie will play to an audience. He took the extra step when making that film, of shooting additional material in the pool of one of his collaborators, to get the audience reaction right. The opening of "Raiders of the Lost Ark" is a litany of visual and emotional elements from the Saturday serialized films of the Golden Age, but updated and intensified as only Spielberg has been able to manage. The brutality and honesty of the first half hour of "Saving Private Ryan" is a testament to being able to connect with an audience's emotions in the strongest possible ways. Plenty of horror films have been as graphic and disturbing, but none have carried the power of those horrifying images the way that this World War II film managed to do.

Many have criticized his sentimentality in visual language. "Warhorse" although successful has been savaged by some for the Spielberg palate of color, lighting and cinematography. Had the film been made by someone other than Spielberg, it would be seen as a piece of artistic achievement rather than a three handkerchief cash grab. Some pretty picky elements of "War of the Worlds" earned that film scorn from some, even as it delivers the kind of frenzied panic and fear that audiences had not experienced since "Jaws" thirty years before it. He was hammered again for "Indiana Jones and the Kingdom of the Crystal Skull" for letting CGI and Shia LeBeof come between the fans of the series and the story being told. The same creative elements in "Minority Report", at least the visual ones, become a source of strife in other pictures. Like all artists, he cannot please every audience every time. There is one skill that he has managed to use consistently, without the same kind of criticism his visualization of a story sometimes gets. That talent is the directing of actors to excellence on the screen. Some of the finest performances over the last four decades have come from actors working with Steven Spielberg.

It is true that a talented actor can pull the weight of a movie on their shoulders and carry it for the audience, but they can only do that with a supportive director who knows what the story counts on. With young actors or inexperienced film actors, the role of the director is even more important. George Lucas has a great instinct for what looks good on screen. He can tell a story that will pull the audience in most of the time, but he does not seem to have the right touch with actors in the same way that Spielberg does. Martin Scorsese develops a troop of actors to work with and as they tune into him, they become more and more reflective of his sensibility. Robert DeNiro and Leonardo DeCaprio have worked with Scorsese on multiple projects. Spielberg has only one actor that he has featured in more than three films (Unless you are pretending that Crystal Skull does not exist). People may not realize it but Tom Hanks has only been directed by Spielberg three times in a starring part. To get a great performance out of a great actor is still difficult. There are plenty of pairings that did not pan out, but Spielberg manages to get actors in the right frame of mind, to give them the space to do their best work or maybe he just exerts enough control to stifle the actors excesses.

Casting and script are part of the process as well. I don't mean to suggest that Spielberg can magically turn a marginal performer into an Olivier, but he can make sure that the right actor is in the part and that their strengths are played to. A good example is Christopher Walken. 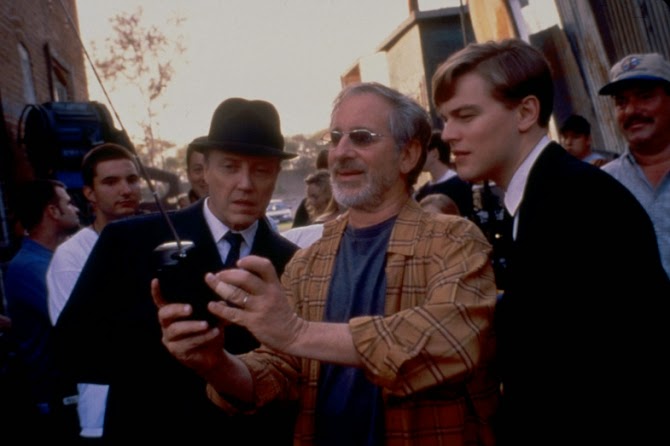 Walken is an actor loved for his eccentricities and quirks in delivery. He may be the most imitated actor around because his voice and mannerisms are so distinctive and therefore more easy to imitate. In "Catch Me If You Can" he gives an Academy Award nominated performance that is largely successful because the usual quirks are held to a minimum. Instead of being a cartoon, which is how he is usually used in movies, Walken is given a chance to be a real human being. His flaws are not overplayed and the natural way in which he interacts with the other performers is far different than, oh let's say, his three minutes in "Pulp Fiction". Spielberg knows what he wants from his actors and it appears from the product that he knows how to get it. 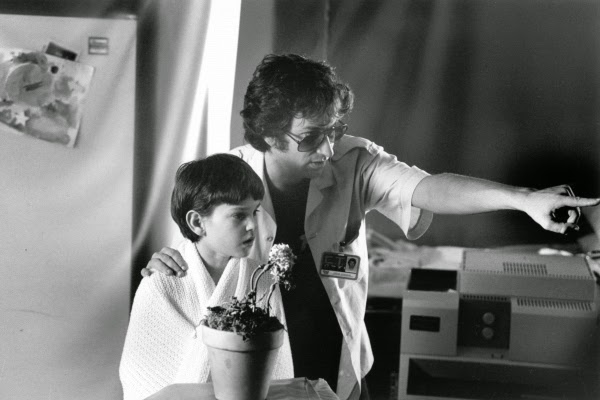 He is perhaps best known as a director of actors for his work with children. The main child performances in "E.T." are the source of this reputation. Henry Thomas is the lead, and he carries the movie, but he could not have done it without the help of a patient director. I recently watched Thomas's next film, "Cloak and Dagger" and while he is a good screen presence, he lacks the depth and naturalness that came from working with a knowledgeable actors director. It had to have helped the kids immensely to have shot the film in continuity so the kids always knew where they were in the story for their performances.  Christian Bale delivers an amazing child performance in "Empire of the Sun". Both of these young men are talented performers but it took Bale almost twenty more years to break thorough as a widely recognized acting powerhouse. Both of these films depend on the child performer to carry the picture. Unless you are cast because you are cute, hot or a well known commodity, it is hard to imagine a kid without a strong director being able to hold an audience in their hands. 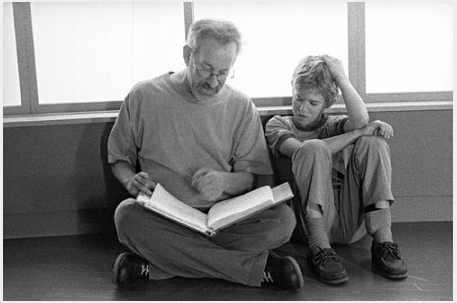 His one obvious failure in this area was with "Hook" which was filled with so many kids that most of them don't get a chance to have personality and those that do are burdened with the broadest kinds of direction possible. Maybe Charlie Korsmo was adequate in his role but the other kids ran over Spielberg with their quirks. On the other hand, the kids in "Jurassic Park" are excellent, and you will believe Haley Joel Osment is an android. 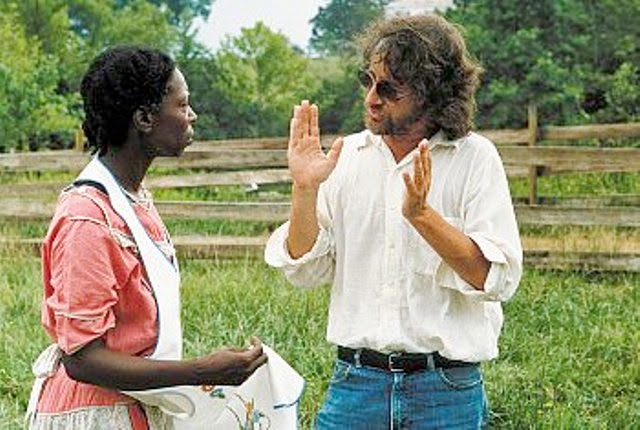 Spielberg has had the advantage of working with many established stars but it is the first time or novice performers that he has been able to get the most out of. First time stars Oprah Winfrey, Whoopie Goldberg, and journeyman actress Margaret Avery were nominated for the Academy Award in their first major roles. Directors get credit for so many things on the set that they may have little input on but the one thing they have the most control over is the casting and performance of the actors. Sometimes the director does get lucky. In the movie "Lincoln", Spielberg had had his heart set on Liam Neeson for the title role at first, but as time went on, minor differences emerged in how the two saw the character being portrayed. After the project was repeatedly put on hold Nesson bowed out. I have no doubt that he would have given a towering performance but when Daniel Day-Lewis is your fallback casting, and he is driven to make the character come to life, fortune has smiled on you. 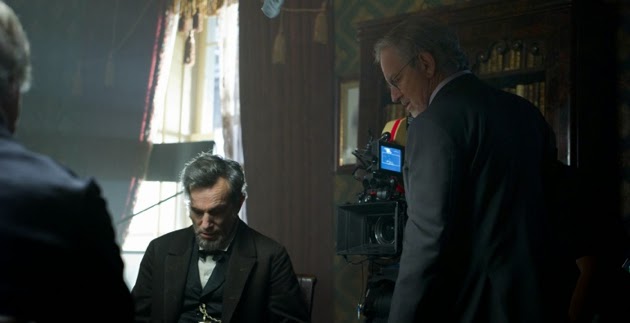 I've not read enough to know how important Spielberg was to Day-Lewis' performance, but I do know they kept late hours and shared information and inspiration even in the middle of the night. It is an interesting piece of trivia to note that of the dozen actors Spielberg directed to Academy nominations, Daniel Day-Lewis is the only one to have actually won. 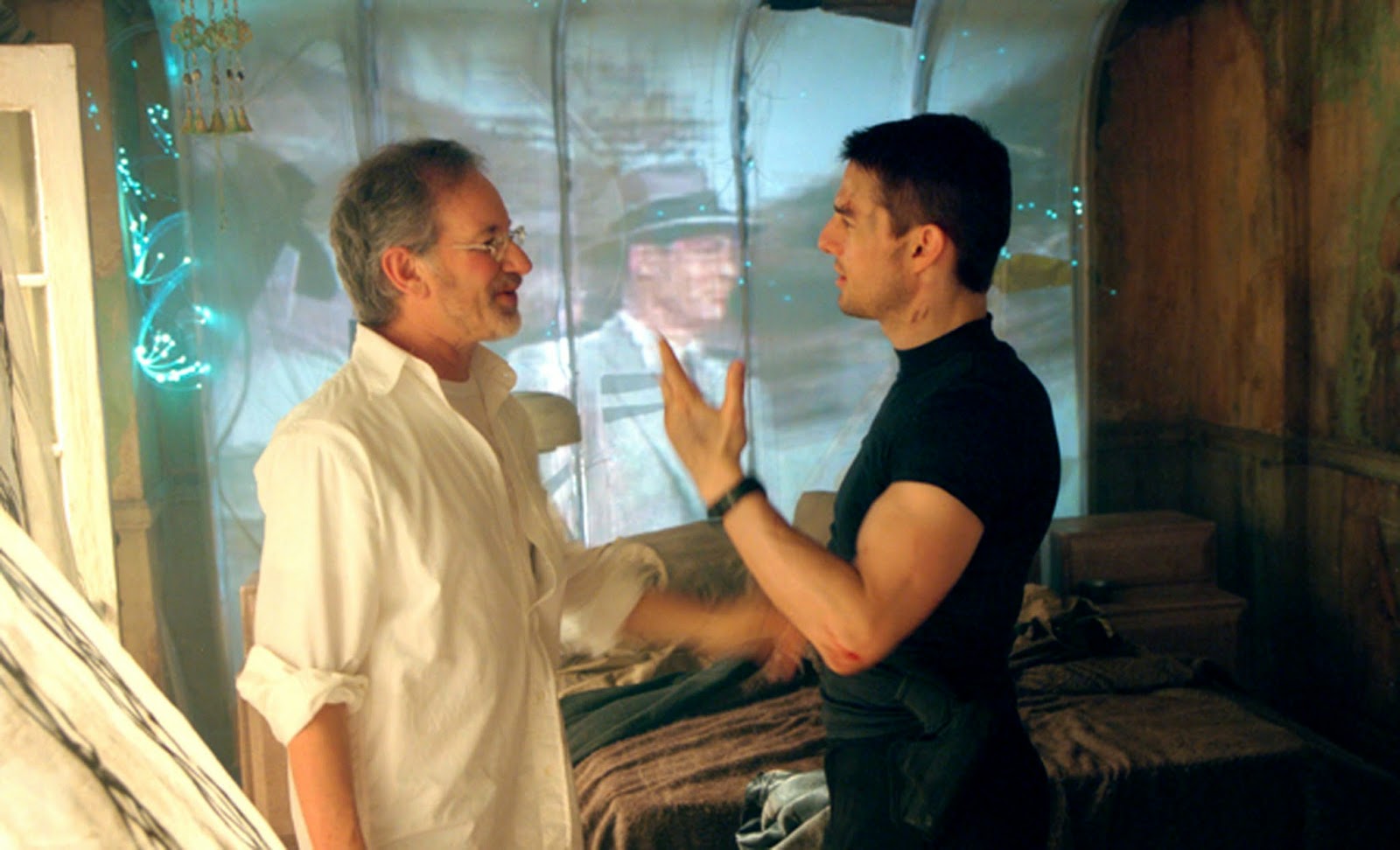 Tom Cruise made two appearances in Spielberg films as distraught fathers. He has to sell the characters demons and weaknesses in both films while also handling an incredibly physical performance in front of green screens and doing stunt work. If you compare his performances in "Minority Report" and "War of the Worlds" to other roles in action films, there is a level of quality to those performances that certainly was enhanced by working with Spielberg. Nothing in "Oblivion" comes close to the anguish that Cruise displays when confronting the pre-crime scenario that John Anderson goes through as he confronts the man he believes took his child. Because this performance is buried in an action film it is easy to overlook the quality of work that the two of them achieved here. 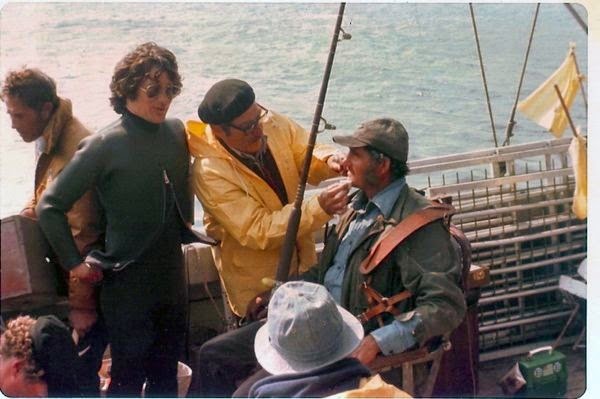 While all three leads in the movie "Jaws" were excellent, there are two performances that stand out. The flashy role and the greatest match of actor to part I can think of is the pairing of Robert Shaw with the character Quint. At least four sets of hands were on the script for the famous monologue, Spielberg knew what words mattered and enhanced the performance with camera work and sound design that makes that moment one of the essential film scenes ever.  The second performance is one that is often overlooked, Roy Scheider as Chief Brody is subtle and sometimes heartbreaking. Spielberg knows how long to let some of those moments linger in time. The dinner table scene is a wonderful example of the creativity that can come out when the director and the actor work together. 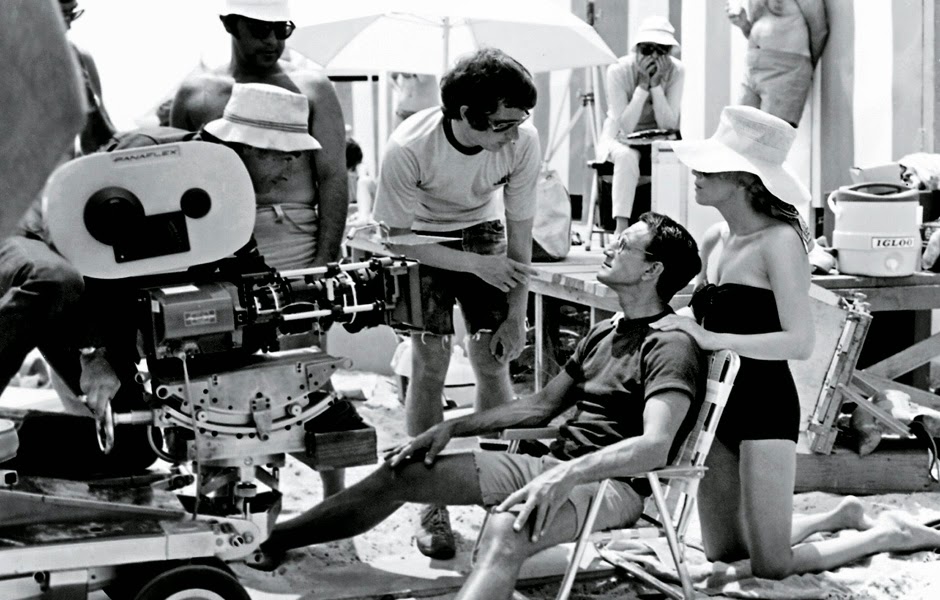 "...as an adult, filmmaking is all about appreciating the talents of the people you surround yourself with and knowing you could never have made any of these films by yourself.”--Steven Spielberg

Posted by Richard Kirkham at 12:22 AM