This movie came out twelve years after Psycho and repeated some of the horror from that film although it has a much different tone. The use of black and white in Psycho seems to me to make the film more stylized than Frenzy. The murders that occur are disturbing in both films but they seem more mundane and at the same time horrifying in Frenzy. Alfred Hitchcock was the greatest director of cinema thrillers ever. Horror was often a part of the work but he did not really make traditional horror films (although he might be credited as the father of the slasher film). As has often been said, he repeatedly made films about the wrong man in the wrong place being wrongly accused of a crime. When that man runs, the question becomes how will he clear himself or stop an additional crime?

We are given very sympathetic women in this film to fear for. Richard, the wrongly accused has an ex-wife that still cares for him and a casual girlfriend who is falling for him as the plot unfolds.Neither of the women are classic beauties,like Grace Kelly or Tippi Hedrren. They are nice looking English women that anyone in the audience can see are salt of the earth types. These are two of the links that point the finger of justice at our main character. Hitchcock's heroes are usually flawed; Janet Leigh was a thief, Jimmy Stewart was subject to heights, even Cary Grant drank too much in North by Northwest. One of the weaknesses of Frenzy is inherent in it's structure. Richard is the man we are asked to identify with, but he is an angry and bitter man. He drinks too much and becomes abusive of those that try to help him at various points. He needs to have a reputation for violence or a mean streak, to build police suspicion of him. This tendency to lash out though distances him from us as an audience, more than is probably wanted. At the end, when he breaks out of jail, he is not searching for exoneration like Richard Kimble, he is looking for vengeance on a truly evil figure that has put him in prison for the crimes he actually committed himself. This means that he is a lot less sympathetic and the suspense of whether he succeeds is undercut by that. 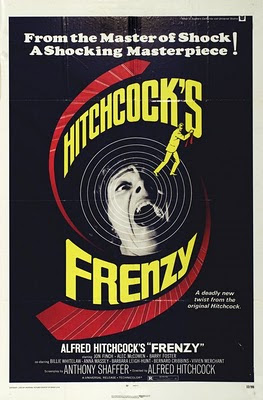 The first murder we see is extremely unpleasant. More recent films have gone even further in showing the viciousness and degradation and horror of a rape-murder, but in the confines of a mainstream picture from a big time director, this was really unusual. The close ups of the victim and the frenzied whining of the killer of the word "Lovely" as he assaults her is stomach churning for people with a moral conscience. It is needed to show the killer's depravity but also to spare us from having to witness it in subsequent murders. We will be haunted by those events later on. The second murder in fact is not really shown in any detail except in brief storyboard flashbacks. Instead of repeating a sequence that is harrowing, we see the victim innocently being lead into the apartment that she will not emerge from alive. Then the camera pulls slowly back, descends a narrow winding staircase and pulls out onto the street. An everyday street scene is taking place with produce being moved, shop girls going to lunch and business men walking to meetings. The camera pans up to the exterior window of the apartment we just left and we all know what horror is going on there while everyday people walk by unaware. A victim would be tortured just by knowing that outside the window and door are people that might have saved her if only they had known.

Previous Hitchcock films had touches of humor but none as morbid as those found here. There is a terrifically suspenseful sequence in which the killer tries to recover a clue from the body of one of his victims. He ends up wrestling with a body in rigor mortise in the back end of a truck full of potatoes. It is a sick little joke that makes the movie more tolerable, despite this grotesqueness. This terrible circumstance is happening to our villain and although the girl is dead she extracts a little bit of retribution on him. The detective following the murderer has several sequences of unappealing meals that he must somehow get through, while his wife plants doubts in his head about the suspect Scotland Yard is pursuing. These comedic sequences puncture the murder and aftermath at different times. The horrid meals she prepares mean that he is going to focus on something other than the food, and that is the guilt or lack thereof of our titular hero. The closing line of the film actually makes the story sound like a long set up for this punchline. So although it is a pretty violent film, it has more humor in it than many of Hitchcock's other works.

I remember this film from two distinct showings. Neither of the times I saw this in a theater were part of the original release of the movie. The first time I saw it was during the U.S.C. Summer debate workshop. The movie was screening late one afternoon in a large auditorium style classroom in Founders Hall. There was probably a fee to get in but I went in after the movie had started so no one bothered to charge me. This was the summer of 1973 so it was a year after the movie had been released. Later that same year or early in the next, I saw it as a second feature at the Gold Cinema in Alhambra. It might have been playing with one of the sequels to the Magnificent Seven, probably a cheap rental for the theater at that point because that would be an odd pairing. I was too young to have seen Psycho,or The Birds in theaters in the 1960's. So this was my first exposure to Hitchcock in a true theater setting. I also saw his last work,"Family Plot", at the same complex in the much larger Alhambra Theater just a few years later. It was not a summer release so it is not on my list for this project, but I will say that the tone of that movie is starkly different from "Frenzy". I'm just glad I got to see a couple of the great ones's films in a theater while he was still alive.
Posted by Richard Kirkham at 12:48 PM