Amanda watched this with us, and she said it didn't frighten her except for a few jump shots and gotcha moments. Of course she watched this from behind a blanket curled up in a corner of the couch. Even if it didn't get to her, I'm perfectly willing to admit that it got to me. This movie in no way has the intensity or impact of a film like the Exorcist or Alien, but the creep factor was quite high from my point of view. There were several scenes that made me jump and almost a dozen that made the hair on the back of my neck stand on end. It works very well as a fright film, and I thought the intensity at the end was a satisfying finish for the movie. 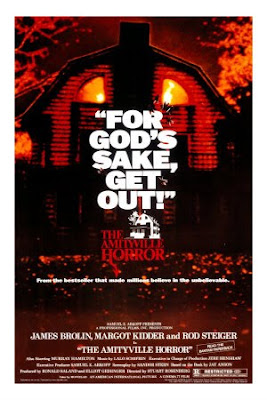 Haunted House movies usually work for me. I have already written about the Legend of Hell House earlier in the summer. If I ever repeat this project for films of the 1980s, you can bet that Poltergeist will be on the list. We are big fans of the Television show "Supernatural" and my favorite episode usually involve some kind of haunting. It may be that Amanda is such a fan of the show that she is a little jaded in regard to the traditional creaky/spooky house bits. I on the other hand respond to the usual suspects the way the film makers usually are looking for. When I noticed the name of the Director tonight as I was watching the opening, I was not surprised that the movie works. Stuart Rosenberg directed the fantastic Cool Hand Luke in the 1960s, and in the seventies he did a couple of very nice Paul Newman movies and a thriller called the Laughing Policeman that I had always liked. This movie is very competently put together.

Let's start with the script. It is based on the bestselling book of the time. I know there have been a number of follow up stories that debunk the story as being true. It has even been suggested that the whole thing was a hoax. I have never read the book and I did not follow the rebuttal stories very closely. I never went into this thinking it was a documentary. I guess those who did were hoodwinked the same way that people who thought the Blair Witch Project was real were taken in. I just looked at it as a good story. It has all the needed parts to pull us in; a young couple newly married with kids from a previous relationship buying a dream house, a background story that sets up the drama and horror before our main character even take the stage, and several subplots about satanism, Indian burial grounds and just weird local history. There are not a huge number of special effects and the three that stood out might seem a little cheesy. At one point we see a set of glowing eyes, then there is the image of the lead character that floats into a hidden room, and what looks like a giant creepy rat in the little girls room at the end of the film. Two of these worked well despite being a bit iffy. The floating head image of James Brolin is the one photo effect that just falls flat. I'll tell you what image of Brolin does work scaring us, his face staring up at the audience from the year old newspaper photo of the murderer in the opening sequence. 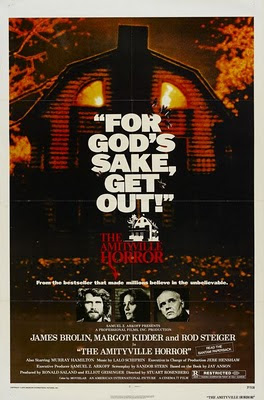 The actors are fine, Margot Kidder did this movie between the two Superman movies she was featured in. She is a nice looking woman that is not beautiful per say but comes across as sexy and appealing in an everyday kind of way. I have not seen the remake that came out a few years ago, but my guess is that it is populated with pretty people. That kind of casting takes us out of the reality of the story. Sure James Brolin is a good looking man, but we see him deteriorate in front of our eyes. The kids are cute but not model cute. And all the supporting players are plain, they were hired for the roles they were playing not their looks. This was a low budget film made by American International Pictures, but they spent the money to make a film competently and to make it creepy. They did not try to sell us on the movie based on how fantastic everything looked. The music was by Lalo Schifrin. He did the music the year before for yesterdays movie "The Cat From Outer Space". Also Rollercoaster, Enter the Dragon and a couple more films on my list for the summer. He is best known for writing the greatest TV theme this side of Hawaii Five-0, The Mission Impossible theme. For this movie he really did a great job, the eeriness kept going even when conventional story elements were on the screen. I thought this evening while I was watching it, that this was one of the better scores I had heard this summer. When I looked it up, sure enough he was nominated for an Academy Award for this score.

Dolores and I went to this movie with Kathy and Art in the legendary summer of 1979. We saw it at the Rosemead Four theater. This was one of the first of the AMC style multiplexes, the theaters were small, the lobby smaller, but the popcorn was good. This theater is long gone and they don't have a screen in the area anymore at all. We all enjoyed it and the girls were particularly creep-ed out. Maybe as I have gotten older, I have lost some of my nerve and I am now easier to scare. I just thought this movie worked. OK, maybe going back for the dog seems tired and stupid to moviegoers today, but that is only because they did it here first and a thousand others followed (Don't forget, Ripley went back for the cat).
Posted by Richard Kirkham at 8:03 PM

I barely, barely remember this movie (I saw it forever ago, before I was even REALLY into films). But I do remembering it being a little creepy.. which is always awesome when watching a horror film (especially with the crap out these days).

And I do love Supernatural myself!