After Jaws was a huge bestsellar, and after it became the biggest movie in history, the author Peter Benchley was hot, hot, hot. He wrote several more books that featured nautical themes. The most successful of his non-Jaws works was "The Deep". Film makers were quick to grab onto his concepts and turn them into commercial properties. I have never read any of his novels except Jaws. It is an OK book, but a much better movie. I have even told Amanda that she should not taint her movie crush on Jaws by reading the novel. The Deep on the other hand is not in the same class. It is a fine film but not on the same plane of existence as Jaws, although the makers of the film did everything they could to keep the idea of Jaws in the audience's head while promoting the movie. 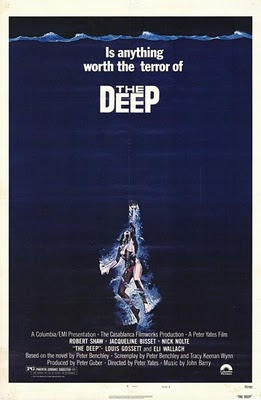 Of course the first thing to exploit was the name of Peter Benchley as the author. You heard it mentioned in the trailer, radio ads, TV ads and on the poster. Speaking of the poster, it is a reversal of the original Jaws image, the struggling girl is under the water trying to reach the surface instead of being on the surface threatened by something under the water. Even the color palate of the poster is reminiscent of the earlier film. Finally, they may have killed off Quint in the 1975 classic, but they try to revive him in this movie. Robert Shaw returns, not as the same rough-hewn fisherman, but as a well know treasure hunter that also knows the ins and outs of the local criminal scene. He doesn't have the same colorful mannerisms, but he has all the testosterone that a movie like this needs. Nick Nolte should have been enough, but his character is young, eager and although skilled at physical challenges like climbing Mt. Everest, he lacks much direction. It takes an old salt like Treece to show the young guns how things really work. 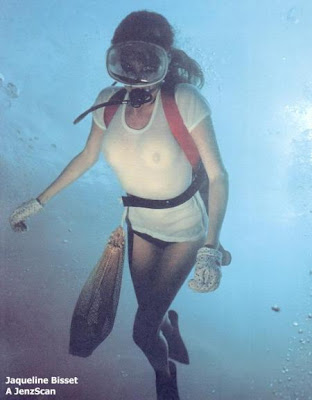 The biggest asset in promoting the movie was probably not any of these things. The other star of the movie is Jacqueline Bisset, and she earns half of the movies take in the opening scene of the movie. She was and is one of the most beautiful women to ever appear in films. In this movie, she is diving and searching through the sunken ship in the first segment, wearing a white tee shirt and her diving gear. This is where the idea for wet tee shirt contests came from. She is not nude in the film, but is tantalizingly close to it and that image was on posters and in movie magazines, so you know that the male segment of the audience came looking for her. The movie business changes in the 1980's, teen films featuring topless actresses would become ubiquitous, but in 1977 unless you went to a grindhouse or a drive-in, you did not see this kind of image, and no one in any of those kinds of movies ever looked like Jacqueline Bisset.

This is a great summer movie for some very basic reasons. There is adventure in the treasure hunt, danger in the shipwreck and on the land, and a beautiful woman in jeopardy, that everyone wants to see succeed. The opening segment brings in the under sea danger and sets up the resolution of the movie very clearly. It is telegraphed but not in such a way that we don't care when it happens. There are two or three good fight scenes that are violent and in two of the situations events come out the way we would hope for our heroes. Nick Nolte and Jacqueline Bisset are the eye candy, they are a bit stiff and shrill in their performances, but they are a good looking couple that the audience can identify with. Robert Shaw gets to match wits and acting talent with two well know scene stealers, Louis Gossett Jr. and Eli Wallach. Both of these pros bring exactly what is needed to the proceedings, a little bit of honest acting and some menace to ratchet up the tension. The music for The Deep was written by John Barry, a guy who did more James Bond films then either Sean Connery or Roger Moore. The score is effective but not obtrusive until the final credits, and then we get a disco tuned theme song. In the film as I looked at it today, we don't get a vocal performance, it may be somewhere in the background of the movie, but Donna Summer is credited with singing the title song. It is so out of place with the rest of the music it was a little startling. Maybe it would have fit if there had been some more Caribbean themed music in the movie.

For a summer evening in 1977, Dolores and I enjoyed this film at the Santa Anita Cinema. They were small theaters so when a moderately popular film played, the house was usually pretty full. The images of the film are what is memorable about it, the story is mostly boiler plate adventure stuff. It was well produced and competently directed, and best of all for the investors, it was sold properly. A couple of years later, Benchley's book "The Island" was made into another summer film, this one starring Michael Caine. He should apparently stay away from the ocean because,"The Island" ended Benchley's winning streak and Jaws the Revenge could have ended his. Better to remember the two summer films from Benchley that worked, including this effective but not classic thriller.
Posted by Richard Kirkham at 4:53 PM

Hey Richard. I came across the blog when Amanda posted on her facebook and I'm loving it. Reading through the posts, I came across this one and it rang particularly loudly for me. Not because of what you wrote (I've never actually seen the film) but because of an uncredited writer that helped Yates rewrite the script: Tom Mankiewicz.

The reason I bring Tom up is because he recently passed away this last Saturday. He was also a lecturer for us graduate students at Chapman University's Dodge College of Film and Media Arts. I mean not to detract from your post but to only bring attention to a man that was extremely pivotal in the Hollywood industry. I'm not going to clog up the comments box with his very long list of accomplishments, so, instead, I'll leave you and your readers with his obituary from today's LA Times: http://www.latimes.com/news/obituaries/la-me-tom-mankiewicz-20100803,0,4649792,full.story

I had no idea this was the origin of the wet tee shirt contest. Fascinating.

It may not have been invented by the movie but it sure was popularized by it.