There is only one thing this entry and yesterdays have in common. As with New York, New York the Muppet Movie has a truly terrific song that failed to win an Academy award. If anyone can whistle the tune from Norma Rae that won this year, I'll fall over on my butt. The Rainbow Connection inspired artists, film-makers and musicians around the globe, and the song was actually performed by the star in the movie. As with many things in the Universe, this phenomena cannot be explained. The song is perfect as is the film it comes from. This lighthearted concoction of music, comedy and stars is just what a family audience should want. I love Pixar Movies but there needs to be a new Muppet film now. These characters are too lovable to lay dormant for a dozen years on our movie screens. 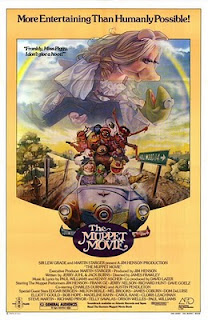 In the summer of 1979, I floated in the pool, Dee worked her first job out of college at the Bank of America, and we spent our leisure time going to Hollywood to see movies. At the point the Muppet Movie had opened, we had already been downtown to see Alien a couple of times. Later we would be seeing The Life of Brian and Apocalypse Now. Thankfully, one summer night, probably a weekend evening, we enjoyed the bliss that is the first feature film from our hero Jim Henson and his pals. We saw this movie at the Cinerama Dome with my friend Don Hayes. The show was so packed that we had to sit in the third row and all of us got cricks in our necks from looking up at the giant screen just a few feet away from us. Don was my best friend in the Seventh and Eighth grades. We had moved to Alhambra and I was going to a new school. I think Don took pity on me, (I was a year younger than everyone else) but decided I was alright when I talked back to another kid who had been picking on me. (I did that talking with my steel lunchbox against the kids head). Don had gotten married to his high school sweetheart Cheryl the year before but it was not working out. I don't remember if they were separated when we went to the movie, but I do know that she did not go with us.

Kermit the frog was actually a television star at this point. He and his cohorts had been ruling the airwaves with a syndicated TV show that was chaotic and hysterical. If you parents out there have not shared the Muppet show with your kids, shame on you. All of the characters from the show are in the movie in one way or another. The film purports to tell the backstory of the Muppets rise to fame. It is really a road picture, with a chase thrown in to add some drive to the narrative. Along the way, Kermit picks up a best friend, a girlfriend, and a cast of goofballs that should delight anyone. They run into a couple of dozen Hollywood big-shots who show up for a scene or two or sometimes just a single line. Orson Wells gets more out of his one sentence than he did in the last three movies he directed. What a joy it was to watch an old hand like Bob Hope trade quips with Fozzy Bear, like they were an old vaudeville act. The film marks the final appearance of Edgar Bergen and Charlie McCarthy, a ventriloquist act that found fame of all places on the radio in the 1930s. My Dad had a antique spoon that had Charlie McCarthy's likeness on the end. It went with all the other radio premiums that we had to sell when he needed care in his last years. 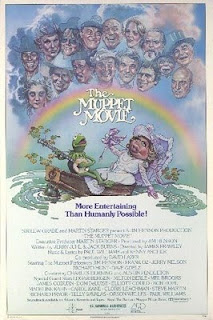 Paul Williams wrote the wonderful songs in the film, along with Kenny Ascher. Rainbow Connection is the star among the songs but I love "The Magic Store", which finishes off the film with a piece of heartwarming legerdemain. "Moving Right Along" is a highway song that I know we must have burst into on our trip around the country back in 1999. This is the second movie on the list to feature a cameo by Steve Martin, but unlike Sgt Pepper, he doesn't get to sing, he only gets to be hilarious. There is nothing that would improve this movie. So along with Alien, the summer of 1979 had two perfect films.

Dolores and I have quoted lines from this movie to each other our entire marriage. "Myth,myth!" "Yeth". "I'm lost", "maybe you should try Hare Krishna". "No Problem". Next to Star Wars and Star Trek, the Muppets are our greatest cultural touchstones. The songs from this movie resonated in my head for years. I hadn't seen the whole film for at least a decade, but as it was playing tonight, it was easy to sing along with. We have loved all the motion pictures featuring the Muppets, even Muppets in Space, which was not a great effort and their last major film. There is supposed to be a new Muppet Movie at Christmas 2011, please let it show up. Re-watching the first of these classic puppet movies featuring characters that are more real to me than many live movie stars are, I must agree with Rolfe the Dog when he sings the refrain, "You can't live with em, you can't live without em, there's something irresistible-ish about em."
Posted by Richard Kirkham at 10:28 PM

I mean, clearly it was awful, but how can you ignore the star power of Tim Curry or forget the catchiness of "I've got cabin fever"?

Muppet Treasure Island preceded this film, and it was not awful, it was delightful. I am laughing right now at he memory of Cabin Fever.