It appears that this movie is almost universally reviled, but the only I reason can see for that is that the Beatles music was somehow bastardized for the film. Nothing could be further from the truth, the music was very carefully performed and arranged for the talent that was available in the movie. Maybe there are participants that hang their head in shame over this, but they should not. This is a pop confection for a summer audience with a light sheen of camp and a heavy dose of 1970s sensibilities. It will not be everybody's cup of tea, but anyone who claims that this is the worst movie of all time, or even that it is especially bad, is simply taking a position. As I watched it again this morning, I was charmed by the vocal performances of the actresses that I never heard from again, and the star power of the Bee Gees.

Peter Frampton is the nominal lead, but it really is an ensemble piece. Frampton is fine but not particularly special. His vocals have some of the phrasing that were found in the big successes he had in the seventies, but he has very little on screen charm. He is getting by on his teenybopper good looks and a big smile. Other than that, he is pretty wooden. The one thing he should be embarrassed about is the first costume he appears in. He is wearing a pink checkered shirt with a brilliant white pair of overalls. I am sorry if this sounds politically incorrect, but he looks like a gay scarecrow in a Broadway revival of the Wiz. In fact this movie has much in common with the movie version of the Wiz, both are star vehicles for singers, who are not necessarily actors, both feature a strong 70's sense of style in palate of color and design, and both are less successful then was expected. The difference is the songs in Sgt. Pepper are by the Beatles and they were covered well, so the music is memorable. The Wiz has "Ease on Down the Road" which only has Michael Jackson going for it. There is one concert scene in Sgt. Pepper, where they recreate the look of Frampton's monster selling live album. Complete with pink back lighting and head movement, it is an attempt to remind the young girls of the time why they came to see the movie.

The story is more coherent than Mama Mia, which has become a big success despite having a ridiculous premise and even less reason for the songs to be in the order they appear. Sgt Pepper was based on a stage production that I never heard of or saw, but the story and songs fit it better than many Broadway shows I've heard about or seen. The word "cheesy" comes to mind for a lot of reasons, the film when it is shot outside, never escapes the back-lot feel of a TV movie. The costumes are cheesy simply because the fashions of 1977/78 were in fact cheesy. This movie is an accurate time capsule of the way stylish people dressed then. The neon colors from the interiors and night scenes are gaudy,just like the Sunset Strip was in 1978. I have a picture of the strip that I took in the summer this movie came out, with a giant billboard promoting the Kiss Solo albums, and those album covers featured the same sort of glowing neon back-lighting that you get in many sections of this film. Sure the movie comes across as a commercial endeavor to sell music, and cash in on the heat of the artists in the movie. I don't quite know why that makes it a bad film, simply because it is a good commercial. 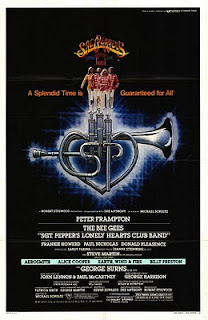 If anyone wants to dump on the musical performances, I will point to three songs that were pop hits from the movie and show the quality of the work. Aerosmith does a sleazy version of Come Together, that used Steven Tyler's voice very effectively. I will admit that as actors the band did not do much, but Tyler, a beanpole of a singer is supposed to have a death struggle with Frampton, who is equally slight. It wasn't really supposed to be convincing. Earth, Wind and Fire are spared any acting scenes, they simply do a musical number at a benefit. Got to Get You Into My Life, is a funky seventies version of the Beatles tune, that really is adapted well to the talents of the group. The Bee Gees harmonies on all the songs they appear on are spot on. Each gets a chance to be featured on a song or two; but the standout is Robin Gibb's smoking version of "Oh Darling". There is minimal musical accompaniment during the whole recorded version, but in the film, he ends up singing nearly half the song a cappella. If you don't like this, you don't like music.

Dolores and I saw this opening day in July 1978, at the United Artist Theater in Westwood. We were expecting big crowds for the first show at noon, so we got there early and were the first in line. A line that ended up being about 20 people long. The theater was about half full by the time the show ran, and when we walked out and saw an even smaller line for the next show, it dawned on us that this was not going to be the next Star Wars cultural phenomena. We did have a couple copies of the soundtrack, and it was a pretty big success also, but they overprinted and it was in cutout bins for the next four years whenever we went into a record store. Dee and I were huge Bee Gees fans and enjoyed the movie a lot. This movie is a good time capsule for the late 70's, you get shots of the L.A. area on Sunset that most of us had spent time hanging around, you get the sounds and colors of the era. You also get to see the fashion of the times, but I can assure you I never owned a pair of overalls in my life.
Posted by Richard Kirkham at 12:03 PM