A few years ago, a post on a movie site I frequented asked the debate question, "Is 'Die Hard' A Christmas Movie"?  Why such a question was necessary is hard for me to fathom, of course it is! The author had made a concerted effort to analyze the  film using quantitative measures. I thought his results proved the opposite of his conclusion that the movie was not a Christmas film. Regardless of any of that data, the reasons that "Die Hard " qualifies as a Christmas film are the same ones that qualify "It's a Wonderful Life" and every version of "A Christmas Carol" as Christmas films. What follows is a edited view of my response to that post. 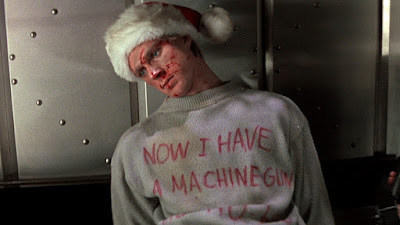 The true reason that Die Hard is a Christmas film is the theme of the characters. The main characters have the same thread of redemption in them that “A Christmas Carol” has. The setting of the story at Christmas encourages the deep questioning of our selves much like the Christmas spirit encourages us all to ask why we are not as charitable and kind all the year long. The Christmas season provokes a contemplative thought process that might otherwise be dismissed during the rest of the year.
We have three characters that represent redemption, the kind that is life affirming and important especially during the holiday season. While redemption is certainly a theme in other films, it is the Christmas season that provokes the redemption of our characters here. Primary among these characters is our lead, John McClane himself. He is using the holiday as a justification to reach out to his wife by traveling all the way across the country to see his family in L.A.. The coke sniffing by Ellis and the casual workplace sex going on in the offices are a reminder that people in the work place take advantage of others during the holiday season. For many at that party it will be the only holiday spirit that they get. You know Ellis is not going home to cookies and carols with his family after the party. It is clear he’d like to be going home with some Holly wrapped around his tree. John sees this and gets angry, which drives a wedge between he and his wife just when his very actions of coming out to the coast started to bridge their gaps. Later, he does the best he can to save Ellis from himself, despite having plenty of motivation to be happy that he will be out of the picture. That is one of many redemptive acts. He gives Hans a chance on the roof, even though he doesn’t give him a loaded gun. Patience with a stranger is another act of redemption. His devotion to his wife is incredibly strong despite their estrangement, this is another. He consoles a fellow police officer that he has never seen, and takes him to his heart because Powell needs the support just as much as he needs Powell’s. That is an act of mutual redemption. All of this takes place during the Christmas season but more than that is influenced by the spirit of the season. No such redemption is being offered in the first sequel which is also set at Christmas, but for which you will not find many if any adherents of the premise that it is a Christmas movie. 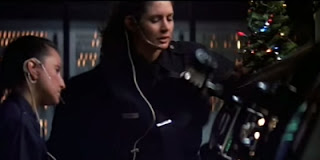 Powell and Holly are the other characters who seek redemption and gain it because of the Holiday. Powell, gets involved in the whole set up because he was willing to work Christmas Eve. A sacrifice in part that is certainly brought on by his guilt over being a “desk jockey”. His reason for being behind a desk most of the time is tragic, the kind of tragedy that Christmas story themes are designed to help us confront. (It’s a Wonderful Life, A Christmas Carol, One Magic Christmas as illustrations). His holiday redemption is completed with his restoration to real cop by helping McClane in the tower, and rescuing them with the same act that had condemned him in the first place. Holly has let her home life suffer for her vanity at work and her pride in disagreeing with her husband. She stands up to Hans, that is an act of courage, she is given hope by the frustration of the terrorist/criminals, that is a restoration of her faith. Finally, she reclaims her married name at the end when she is being introduced to Powell, that is the sign of redemption in her marriage, much like Jimmy Stewart crying “Merry Christmas” after seeing what life would be like if he had never been born.
Hans and Thornburg are the Marley and Potter equivalents in this story. Each is selfish and indifferent to the suffering of others. Each is given opportunities to act in a manner that is consistent with the spirit of the holiday, and each rejects those chances. As a result, they each get a comeuppance that is commensurate with their acts. Hans gets shot and dropped off a building, and Thornburg is publicly humiliated. The spirit of Christmas in the form of a naughty or nice list is kept by the outcome of the story.
We are all on the nice list because this movie was left in our Christmas stocking for us. I know that we would not be discussing it here and now, if the Christmas theme were not an essential part of the plot. The very fact that we are having this discussion at Christmas time, 24 years after the movie came out is also proof of it’s lineage as a Christmas film.
You may still disagree if you like, but to do so may put you on Santa’s naughty list. Merry Christmas.

Posted by Richard Kirkham at 8:55 AM