Ok, we started this morning with The Kentucky Fried Movie from 1977. This feels like a movie that I would have seen with my friend Art, but I think he was in Korea at the time so it was probably something that Dee and I saw together. She looked out of the corner of her eye this morning as I watched, and she read. She said that she didn't remember this movie as being this crude, but that is all I remembered about it. One of the reasons I thought I saw this with Art is that we both used to make fun of other movies or people by pointing out that they reminded us of one of the fake trailers in this movie "Catholic High School Girls in Trouble". Mary Ann I'm not sure I would recommend this to you or anyone in the family (except Rick). This film is definitely nasty but also very funny. It is the first film from the Abrams, Zucker and Zucker team that later created Airplaine and the Naked Gun Movies.

There is no story, it is just random vignettes designed to provoke laughter. The longest segment is a parody of Enter the Dragon, that runs about 20 minutes. If you have seen the Bruce Lee film, you will find this hysterical, if not, it will only confuse you but you will still laugh. There is a segment filmed at the Rialto theater in South Pasadena, and I know I sat in the seat that the protagonist was in when I saw "The English Patient". Also, the summer of 1977 contained a lot of Rocky Horror Picture Show screenings at midnight, so the theater looked exactly the same in Kentucky Fried Movie as it did when we saw Rocky Horror (just less rice and toast).

John Landis was the director for this film and there were many trademark references in the movie. I probably should not admit that some of the segments reminded me of stupid jokes that I still make. I cracked up at the line "He's leading the witness!" The visual just takes the point and treats it literally. This movie was like "Saturday Night Live" only it was done without the restrictions imposed by a TV network. Nudity, language, racism, commercial parodies, and the time period make the film very evocative of the era.

There were a series of movies done in this style over the years, including "Tunnelvision", "The Groove Tube" and "Amazon Women on the Moon". You don't see this anymore and that is probably because cable programming took over this genre of entertainment. I got a good vibe from most of the movie, sometimes the timing is off or the commercials that are being made fun of will be obscure for a modern audience. I thought some of the sex jokes were a little over the top, while others were sexy and a little close to home, "Turn on the News." Don't think about whether any of it make sense, just look at it as a time capsule from a very weird time in America.
Posted by Richard Kirkham at 3:39 PM No comments:

A Movie A Day Summer Project 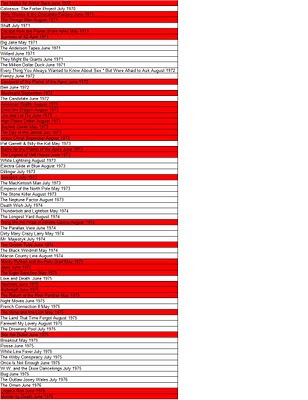 I am a little frustrated that the summer school session at Fullerton starts in late June, the same week Dolores gets done with school. I basically have three weeks to myself and can't do much except around the house, Not that I would do much anyway, but having to do it alone is annoying, I've decided on an ambitious writing media project. Since it is summer time and I have a huge nostalgia for the years I grew up in movie theaters, I decided I would launch this Summer blog. I'm going to try to watch one movie a day from the summers of the 1970's. Some of those films my family took me to, but the real reason that I loved this time was that I made most of the choice, I saw films with my friends, girlfriend and by myself. Many of the movies were terrible, (ORCA) but they evoke a mood, time or place. Memory is something that I expect I will someday long for and I better help myself a bit along the way. I went thru the IMBD and pulled films that opened between May and August in the years 10970 -1979. My memory was already a little fuzzy because there were a number of movies that I thought were summer films that actually opened in March or April., To be honest, I may have seen them in the summer since in those days a film could stay in theaters for several months, instead of having to be off the screen in two weeks to get ready for the video release. I picked films that I actually saw with maybe two or three exceptions. The films I did not see were movies that slipped by, but could easily have filled a summer night for me because of my interest in the juvenile, political or sentimental. My kids will tell you I am a soft-hearted marshmallow but I also had a cynical streak. To the best of my ability I will try to recall the circumstances, personalities and reactions I had to these movies. Most of these comments will not be full blown reviews but rather quick insights into a time and personality. I see that this seems very narcissistic, so if you are not interested, don't read, but I hope you might find some of the memories insightful or that they stimulate you to remember trivia that you are glad is a part of your own life. I have no particular strategy for the order in which I will watch the films. They could be from 1971 one day and 1978 the next. To the Left you will find a list of the films I will try to get to. I started out having access to some format of the film in 42 of the 135 movies listed. I have started acquiring more along the way and that will be part of the story as well. If you come across this and have a suggestion or want me to do a particular film, let me know. I will say however that July 4 is reserved for JAWS. It has been a long tradition at the house and I intend to keep it.