(The Above is a Clip From the Movie, Not the Trailer)

This is an example of a film that you don't see much anymore. A small comedy featuring a straight story, based on a play. Today it would be turned into a musical, an animated film, or it would be "re-invented" for a different actor or time. This movie succeeds on three things really; the two lead actors, the whimsical story and a beautiful score. In the 1970s, Neil Simon plays were turned into movies like this on a regular basis; "Plaza Suite", "Same Time Next Year", "The Prisoner of Second Avenue". These were basically two person plays expanded into a movie format. "They Might Be Giants" would have been great to see on stage but I'm sure I would have missed the sequence near the end set in a grocery store. I suspect it was added to make this more of a movie. Those kinds of additions don't always work but in this movie it helped sustain the fantasy really well.

I have looked for this movie for several years. It was once available on VHS and DVD but those copies must have been rare. A used copy was being offered for $60 on Amazon. Even a VHS copy was selling for $40, and I could not give away VHS tapes at our yard sale a month ago. I secured my copy for the blog project by trolling the satellite channels we have coming into our TV. A number of movies have been obtained that way for me to talk about this summer. I will try to post a video cast for you, so you can hear a little bit more about this. Back to our current movie. 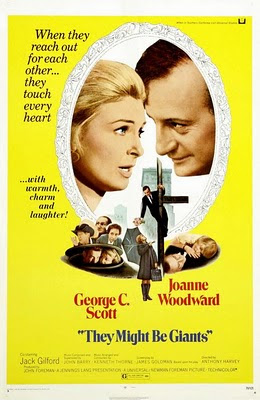 They Might Be Giants Features George C. Scott in his first theatrical film after winning and turning down the Academy Award for Patton. If you were to see these two movies back to back, you would understand how much he deserved the award. The two characters are very different in temperament and tone. There are a few grandiose moments in each movie, where the characters are acting out fantasy, but it is clear that although he is charming, Mr. Holmes in this movie is nuts. The story involves a respected Judge going off the deep end after the death of his wife. He loses all real connection to his past life and has assumed the persona of Sherlock Holmes. It would appear that he is doing this as a way of continuing his quest for a better world and for justice, but in a guise that avoids the reality of his loss. His brother is being blackmailed and wants him committed so that he can gain control of a sizable estate. There are some fun scenes where he performs deduction in the same manner as the fictional character. The psychiatrist that has been asked to examine him for the commitment process, is a woman (JoAnne Woodward) who happens to be Dr. Watson. In trying to help him she becomes caught up in his fantasy.

There are a ton of people in this movie that were in the early part of their careers. Rue McClanahan, who died just a few months ago plays his sister-in-law, Oliver Clark who played Mr. Hurd on the old Bob Newhart show is another patient. M.Emmet Walsh is a garbage man, Jack Gilford, nominated for best supporting actor two years later in Save the Tiger, is best remembered as the sad faced man from the Cracker Jack Commercials of the Time, here he is Holmes one true friend and it is revealed, an equally big romantic. I recognized James Tolkan as the blackmailer, from the Back to the Future movies, and future Academy Award winner from Amadeus, F.Murray Abraham plays an usher at a movie theater. The characters in the film are all lost in some way or another, and the shared fantasy of fighting Moriarty and pursuing justice brings them together and sustains them for at least a period of time. The movie has a strange but lovely story of romance between Holmes and Watson. The two stars play it straight and it feels real even though it is fantastic.

I have included for you at the bottom of this post, a video that features the main theme from the movie. It gives a very accurate reading of what the feel of the movie is. Warm with a bit of adventure and romance. I said before that the music was one of the strengths of the film, there is an invigorating march that accompanies the walk to the final confrontation with evil (Reality), and as Holmes and Watson are joined by various lost souls they have encountered throughout the story, the music builds. Their small army is ready to take on Giants if that is what they turn out to be. I saw this film at the Gold Cinema that I have mentioned before, but I remember it best from a TV screening I saw in the late 70s. Watching it today, I had only a vague recall of images and concepts. I was quite pleased to be able see it again as if I was seeing it for the first time. If any of you who know me are interested in seeing it, let me know, I can save you sixty bucks, because I'll bet you won't find this at Blockbuster.

Posted by Richard Kirkham at 5:34 PM