Let's do a checklist to start with.

For the record, my wife loved the movie and does not have any of the reservations that I have except for one. I'll tell you what that is at the end of this post, but for most of the film I had a great time and enjoyed the songs, staging and look of the movie. It does lack something and I'm having a hard time articulating it but I will try. Some musicals can expand and fill a screen with color and dance and energy as a way of opening up the stage bound version of the play. An intimate story like this suffers a little from being so close on the characters and by keeping the structure of having each of the "Seasons" narrate different parts of the story, Eastwood and the screenwriters (who also did the book of the musical) remind us that this is a theatrical piece more than a film. The energy of a movie is different and the transitions and storytelling work in completely different ways than in a stage musical. The reverse is true as well, "Beauty and the Beast" as a film flowed like a stream over a perfect hillside and into our hearts. The stage version feels like it is a wave engulfing us in it's musical tropes. It is a different experience and for me not as satisfying.

"Jersey Boys" the movie tells the same story of the rise of a group of New Jersey delinquents to pop stardom and the tribulations they go through. The songs are worked into the story as part of the backstage process but the songs don't tell the story as in a traditional musical, they just highlight moments from the story. It worked on stage pretty well because it is done in a minimalist style. The mind's eye fills in the blank spaces and connects the dots. In a film, all of that is done for you and the songs stand out as non organic parts of the film. They are not what the story is about. This is not a hodgepodge "Frankenstein" creation like "Rock of Ages" or "Mama Mia", which strech songs that already exist to fit them into a story. These songs are distinct and could be performed at any point in the story. They only advance the story by their success or style, not by their subject.(The one exception being "Oh What a Night", which is tied into an event early in their careers but the song came later in the history of the band).

The integration of the songs into the film is smooth and the staging in several scenes is excellent. The first performance of "Sherry" was choreographed in the style of pop groups at the time and looked terrific. The Ed Sullivan performance was also a standout scene, it was another one that advanced the story but the song mattered not. The staged version in a nightclub of the debut of "Can't Take My Eyes off of You" was also special. When the big band horn section comes in with a curtain revel, it sends chills through the audience on screen and in the theater. The end credits seemed to have the things that a musical needs, choreography from the whole cast, a willingness to suspend disbelief and everyone sings. If the whole movie had been like that, it would have been different enough from the play that it would stand out. It feels like they played it pretty safe by sticking closely to the style of the play and that';s where I think my reservations are for the most part.

The great Christopher Walken appears as a mob connected guardian angel, but that old song and dance guy does not get to do much until the credit sequence. I assume the guys in the lead roles are the actors from the Broadway version of the play because I did not recognize any of them and they are all talented singers and performers. Their acting styles seem to emphasize stage theatrics more than film acting. The reunion at the Rock and Roll Hall of Fame Induction is a good example of what I mean. They let staging, costuming and body language do the acting. The makeup conveys the passage of time rather than their facial expressions. That reservation that I mentioned that my wife shared with me has to do with the make-up. I did not see Clint's much derided film on J.Edgar Hoover, but the biggest criticism I remember reading was of the make-up job on Leo. I guess Clint is not very focused on this aspect of the film because the make-up work here was not very convincing. Even though it is not supposed to last long since we flashback almost immediately to the younger versions of the actors, I think the depiction of them as older needs to be convincing, and it was not. 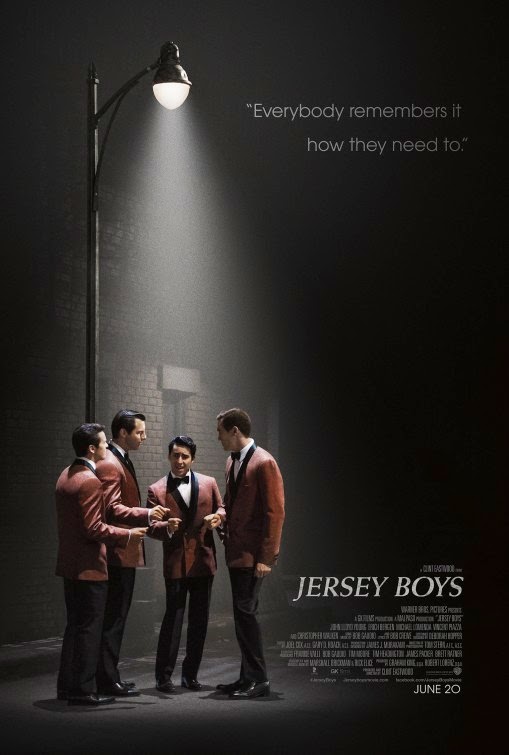 All in all I liked the movie but I can't enthusiastically say I loved it. There are moments that impressed me but there were several times when the picture was just not working the way a film should. I applaud Clint for trying his hand at a musical. He doesn't embarrass himself, but I suspect that the remake of "A Star is Born" that he has been connected to will probably need more than Beyonce to get made.
Posted by Richard Kirkham at 8:59 PM

I'm definitely with you on this. I enjoyed the movie, not having witnessed the stage play. Can't say I loved it, but really don't understand the criticism leveled against it. And yes, you wouldn't go to see this for the make-up employed. I did see the J. Edgar film and the make-up is a real issue. But, the film won me over on story. Not greatly, mind you. Still, Leo and Armie Hammer did terrific performances. Fine look at this, Richard.

Fine review. For some odd reason I never could muster the desire to see this in the theaters. It looked interesting but not to the point of making the trip.

Hey guys, thanks for the comments. I liked the film enough to recommend if you answer yes to 3 out of four of the opening questions. It is safe to save up for later viewing Keith so cable, PPV, or Blu will do. I was floored by the stage version, but only satisfied with this.

Very thorough review! You do bring up some points that I agree with. One of them is the staging of the film. Everything looked and felt like the time period which this story takes place in. Because of this, the film's world was very immersive, like the audience was able to be a part of that environment. I've never seen the stage version of Jersey Boys. But, based on the movie, I can definitely see how this story could work as a Broadway show.