Every few years a movie comes along that focuses on food and makes you want to eat, now. I remember seeing "Like Water for Chocolate" and hoping I could find a Mexican place that cooked food like that. When I saw "Eat, Drink, Man, Woman" I wanted to consume foods that I had never heard of before. "Big Night" romances Italian food so much that it might be better to eat than to fall in love. Hell, even food made by a rat was appealing a few years ago. This movie sits in that tradition. Nearly every scene will have your mouth watering in hopes that this restaurant, or food truck, or just that guy, would appear on the scene and you'd be able to enjoy a meal that reminds everyone why people watch the Food Network in the first place.

Along with the great looking food, there is a nice story here about living your passion. Chef Carl has a history of promise but a present of so what? When an opportunity to impress a food critic goes wrong, he must figure out how to restore his status as a Chef and balance his personal life, especially with the son he has neglected since divorcing the kid's Mom. This story will not surprise you. It goes exactly where you think it is going to end up. It does take that journey in an entirely charming and entertaining path, so even though you know the destination, the journey is still worth your time.

Jon Favreau has cast himself in the movie that he wrote and directed. It is a nice return to the indie roots that he has not haunted much since directing some pretty big films in the last few years. For my money, he is a great storyteller and makes a picture worthwhile without special effects and big budgets. He is however helped by some star power. Dustin Hoffman shows up for a couple of scenes to create a motivation to get out of the rut the chef has been stuck in. Scarlett Johansson buts in a little time as a minor character that gets as stimulated as we do by the process of creating great food. Robert Downey Jr. appears in one scene, steals focus for the whole sequence and than leaves us with a sense that the world is a weird place. The standouts however are not the big names but the more modestly familiar. Sophia Vergara is the most wonderful ex-spouse a person could have. If there is a flaw in the script, it is that we have no idea why the two exes are no longer together. They understand one another better than anyone else in the story. John Leguizamo and Bobby Cannavale are terrific background characters. In the second half of the movie Leguizamo steps out a bit more and the movie is better for it. Emjay Anthony is a young kid playing a young kid. He has a pretty good part and shows a nice amount of promise. Finally, Oliver Platt is in the movie, and he is wonderful in the role of a food critic that pushes the story forward.

Several other elements about the story make it a little more unique. There is a solid little critique of social media culture contained in many segments of the movie. There is also a very good demonstration of the power that culture can have for the benefit of people as well. That benefit is not just limited to the economic process of connecting with customers, but also finding ways to connect with human beings. I appreciated that it was not a complete satire on the on-line world. It should be a good reminder to everyone that what you spill onto the net, is going to stay there and all of us should be cautious with that responsibility. 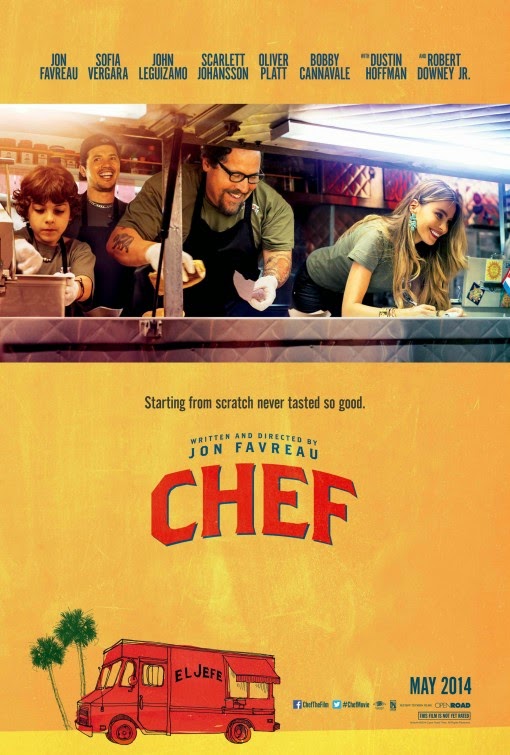 "Chef" is great counter-programming for the summer. In a season filled with sequels that are not as great as we might want, and original blockbusters that are loud and somewhat crude, it is great to have these smaller films that get by on wit and charm to make the summer days more passable. This movie will be a crowd pleaser, but the crowds will be moderately sized. I've been trying to get to it since it opened at the end of may, so for many of you I am late to the party. I feel satisfied by that because this was a good mid-summer bracer and leaves me hopeful that other films will come along and charm me for the rest of the year as well.


Posted by Richard Kirkham at 3:36 PM

The cast sounds like a side dish made for you, and no Damn fruit in the dessert.

A very enjoyable distraction from the usual summer fare. One which made me pretty damn hungry, too. Fine look at this, Richard.

Thanks Michael, I remember that you recommended the film and I looked forward to it. The complications I went through to see this could be a short film of their own. Let's just say technology is not perfect, on-line or in a theater.