If you are leaning right, you will embrace this film and feel encouraged that someone is articulating views similar to your own. If you lean left, you will understand the views of those who see the world differently than you do, and if you don't care about politics and history, you should go see "Transformers" and wait for this to show up on your cable channels later on. This is a movie that takes some motivation to see because it is not always as polished and cinematic as the commercial films playing in the next theater, and it has a pretty clear agenda, so you know going in that you will be listening to an argument. I will try to focus on the cinematic and story telling elements but inevitably, the argumentative issues will become a part of this post. I write about films here because I want to talk about movies, but when the movie involves politics, I hope people will listen with an open mind, regardless of their political persuasion.

Dinesh D'Souza is a controversial conservative author, who has turned to making documentary films in the last few years. Two years ago, his film "2016 Obama's America" was a surprise box office hit.  He took his political theory as to the President's agenda, and presented an argument that was easy to follow with a variety of proof that was sometimes convincing and sometimes stretched credulity. In the midst of an election year, it was exciting to see a movie in theaters that came to grips with a political point of view directly. This year is another national election year, but it is not a Presidential election year. Toward the end of the film, you would not know that because D'Souza targets not only the current President but also the most obvious national figure that he sees as a dangerous successor to the President.

Before the film starts making political points however, it has a much broader and I think more acceptable agenda. "America" presents a full-throated defense of American values in contrast to a simmering narrative of the nation that has been percolating for nearly fifty years. Nothing in the film attempts to whitewash the sins of the past, but it does put many of those sins into context and some of them are directly challenged for accuracy. He begins laying out an indictment of America as presented by left leaning and socialist based scholars and activists. While he as the film maker does have control of the editing of the interview sequences, I don't think any of the subjects would deny that he has presented their criticisms accurately. The late Howard Zinn is not interviewed directly but his thoughts are paraphrased for the audience, and again, it seems that no one could object to the interpretation that D'Souza has made of his perspective. Having set out five specific indictments of the American system, D'Souza proceeds to answer each of them with well selected examples, interviews of other relevant public figures and scholars, and some statistical data in the right places. With the exception of Zinn, the approach is largely clinical without a direct attacks on the advocates or the interview subjects from earlier. Zinn on the other hand comes in for some direct criticism from a noted historian who openly mocks some of the "truths" that Zinn has supposedly exposed. The tone is still even handed despite the other professor's clear disdain for Zinn and his history.

There are some sincere but amateurish theatrical recreations of historical moments to make the points that D'Souza is trying to get across. These add an element that makes the film feel more like a History Channel program than a theatrical feature but they also sell some of the ideas effectively. The one major exception is hinted at in the trailer above. Although the ad asks us to imagine a world without America, and an early hypothetical event shows how this could have happened, it is really not the focus of the film. Occasionally we get to a point where a rhetorical question is posed, but there are no recreations or long sequences that attempt to answer those questions. For two thirds of the movie, the focus is on why the historical views that are promulgated currently are either inaccurate or without context. The most effective parts of the arguments are the counter stories and opinions that are shared. There is a long piece of footage from a press interview with Bono of the band U2, that expresses the feelings that D'Souza and many other Americans have about this country. When the question of American Exceptionalism comes up, this should be one of the first quotes used by defenders of the concept that there is something different about the American character.

The last third of the film returns to more overtly political issues and attempts to link the philosophy that "blames" America to those political figures that the film makers clearly are opposed to. This will be the section of the movie that is most infuriating to partisans on the left, because it  is not subtle about how President Obama and Hillary Clinton are viewed through this political prism. Whether you are convinced or not, it is a plainly stated case and the proof offered by D'Souza is interesting. Challenges to his reasoning are likely to emerge, on the assumption that heads have not exploded at this point and we are not already reduced to name calling. It takes a great deal of fortitude to listen to positions that you vehemently disagree with. You can't respond logically to an argument though if you don't understand it's premises. "America" makes clear what the perspective of many on the conservative side of the national divide is. The campaign law that D'Souza admits he broke in the recent court case is also used as an argument to demonstrate the dangers that the right perceive from the power being accumulated in government hands. While he might not be the poster child that civil libertarians would want to champion, there were plenty of other examples that should disturb anyone, regardless of their political ideology. 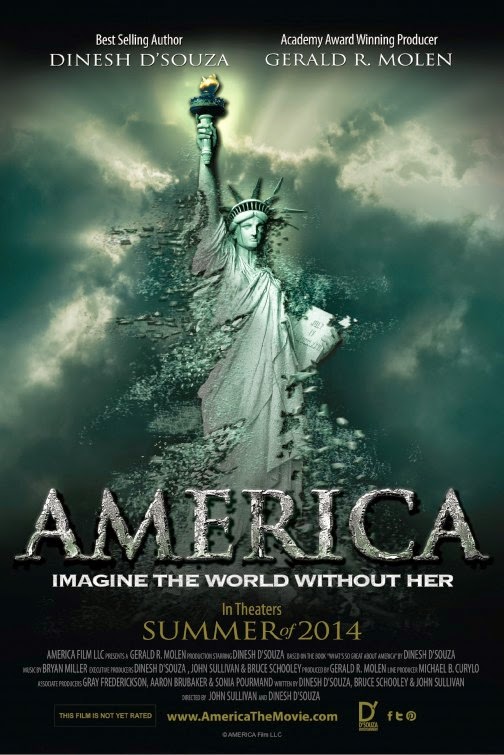 I have not read other criticisms of the film yet, as is my custom, I try to see things for myself first. It is not hard however to imagine some of the vitriol this movie will earn from those who disagree with the positions of the film makers. This is a hundred minute film that attempts to cover a broad range of topics at a thematic level rather than a microscopic one. As a result of the broader approach it indulges in some pretty clear appeals to patriotism. Someone is going to jump on this as political propaganda but that misses the point. Propaganda seeks to obscure the truth with imagery or slogans, this uses imagery to make the analysis entertaining and compelling to it's intended audience. That imagery is not merely a token from the clip art book of patriotic pictures. The figures represented have principles that align with the argument. The contrast in narratives is told visually in a film and so some of this is just necessary. I do not remember anyone being shown in a negative light through manipulation of the images. Certainly the editing of some messages may create a negative impression, but the quotes from the President and Senator Warren were not taken out of context. They were explained and used to contrast the  positions of the  two views, not to diminish the advocates. Oliver Stone spent ten episodes extolling the history of Howard Zinn. This film is not as complete, but certainly deserves as much attention as that other enterprise did. It is enlightening to look though more than one view of history.

Very interesting review. I'm interesting to see this. The reviews have been predictable which makes it hard to really judge whether this is a good film. You encouraged me to give it a shot.

I thought it was interesting, but I know that there is a lot of baggage on both sides.