This is a sad, sick, twisted story. The morality level of the people it depicts is zero, the light it sheds on the news gathering business is harsh and it makes the City of Angels look like a pretty awful place to be. All that aside, the movie is brilliant at building tension, compelling us to watch those things that are not pleasant, and it contains an amazing performance from it's lead, Jake Gyllenhaal. Along with "Whiplash", we may have a candidate for the worst creature pretending to be a human being in a movie this year.

Louis Bloom is an intense young man. He appears to be maladjusted and if you looked at him closely, he might be a high functioning sufferer of Asperger syndrome. He is socially awkward with a very distinct manner of speaking. He is also lightning quick at learning things and he is smart enough to know where to find the information he needs or the pressure points to push to get what he wants. He also has no scruples whatever. He steals as is necessary, he lies when it serves his purpose and he has become a manipulator of the first order. It is not a life of crime that he excels at however. He dreams big and with the shortcuts he is willing to take, in his new avocation, he might very well be the next media king.

Gyllenhaal has the mannerisms and quirks of this character nailed. It is a very different performance from him than we have expected over the last few years. He is usually the quiet brooding type. I have not yet seen "End of Watch", but his performance in "Prisoners", "Zodiac" and "Brokeback Mountain" are very different from what he does here. He looks like he is maniacal at times. His eyes are wide, there is a slight sheen to his skin, his hair appears to be slightly greasy. Louis also dresses like a guy who wants to fit in, not like one who actually does. The thing that most distinguishes the performance though is the control he manages over his voice. The cadence of deliver suggests a degree of energy that he is suppressing at all times.  His language is calculated and measured. The script by Dan Gilroy, sounds like it was written by someone who has absorbed the lesson that Quentin Tarantino has been sharing for twenty plus years, talk can be fascinating. This is not the verbal poetry of a Tarantino character per se. Louis barely utters a pejorative or curse word in the story. Yet you know his mind well from the way he phrases his negotiations with various characters. There is a degree of earnestness that comes out very clearly. Not the friendly form of sincerity, but the deadly serious determination that goes with his madness.

The story involves Louis climb into the local news business as a provider of video images to a local channel. He falls into the business but he quickly learns the ropes and reads the trades and researches on line. He has a devastating piece of dialogue that summarizes how local news processes all of the material they present on a daily basis. His calculation of the amount of time devoted to local crime stories is enough to make you want to scream any time a news program comes on, because he is balls on accurate.  Any of you reading this from somewhere other than L.A. might be surprised to learn that Kent Schocknek, Pat Harvey, Rick Chambers, Rick Garcia and Sharon Tay, are all real local news personalities. They are not acting, they are simply playing themselves in the movie. It floors me that they would agree to appear in a film so clearly condemning the business they are in. Bill Paxton is a cutthroat competitor in the same business and he ends up being someone you sympathize with. Rene Russo plays a news producer and her fierce persona and professional insecurities may be the one element of the story that I doubt, but not for any reason in her performance. She bravely plays her age and status in in the world of
media entertainment and news. She is past her sell by date and her character is struggling to maintain a foothold in a very competitive business. I'd say her performance is also noteworthy and again, not very inspiring for future journalists out there. 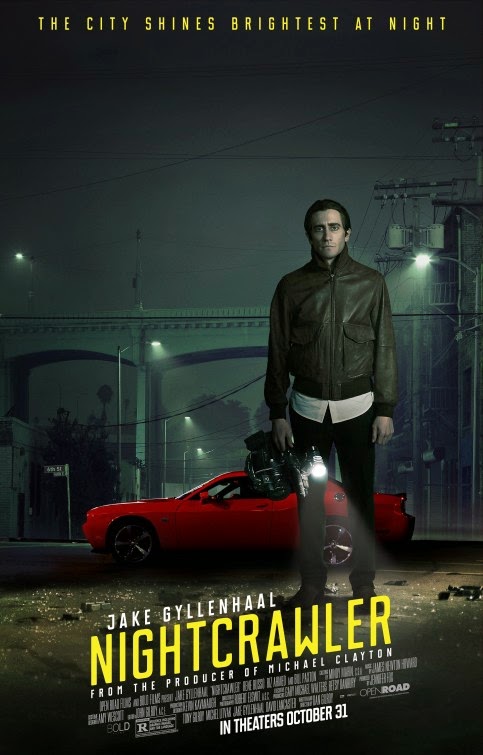 There are two extremely harrowing scenes in the film, one action based and the other suspense grounded. The crime scene filming has only an off screen piece of action in it but it creates an aura of dread that is thick. That same type of dread comes back as Louis and his assistant begin to follow a pair of criminals, waiting for the right video moment. The climax to this storyline is horrifying and action packed. The movie is mostly a slow burn with a great script and an amazing performance anchoring it. You may want to bathe after seeing this film, but you definitely want to see it.
Posted by Richard Kirkham at 11:19 PM

Great film that should garner awards attention (if there is justice). Without a doubt, Gyllenhaal's Louis Bloom is the Travis Bickle antihero of our age. On top of the fine performances, direction, and writing, it's another of those that uses the L.A. landscape as the unmentioned character in the piece. It's mesmerizing.

As you can tell, I was really impressed with it. The L.A. media comes in for some pretty harsh scrutiny.

If it bleeds, it leads. Truly.

This movie is getting a lot of attention and rightly so. I'm growing more and more impressed with Gyllenhaal. I've always been mixed on him but over the last several performances he has really shown himself to be a strong actor.

He was very impressive in this and I look forward to seeing it again. How many movies deserve that comment now a days?