I come to this post and this movie without any preconceived idea of how the movie is supposed to look or sound or even develop. I have not seen "Once", even though I own a copy and it has been strongly recommend to me. I will not be comparing "Begin Again", made by the same director as "Once", to a movie that I have not seen. It looks to me on a number of sites that this is exactly what other writers are doing. Whether that is fair or not I can't say. This review will be solely based on my experience today. I thought the film was wonderful. The style is interesting and I think it helps justify the title. I liked the actors, especially Mark Ruffalo, and the music was just good enough to believe in for the scenerio that the film creates.

Keira Knightly plays a songwriter, who lives with a musician on the brink of major stardom. Ruffalo is an A and R guy, on his way to oblivion because of his personal life. The movie starts with a single scene in a N.Y. Cafe, where would be musicians play their tunes for audiences that can be indifferent because their beer has just arrived or they spilled their drink, or the date that they are with has suddenly said something interesting and then no one is paying attention to the singer all of a sudden. From the moment of the performance we are then moved to two elaborate flashback sequences that bring us to that particular performance. Neither of the sequences is very pleasant for the characters but they fill the audience in on what the circumstances of the two main people in the story are. As the first flashback ends, it is as if someone reached up and pushed the replay button, so we begin again (See the clever title reference?, Much better than On The Road).

That structure might seem pretentious to some, but I enjoyed it and it reminds us as an audience that this is a story about two people, being told from different perspectives at times. What we as an audience might desire for either of these people, by themselves or together, is bound up with the stories of others and there are cross currents moving continuously. The subject of redemption and the theme of finding yourself are major components of what happens in the story, but the story itself concerns music. This story wants us to revel in music, The film visualizes the process of creating music in several interesting ways, including a fantasy segment of that opening scene. The biggest thing to take away from the movie is the power that music can have over you, both for good or ill. For instance, the musician Keira breaks up with has written a new and beautiful song, but it is so different from what he has written before that it is obvious to her that it was written for someone else. His song reveals things about him that he might have wanted to keep a secret.

Another example of how music can be so important in defining a relationship comes in a section in which Ruffalo and Knightly share their playlists with each other while also sharing the same device. It is a moment of deliberate self disclosure that brings them to the edge of a deeper relationship. As they walk through NYC listening to Frank Sinatra, Stevie Wonder and Dooley Wilson, they realize how much of the other person they can connect to. It may be one of those artificial movie moments but if you love music, it is a moment that you would hope to experience yourself. The creation of music is another place where people can connect to one another. There are several montages of recording sessions that the two of them and their rag tag group of musicians conduct in various NY locations, outdoors with the ambiance of the city as their studio.  Classically trained musicians come together with funk and hip hop artists and street buskers to make the music that our leading lady has written. The A and R guy is a former music producer who knows how to make it work and he brings just the right touches to each song and set up. As a side plot, the music also helps his personal life begin to reconnect as well. 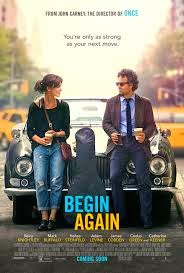 The music industry may take it on the chin with the business model that this story develops. Indie kids and media anarchists will love some of the criticism of the music business. Musicians will I'm sure identify with a number of the secondary characters as they struggle to make it as well. Talent makes out both for those who might be accused of selling out, but also those who hold firm to their convictions. This is a fantasy that aspiring artists will take to heart. I'm moved by music all the time. Themes from movies run through my head, pop songs from my youth are on a continuous loop when I look back at different points in my life. I love hearing a new song that I can connect to. I have never had the talent or the ear that it takes to be effected by music the way these people can be. I've had other passions and I can relate those pretty easily to the comparable points in music. This movie gets it for the most part. I will bet however, that it is going to cost you more than a dollar to get these swell songs on your ipod, phone, media device. That I'm afraid is one truth this fantasy cannot escape for the moment. There was one other piece of truth that the film shares. As Ruffalo's character refrains from drinking at a party, in part to gain control of his life, he instead picks up a can of soda to make his little toast with. I know that the meaning of his next statement is really about drinking soda instead of alcohol, but when he practically spits it out and asks, "how can people drink this shit?" as a loyal Coke brand consumer, I could not help but laugh  out loud and smile knowingly as he looks disgustedly at the can of Pepsi in his hand. Exactly my thought.
Posted by Richard Kirkham at 3:28 PM