Watch the trailer please, and then we will come back and discuss the movie briefly...

That looks like it could be a Jerry Bruckheimer produced action film. All that is missing is Keira Knightly and/or Orlando Bloom.

Now that we have that out of the way, I just want to talk about this movie for a short space. I've written on the subject before. "Monty Python and the Holy Grail" was one of the original films on my project when I started four years ago. If you go back and read that post you will know why.

Today's screening was a version of the film played for the release of the Blu Ray a couple of years ago. The film started with what must have been an extra on the Blu Ray disc, a ten minute review of some deleted animations by Terry Gilliam. It was a little disorienting because it started without any explanation. Fortunately the regular title sequence began after the new stuff and the mayhem continued from there.

If you have not seen "Monty Python and the Holy Grail", your film going experience is incomplete. This movie is the funniest film ever made. Anyone who tells you different is trying to sell something. I chuckled through three minutes of titles that have nothing to do with the story and when the people doing the sacking, got sacked and replaced with a South American crew making the same kind of credit jokes with a different animal, I just about lost it. None of the Pythons had appeared and I was already laughing. That's a good sign.

This is followed immediately by the most stunningly stupid but entertaining as hell visual jokes you will ever see. It all starts with the sound of a horse clopping along through a mist and over a hill. To say more for non-initiates would be a disservice. There follows a strange conversation about the physics of bird flight and a grim image that has another good payoff. Kids, you can always tell when someone is a King, they are not covered in the same stuff as everyone else.

Although there is a plot to the film, it is really just a series of sketches strung together with parts of Arthur lore. Camelot is disposed of with a quick song and dance and the knights proceed to demonstrate their wisdom,bravery and their clear sense of absurdity. This movie is almost forty years old, and if you went to see "Sex Tape", "22Jump Street" or any other so called contemporary comedy this week, you made a mistake. This was six bucks that is worth twice that and will leave you with a good tast in you mouth from the bad taste of British comedians from four decades ago.

Now before you attempt to cross the bridge of death, you must answer for me these questions three: 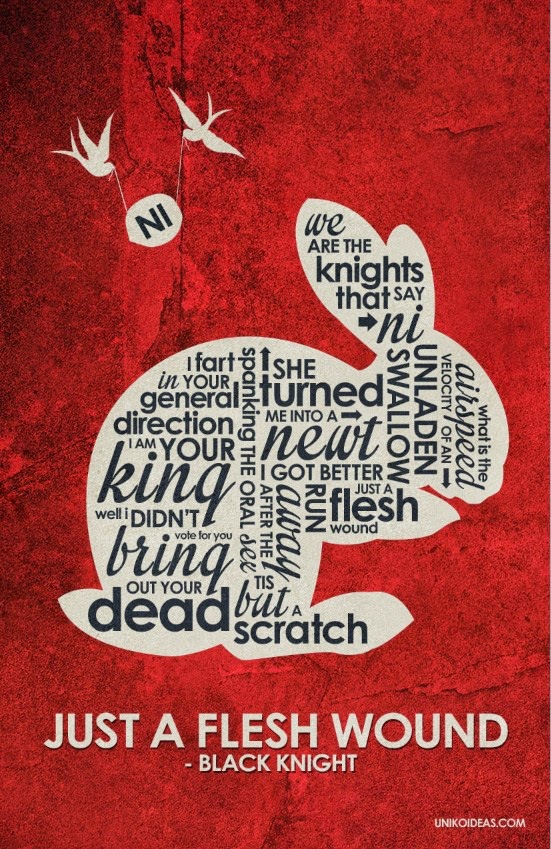 What is your name? (State your name at this point or be doomed)

What is your Quest? (You Seek Monty Python and the Holy Grail)

OK, you have your marching orders, go see the movie.
Posted by Richard Kirkham at 5:25 PM