Dawn of the Planet of the Apes


The original series of the Planet of the Apes films were some on the most interesting and thoughtful science fiction stories of the late sixties and early seventies. They explored themes of war and humanity in a Topsy turvy world where apes were the dominant species on the planet and the films  questioned the wisdom of humans who believed that they could reach the stars but could not stop destroying themselves. We discover that man has destroyed his home and lost the alpha position through nuclear annihilation. In the seventies, at the height of the cold war, that seemed to be the most likely scenario. Almost fifty years later, as the series is being re-booted, the threat to and from man has shifted from destruction in war to elimination by biotechnology. As we become more and more dependent on technology and the size of the planet shrinks due to easy transportation and open access to other countries, the threat shifts to disease and technology as the most likely pitfall for the human race. "Dawn of the Planet of the Apes" is a zombie apocalypse story with apes replacing the zombies and a new cold war developing between species. This new series again raises provocative questions about humanity, war, and nature.

In "Rise of the Planet of the Apes", the mutation that leads to a more dominant simian species is found in a laboratory. Cesar is the result of an experiment to fight Alzheimer's disease, the experiment results in an ape that can bridge the gap between animal instinctive behavior and reasoning type thinking. This sets up the current story by allowing the apes to populate a section of the Bay area (I assume it is Point Reyes)  while thousands of human survivors of of what they dubbed the "Simian Flu", struggle to rebuild civilization after more than ninety five percent of the human population has died. The story picks up ten years after the plague and shows us once again how human need for technology can be threatening to the peace of the planet. I appreciated that this part of the story was more subtle and less moralizing than it could have been. There are also dark hints about what happens to the human population when technology breaks down. It appears that civilization requires a certain amount of sophistication and technical ability or the result is brutality and savagery become the social structure. 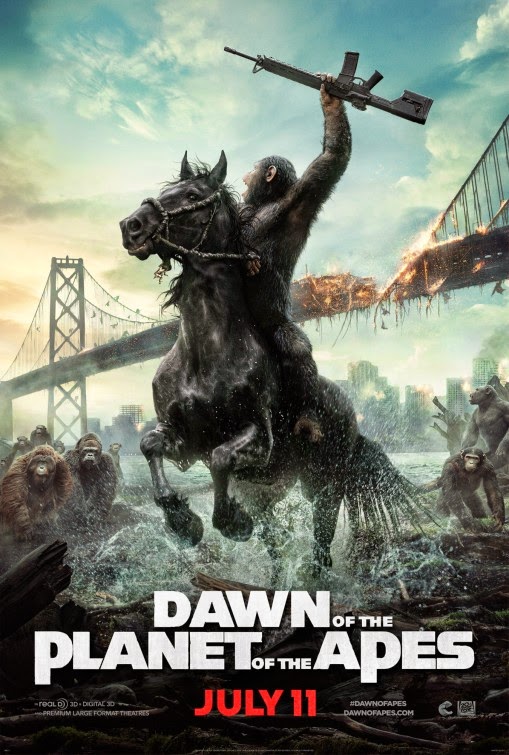 The ideas of the film and the story itself are quite admirable and are enough to recommend the movie. I do have a bit of a reservation that I hope will be taken in the proper spirit as opposed to a direct criticism of the film makers. I recognize that the apes are still in a primitive developmental form. They communicate at the beginning of the movie using a sign language that Cesar has taught them. When the first utterance of a word by an ape occurs, it is a dramatic moment. During the rest of the film, the apes use a combination of spoken and sign language, and the spoken language is the issue that concerns me. To paraphrase "Spinal Tap", "It's a fine line between stupid and clever". The Tarzan lingo sounds like Indians in a western from the 30s at times. If people can suspend their disbelief for the apes developing a more sophisticated civilization, than most will be able to do so for this communication process. In an attempt to make the transition to a new culture more realistic, the screenwriters have relied on a tool that can easily be mocked. Later in the movie, as an ape rides a horse, through a wall of fire, with machine guns blasting from both hands, it is a cool visual moment, but it also invites another opportunity to mock the seriousness of the tale. Once again, I think the tightrope is strong enough to sustain those willing to go along but I can imagine that this would be rich territory for parody down the road.

Jason Clarke is an actor that I have become familiar with in the last couple of years. As his career has grown, the parts have put him into movies that I am now likely to see. He seems to have had an extensive career prior to 2012, but with "Lawless", "Zero Dark Thirty", "The Great Gatsby" and "White House Down", I know now that I have seen him before. Andy Serkis is still the lead of the movie, but Clarke has to be the character we place our trust in and he manages to convey decency in a world where that standard is not always valued. Serkis again does a marvelous job with the motion capture work. It's great that he is getting steady work in big films but it must be a little frustrating that almost no one would recognize him from those movies. (On the other hand, it may be a great delight to have that anonymity). Gary Oldman is the biggest name in the movie and he is not really a star despite being one of our best actors and being featured in some of the biggest movies of the last fifteen years. This is not a star vehicle and Oldman plays his role effectively, although he is absent from the story for more than eighty percent of the film. I also appreciated that he was not cast as a villainous human bent on war with the apes. That humanity contributed to the bitterness that prompts the outburst of violence that comes, it was refreshing to see the screen writers acknowledge that the emerging ape community will suffer the same pressures and failures that humans did. It speaks to a more universal truth than simply saying "humans are asses that will destroy the world". 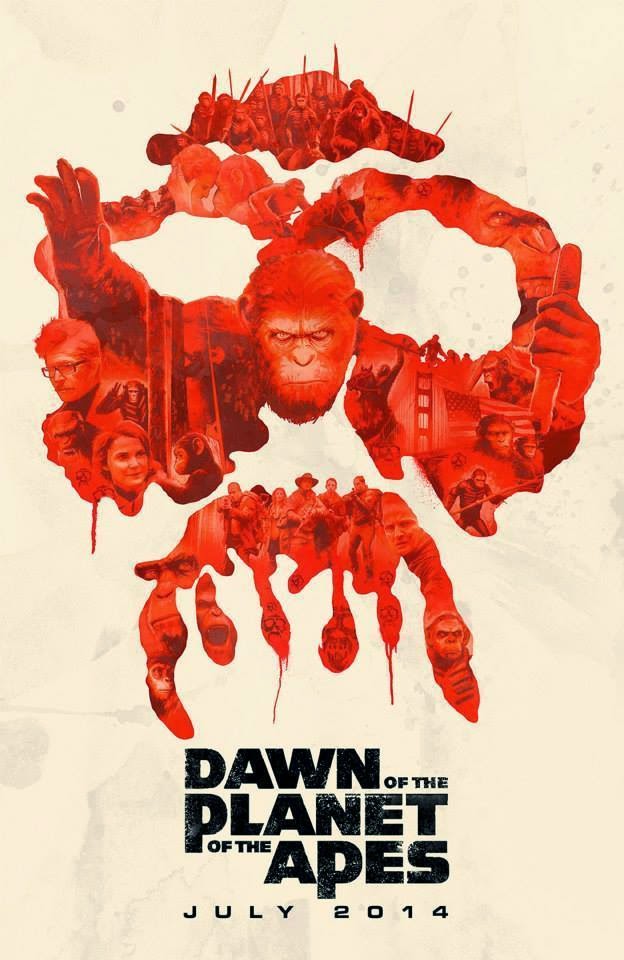 The army of apes is matched only by the army of technical credits listed to bring them to the screen. In some ways the depiction of the apes here is so technically superior to the masks of the seventies films, that it could render those movies quaint relics of their time. There is still something unnatural about the CGI creatures that sometimes makes the film feel a bit mechanical, but then there are bits like the newborn son of Cesar, interacting with the humans, that will make the barriers between CGI and animals or actors disappear. The film tells an exciting and thoughtful story with enough action to keep a broad audience involved, and a more thoughtful audience challenged. That is a second balancing act that has been managed here. I like the fact that the titles at the start of the films ape (yes I made that joke) the font from the original series. So far, the two story lines of the two versions of the franchise have managed to coexist. The story is set up for further development and doubtlessly, "Rule of the Planet of the Apes" will be coming to a theater near you sometime in 2017.
Posted by Richard Kirkham at 3:26 PM

Solid review as always. I liked this movie a lot, more so than the first film of the reboot. I just struggled with some of the plot lines that were yanked from a number of different films. Still it is smart and highly entertaining.

If you can find the John Kenneth Muir post on this film, you'll see some interesting ideas about the film's stories origins. Thanks for commenting Keith, it's always nice to know what readers think.