Why anyone would need a review for this is not clear. If you like the idea of watching giant monsters destroy a city and battle it out among themselves, then you will already be queuing up for this and you will have a good time. If you think that special effects movies and worldwide destruction are being over done in films these days, then you will probably want to stay home and find a more intimate horror film to spend an evening with. All in all, you will get what you expect from this movie. There are some surprises, and some disappointments but they are minor in contrast to the spectacle of a 300 foot high  gorilla-like lizard wrecking havoc on most of the stuff around him.

The movie is fortunately a slow burn. Some people want the money shot from the get go, but like romance, anticipation and deferral can make the ultimate outcome so much more rewarding. There is an effective action beat to start the movie but it may be unsatisfying because we don't really see a monster or even know for sure what is going on. Bryan Cranston plays a supervising engineer at a nuclear power plant in Japan. I like Bryan Cranston, I've never seen "Breaking Bad" but I know his work from many other movies and TV shows. His performance is a little consciously showy. He is not quite chewing the furniture because the part calls for him to be a bit "mad", but it is noticeable that he is playing it that way. His wife is also a specialist who is responsible for monitoring and controlling leaks of radioactivity. She is played by the Academy Award winning actress Juliette Binoche. We have barely had time to get started when before you know it, both of these characters disappear from the story. Flash forward fifteen years and their son played by "Kick Ass" star Aaron Taylor Johnson becomes the focal point for the story. All three are excellent but they have little opportunity to emote or build character because the real star of the movie is a big monster still to be revealed.

Father and son briefly reunite to discover the truth behind the accident at the nuclear power plant a decade and a half earlier. The original Godzilla from the 1950s was a mediation on the dangers of nuclear war and the power of radiation to destroy the planet. This story is more about the dangers of government cover up and the risks we take when we seek to supress information rather than shine a light on it. This last couple of sentences suggests a level of philosophical thought that is never really developed or cared about. It is just in the background to give us something to pay attention to until monsters start duking it out. This movie is filled with halfway developed points to keep us involved until something reaches it's creepy foot out of a hole to do some destruction. Taylor Johnson has a wife and son who are neglected by his military career but love him anyway. Academy Award nominees Sally Hawkings and Ken Watanabe are scientists with something to say about the dangers of screwing with the environment and the power of nature, but they are simply the heralds for "Godzilla" himself. A lost little boy will be a surrogate for Taylor Johnson to care for at a given point.

Last year in "Pacific Rim" there were giant robots fighting giant monsters. In "Godzilla", following the tradition of dozens of Japanese predecessors,  monsters fight each other and we are bystanders with a rooting interest. The explanations for the MUTO monster are a bit confusing and they are placed in the narrative in a way that tries to avoid having some scientist give us a lecture for five minutes, but they are coming at the same time that we are being delivered information about "Godzilla" and that made some of the characteristics unclear. It will only bother you for a couple of minutes because soon the monsters are tearing up cities and being general douches on a grand scale, and at that point no one will be thinking about their origins, mating and eating habits. Not when Cesar's Palace is getting shredded before our eyes. There is a good sequence featured in the teaser above that shows a HALO action and makes use of the same style of wailing choruses found in "2001". However, it is the monster fights in the big cities that everyone came to see, and except for the fact they are frequently shot in the dark, with dusk clouds obscuring our vision, they are pretty good. 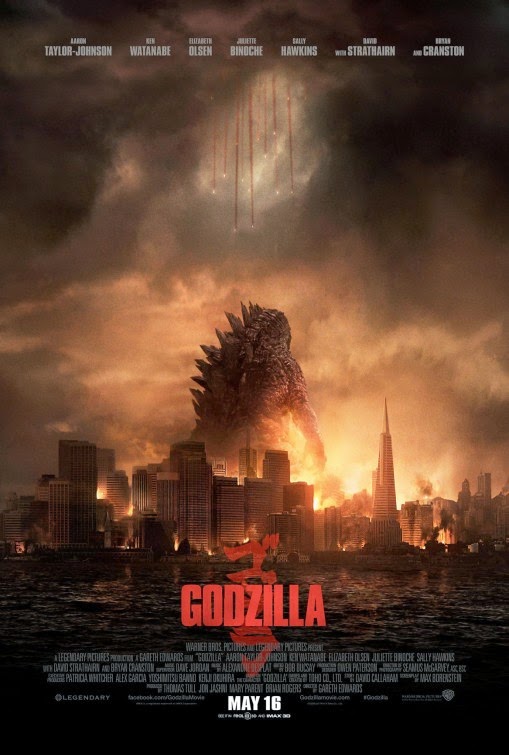 We ended up paying $16 a ticket to see this in 3D at a time that worked for us. You absolutely do not need to see this in 3D. There was nothing special or dramatic or interesting that was enhanced by the third dimension. Now the volume in the theater and the size of the screen will make a difference to you so be sure to take that into consideration when making a movie selection. "Godzilla" will be a place holder in the summer movie line up. It will do good business and people will be entertained for the running time, but it is not special enough to think back on for long or to see a second or third time. Half of my enjoyment of the movie came from the Hot Tamale candy I dumped in my box of buttery popcorn. Searching for one of those treats was able to distract me enough that I could ignore how standard much of the movie narrative was. I don't know that American audiences will take Godzilla to heart as a hero like the Japanese have, but if you liked the T-Rex at the end of Jurassic Park, then maybe a "Godzilla" stuffed toy should be under your Christmas tree this year.

Posted by Richard Kirkham at 11:00 AM

Bravo on calling out that there is no need for 3D here; I don't remember any particular scene where something was enhanced by it.

Not even a flying piece of debris comes out of the screen at the audience. I'd have skipped it except that a regular screening would have required a late start.

The only thing this new GODZILLA film has inspired me to do is to watch the original 1954 Japanese film that started it all. And yes, Hollywood hasn't learned a damn thing since 9-11 and continues to take great pleasure in destroying our American cities on film!

Fine review, Richard. I very much enjoyed this, but agree the 3-D (certainly the added cost) was not needed. When I go back to see this, I'll settle for pedestrian 2-D and be more happy.

Eric, I know what you mean about the wanton destruction of cities in movies. It has been a long tradition but after 9/11 I remember feeling extremely uncomfortable watching Armageddon and seeing NYC get clobbered. Context changes things. Man of Steel had the same effect on me. Revisiting the 1954 film sounds like a good idea.

Michael, thanks for updating and letting me know what you thought. I did not see anything that justified a 3D version. And as you could tell, it irritated me that I ended up spending the money.