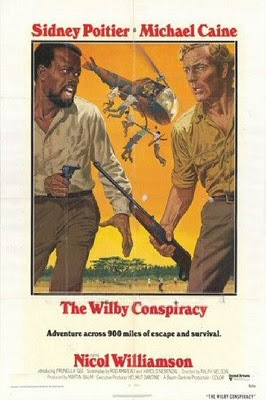 This is an interesting movie for a number of historical reasons. The kids growing up today do not live in a world where the majority of the population of South Africa is subjected to harsh and repressive rules imposed by a minority of the population. Apartheid has been gone for almost twenty years now. Nelson Mandela is a revered world figure who served as President of his country after getting out of prison in that same country. Last year the movie Invictus, told the story of South Africa ultimately embracing it's largely white rugby team in a story of reunification. It was a beautiful ideal, but the movie failed in part because it seemed political and most of the young audience today was not exposed to the brutality that existed in South Africa before they were born. They largely lack a context.

The Wilby Conspiracy, provides a kind of context. It is a fictional action story but it is set in a very realistically portrayed 1970's South Africa. In those days, a black man needed a pass to be on the streets, the blacks were largely limited to "reservation" style tribal lands to live. The power of the police to detain, imprison and even kill was unchallenged. Civil disobedience, violence, worldwide political pressure, and finally the inability of those in power to stomach what would be required to keep the system, lead to it's downfall. Wilby is set before the death of activist Steven Bikko, and the revelations that accompanied his death. Sidney Pointier plays a convicted rebel, for whom charges are being dropped after being imprisoned for ten years. His lawyer is a woman that champions reform in South Africa, and she has a boyfriend as she is separated from her husband. The new boyfriend is played by Michael Caine. As the three of them are leaving the prison, police checking passes assault them on the streets and suddenly they find themselves on the run. It turns into a mismatched buddy picture without the humor and instead, surrounded by intrigue and betrayal. 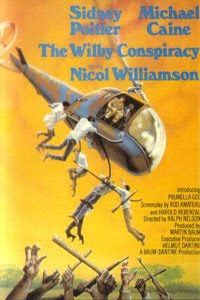 There are many examples of the injustices that people in South Africa suffered illustrated in the movie. The suppression of classes extends to the large Indian community in S.Africa as well. Saeed Jaffry plays an Indian dentist that is involved with the revolutionaries. This same year he co-starred with Michael Caine again in the "Man Who Would Be King". He is good in both performances, but I have loved the Man Who Would Be King for 35 years and Billy Fish is one of the reasons. His associate in this movie is played by Persis Khambatta, the actress featured in the first Star Trek Movie (She has a shaved head there). She later co-stars with Rutger Hauer in Nighthawks, Hauer is in this movie as the pilot ex-husband of Caine's girlfriend lawyer. (Got all that?) By the way, Caine and Hauer are also in the cast together in Batman Begins. This movie is it's own little Six Degrees of Kevin Bacon. Nicol Williamson, plays the security officer in charge of exploiting the situation to recover lost treasure, or at least that is what it seems.

There are some good lines in the movie and a few solid action scenes. The South African security forces are as villainous as you would expect. Williamson's second in command is a sadistic racist in a position of power that he enjoys exploiting. After humiliating the lawyer with a physical search by a doctor, he uses the notion of an even deeper search as a motivation to break her. The gleam in his eye as he suggests a more painful repeat of a body cavity search is disgusting. If this movie were made five years later, the retribution he receives would have been visualized in a more satisfying manner. Here it is simply conventional. Williamson also deserved different, but I don't want to give too much away. I once gave an extemporaneous speech on Apartheid, defending the Afrikaner position. I was looking to be distinct in the round and hoping to move into another elimination round (it did not work). I must say that I can't disagree with the judges, that it was hard to defend that point of view. I'm sorry I did it, because it really was indefensible. There are double crosses and hidden agendas in the movie throughout it's run. The action used in the final confrontation is visually interesting, but logically stupid.

I think Art and I saw this movie at the Temple Theater, but it could have been the Alhambra. I'm sure it was a double bill but I can't remember what the other feature could have been. This movie is largely forgotten, as illustrated by the fact that the only video on line for it is a TV promo. The trailer on the DVD does a good job of selling this as an action picture. That is not a misleading sales pitch, but the movie was more politically charged and that is missing to a large degree. Oh yeah, there is one really big laugh right at the end of the movie. The usual disclaimer appears saying that this is a work of fiction and does not represent true events in South Africa. I can just hear 18 million black South Africans roaring at that line.
Posted by Richard Kirkham at 8:43 PM