The second Monty Python film on the list, and it is just about as funny as Holy Grail. If you were to compare them exclusively on the quality of production, "Life of Brian" has it all over the earlier film. My only reason for preferring the first film is the memory of seeing it and the reaction that my Dad had to it. This experience was quite a bit different. This movie came out in the late summer of 1979. I was just a week away from starting graduate school and it was hot. Dolores and I went to see this with my Dad's friend Rusty, who I have written about before. I don't think she ever went with he and I to a movie before or after, so it was an easy piece of info for me to retrieve out of my brain. Dee, when you read this please post and tell us if you remember anything about that day yourself. 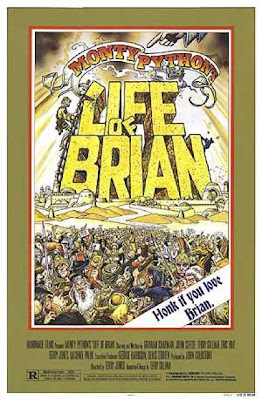 I think our original plan was to see "Apocalypse Now" at the Cinerama Dome, but we could not get in. It had just opened in a couple theaters in the country, and shows were sold out early. So we cruised on over to the Chinese Theater on Hollywood Blvd., and Life of Brian was starting in just a few minutes. This was the first movie I remember seeing in the new theaters at the Chinese location. Up until that time, the theater had been a stand alone house, it must have seated 1500 easy. The trend was clearly moving to wider releases of pictures and I guess the Mann company, that owned the Chinese at the time, believed it needed to be able to show a greater variety of films to succeed. There are six screens there now (other than the main house) but in 1979, I think there were only two new theaters and Life of Brian was showing in one of them.
Grauman's Chinese Theatre - Live Webcams - Mann Theatres 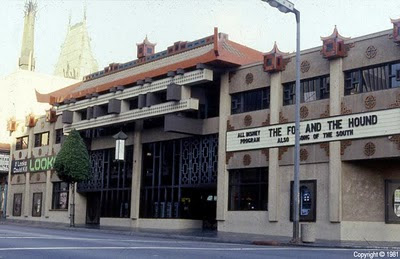 Everybody remembers the final song in the movie. I recall Dolores, Rusty and I laughing and singing it out in the foyer of the auditorium after the movie was open. I think the Twin Theaters there had just opened that year and we were hanging around a bit to look around. The whistling was something we could not resist and people coming in for the next show must have thought we were idiots. There was a lot of controversy when the movie opened because some religious groups, especially in Great Britain, objected, saying the movie was blasphemous. It is of course not, because Christ is not the subject of the movie, he makes only a small cameo appearance at the beginning. The movie is about fanaticism and the stupidity that drives it. All of which is discussed with the casual British humor that was typical of Python material. The other thing that people will remember about the film is the two minute ride by Brian in the space ship with aliens who are holding their own eyeballs. It made no sense, had nothing to do with the movie, but the image was so striking and it was so out of place that it was funny and memorable. 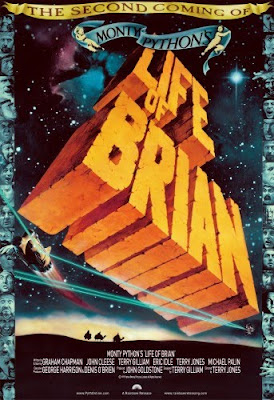 There are dozens of quotable lines from the movie. My guess is there are people out there that do the whole resolution writing scenes and riff on them over and over. They are quite clever, but it is context that helps make them funny, for me the stuff that sticks out is always the silly material. For instance, the Roman names Maximus Naughtieous and Biggess Dickiss, are completely immature, and as a result, funny no matter when or how you throw them into the conversation. I also get a kick out of the one scene with the Roman centurion, giving Brian a Latin lesson in the middle of the night during an attempt to put up some graffiti. One of my favorite lines from the movie comes when Reg is trying to direct all the supplicants for Brian and he asks all those with devil possession to try and keep the demons under control. John Cleese is so droll it is a marvel.

A few years ago we saw a concert presentation at the Hollywood Bowl, featuring Eric Idle. He was basically doing an expanded set of numbers from Life of Brian, similar to the Spamalot success they had on Broadway. I don't think it quite jelled but there were many amusing moments. We are pulling into the final couple of weeks on this blog and I am enjoying reminiscing about that August in 1979. I was about to be a coach on the Trojan debate Squad, my girlfriend and I were so in love that we would be married in less than a year (and still going strong 30 years later), and my grown up friend who was actually just a big kid, took us to the movie. We may have had lunch at the Hamburger Hamlet across the street, that I don't really remember, but it was likely. Anyway, if you have never seen the "Life of Brian", put it on your list now, because you deserve to have some good memories as well. 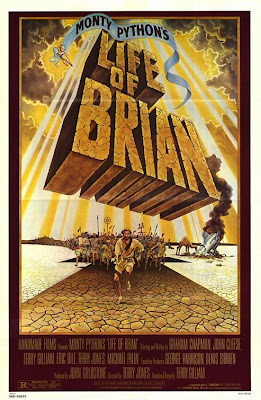 Posted by Richard Kirkham at 2:59 PM