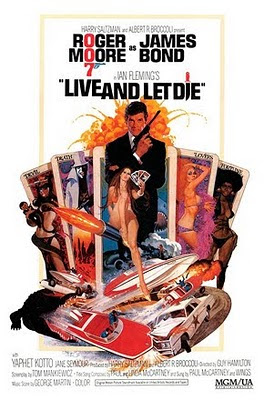 Today's film is my favorite Roger Moore Bond film. Live and Let Die was released in 1973 and was Roger Moore's first film as James Bond. Now, Moore isn't my favorite Bond, Sean Connery is, of course. Connery is, I think, the perfect representation of Ian Fleming's Bond. He has just the right amount of charm, sarcasm, badassery and dickery (Allison's word). Moore is also good for the interpretation that he does. I like the puns and gimmicky stunts and gadgets. He's the "funny" Bond, which works well for the stories told in his films.

Live and Let Die is an interesting film in the Bond series because, not only does it have to introduce a new Bond, it has to do so after the filmmakers already tried a new one, and went back to the original. Moore is very different than Connery and Lazenby, although more so like Lazenby. They had to establish him as a different character and I think they did a pretty good job. He is still the charming, flirtatious Bond but now with a little more humor and corniness. It works, and so does Live and Let Die. It has Jane Seymour, a pretty cool boat chase, and the amazing alligator/crocodile stunt. It drags a little at some points but I think it makes up for those moments during the action sequences. It's also restricted by a lot of 70s' trappings like costuming and some of the technology. However, I think the Bond films still work years later because the action is still thrilling, the women are still beautiful and Bond is still every one's hero.

I just saw that Tom Mankiewicz passed away on July 31st. I had the good fortune of seeing Live and Let Die on the big screen a few months ago for a class I took on the James Bond phenomenon and right before we watched the film, he did a Q & A with us. I also saw him at a panel I attended with my dad that USC set up for the James Bond Festival they put on that my professor actually hosted. I realize now how lucky I am to have had the opportunity to hear him speak on something he seemed to take much pride in. He told us many stories and he was a joy to have come to our class. I just can't believe that I saw him just a few months ago and now he's gone. I really enjoyed hearing the stories he told us about working on the Bond films. His favorite seemed to be the one where Albert Broccoli made sure he got a suite when working on Diamonds are Forever. I believe he said Broccoli spoke to Harry Saltzman, who explained that the suite would cost more than they were paying Mankiewicz. Broccoli responded with, "I don't care. He's writing the f*@king movie."

I really like this film and I am so happy I had the chance to hear from the writer, not once but twice. I can't believe he's gone. He seemed so happy and full of life when I saw him and he seemed incredibly proud of the work he did. I have enjoyed his films over the years and I expect that I will enjoy them for many more.

I love the James Bond character and I have enjoyed all the interpretations so far. I was worried though, and even asked the creators of the last two Bond films at the panel whether or not they were concerned, that the films were getting too serious. I love the new style and approach taken but I worry that some of the things that make Bond so fun and enjoyable to watch is being lost in these new films. I think each Bond has contributed to what the character should be, and is. Connery personified the character by lifting him from the pages of the novels and onto the screen. He gave the character life. Even Lazenby contributed by showing a different side of the character. And Roger Moore made the character light and funny. I know the character's main sensibilities come from the writing but I really do think the actors make the writing real for the audience and contribute just as much. Both are needed and both are just as important and I just worry a little that all the work done on the character by all these great actors and writers may be tossed away in the upcoming films (if we even see a new one). I just hope the creators remember what the character has been through and how it has grown. Bond really is the world's hero. He deserves the best because he has provided material for many entertaining stories that generations and generations of people have enjoyed. Every time I see a James Bond film I am surprised by new things I discover about the film. I hope that in the future, I will continue to enjoy these and future films and be able to share my love of the character with those I love.
Posted by Richard Kirkham at 3:14 PM

I am so glad you did the Bond film. I was thrilled when we got to go to that panel and you are right about how lively he seemed. In addition to Jane Seymour my favorite things about Live and Let Die are the awsome title song and the tarot card motifs and designs. Mr. Big blowing up at the end also gives me a giggle each time I see it.