I sort of put his one off till the end of summer for a couple of reasons. First of all I would need something inspiring and happy when I return to work, which I did today. I love my job but sometimes it gets to be a grind, and it is nice to remember that there are wonderful things out there to sustain us through a lot of the mundane stuff that goes with the job. The other reason that I waited is that this is going to be an emotional post for me. This is the one film on the list that I know I saw with my brother Chris. My brother died in 1975, he was only 24 and he should have had a lot to live for. When my father was living with us after my mother had died, he suffered from Alzheimer's and he never called me by my name. When he would see a picture of my brother he did not remember his name either but he did call him "the lost one". That is how I think of my brother as well. He is the guy we lost who had a great sense of humor, was a good friend to a fault, and was a sweet person all around. He could never get his life together and drug use and despair finished him off. Four years before he died, when he was twenty, he took me, my then 9 year old brother Kirk, and his girlfriend Michelle to see Willy Wonka. 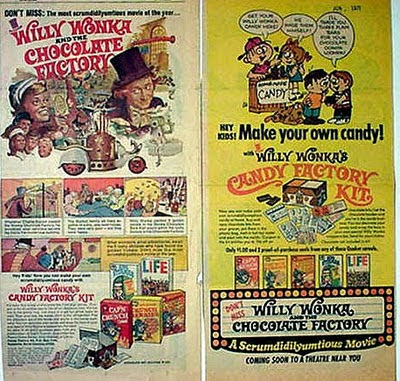 My kids enjoyed Charlie and the Chocolate Factory with Johnny Depp, but they were never in doubt as to who Willy Wonka really is. Gene Wilder is the heart and soul of this movie. If you listen to the script, Wonka is sometimes a bit of an ass, he can be thoughtless and mean. I remember feeling jolted when he had his final tirade against Charlie and his grandfather. I was devastated and knew the rage that Grampa Joe felt in wanting to get back at Wonka. Charlie's gesture at the end, the innocent recognition by a child that he was in fact in the wrong, and was not really justified in breaking his promise to Wonka despite his hurt, is the key moment in the film. There are lessons subtlety placed elsewhere in the movie, but this is the point where a good honest act redeems both Charlie and Willy Wonka. It was the kind of thing my brother Chris would have done. He always saw after the fact when he was wrong, and was quick to apologize and make the right kind of gesture. It breaks my heart that he could not learn the other lessons of life before he had to leave us. If he could have recognized limits earlier in his life, things might have gone differently. In the movie we had the magician Willy Wonka, he fools us from the very beginning, but the twinkle in his eye and the physical movements of Gene Wilder, tell us that anything is possible. I like to think that is the case with all of us, that something wonderful can happen and we will live up to that moment.

From my point of view this movie is bullet-proof. It doesn't matter that there is one song too many in the opening half of the film. It never bothers me that the Ompa Loompas can't really dance and that their somersaults are incomplete. I have read from some social critics that Charlie deserved to be punished because he too acted in a manner that was inappropriate, but Charlie knows it, the others would blame Wonka, he blames himself. His wordless apology is a good example of how actions and behaviors often communicate so much more than words can. The effects are not always perfect, but the imagination behind them is, and all you have to do is get carried away by the story of this boy that wants so much to do what is right. If you don't have a tear in your eye when Charlie gives his wages from delivering papers to his mother, except for the few pennies he hold back to make sure his beloved Grandfather can have tobacco, than there is something wrong with your heart, and you need to have it fixed. He never complains about his circumstances, he only tries hard and hopes for the best. If you pay close attention, the second chocolate bar he buys, the one with the golden ticket in it, he actually buys not for himself but for his Grampa. There is another lump in my throat has he dashes off to share his good fortune with his family. I remember all of us in the theater that day cheering, even though we knew it was bound to happen anyway. 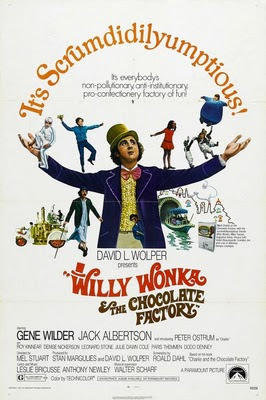 The production design on this film is legendary from a kids point of view. Who would not dream of a chocolate factory with edible dishes and wallpaper that is lickable? A chocolate river, and candy with gumballs dropping from the trees is the stuff of dreams and stomach aches. The colors are so vivid and the scene so lush, that it is nearly impossible to believe that it is not real. The golden egg laying geese are huge, and the mysterious machine that makes everlasting gobstoppers may be just cardboard and sheets covering some lame looking contraption, but we all saw a secret that we wanted to be true. The first moments of the movie, the shots from outside the factory at night, with the giant letters spelling out WONKA in the gloom, suggest mystery. I love the line that comes after one of the parents shouts out in frustration, "What is this, some kind of Funhouse?", and Wonka just looks back and asks, "Why, are you having fun?" This is the perfect attitude for the character to have. This is his factory, and it will work the way he wants it to, not the way others think it should. There is stuff for adults in the movie as well. I enjoyed the payoff response from the computer programmer who is trying to locate the golden tickets, when the computer asks what a computer would do with chocolate if the programmer shared the prize. There is a funny shot of a TV reporter with deer horns just because of where he is standing. Mr. TeeVee's one line of dialogue cracks all of us up.

I saw this movie when I was thirteen, I should have been a little old for it. Cynical teenagers are never a good audience for a movie that depends on a sweet natured character, or a sense of wonder that is childlike. I lucked out because my childlike older bother, took us to this movie. My parents were probably at a club date, and we were being watched for the afternoon by Chris and his girlfriend. Both of them were naturally softhearted people and it would just be wrong of me to be a pill because of adolescence. We went to the Alhambra Theater on Main and Atlantic to see it. My little brother loved the movie as well. This is probably the only experience I had with the two of them together, doing the thing I most love in the world. I'm glad that I can still remember it and the "lost one" that gave me that memory. 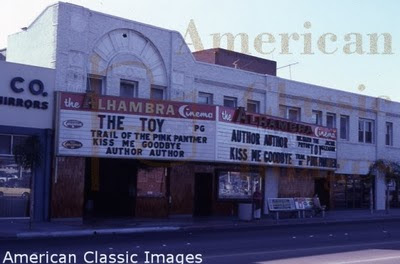 Posted by Richard Kirkham at 6:13 PM

If I thought your Monty Python post was a tearjerker, I certainly wasn't ready for this.

I love movies. I love movies because of you. Mom contributed, to be sure, but the pure joy you take in watching even the stupidest movies is something that Amanda and I share every time we quote along with Con Air or Fired Up.

I'm happy that you love film, and that you've shared that love with all of us, Mom, Amanda and I; but I'm even happier that I still have the chance to make memories like the one you have described here with my baby sister because of the same enjoyment of cinema that you fostered in us.

And you're welcome to come along to, 'cause God knows what you'll do if we start going to see a bunch of matinees without you. :)