I remembered this movie extremely well, even though I have not seen it for twenty years. The first time I saw it was on it's release in 1971. Sean Connery appeared in his last "Official" Bond project the same year this came out (Diamonds are Forever). In this movie the character has none of the charm or sophistication of 007. Duke Anderson is a tough burglar, capable of violence but not really prone to it. There is a self righteous speech he gives to the psychologist at the prison on the day that he is released, that indicates he is angry and a bit of a sociopath. From the very beginning though, we see a pretty good relationship with a younger criminal and an old timer, that tells us that though he is a crook, he may not be a bad guy to know. I don't think I saw many movies with my friend Mark Witt. We met at Margarita Elementary School in the 7th grade, and we were good friend until we graduated Alhambra High. I seem to recall going with him to the Alhambra Theater for this film. Although I remember the film quite well I am a little fuzzy on the circumstances.

Sidney Lumet is the director of this movie and he made several excellent crime films in the 1970s. Dog Day Afternoon and Serpico are the best known of these films, both are rightly celebrated. It is unfair that this movie does not have the same reputation. The actor's roles are not as flashy, but the direction of the movie is taut and very much in keeping with the gritty atmosphere of other New York based crime films. Let me point out two illustrations of how this movie reflected a real New York early 70's vibe. The police squad that is asked to enter the building that is the scene of the crime, is shown struggling to get across the rooftops of the building next door. Their climb up a wall is not smooth but rather quite labored. Garrett Morris, who later appeared on the original Saturday Night Live, plays the leader of the team. After he slides down the rope from one building to another, and lands on the roof, he looks down at his hands. The skin on his palms is torn, there is blood and obvious pain on his face. This is not some anonymous SWAT team, that mechanically does their jobs like perfectly programmed robots. These are guys struggling to do the best they can in the situation and not always rising up to the moment gracefully. Another example of the grit that Lumet adds to the movie is a short insert that has nothing to do with the story. I would be really surprised if it was even in the script. Two ambulance attendants are down on the police perimeter getting the ambulance ready if the police raid goes bad. One of them is replacing a pillowcase on a pillow in the ambulance. If you look quickly, you can see that the pillow has a big bloodstain on it. The case will cover that and make the pillow look fresh, but we all know that there is nothing clean and starched about what is going to happen. It's a two or three second shot that tells you this is real. 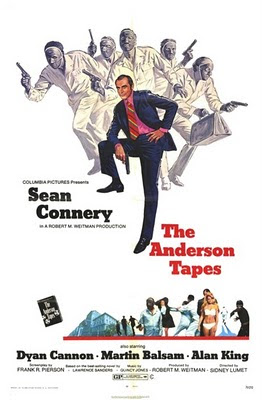 This is Christopher Walken's first adult role after being a juvenile actor on Broadway and TV. You can tell by watching him that there is something different and compelling about him as an actor. I already wrote that these were not flashy acting roles, this is an ensemble crime drama, but everyone adds some special touches. As they get released from prison, Walken's character talks about wanting to just eat America up it is so great. He has a fun flair with that line. Martin Balsam is in this movie doing a gay character and the stereotyping is something that GLAAD would be all over today. Both Balsam and Connery are wearing toupees,but we are supposed to notice Balsam's character has one on. Alan King plays a mob boss who is financing the teams elaborate holdup, I mentioned Garrett Morris already. Dyan Cannon, is once again the bombshell looker (or in this case hooker) that fills the female part, but it is a small role as well. It should be noted that there is some sexuality but no nudity. It was shot in the discrete style of the early seventies. If you compare it to Sidney Lumet's last movie,"Before the Devil Knows You Are Dead" you will be amazed at the shift in cultural guidelines.

The story is told in a distinct style that in part explains the Title. This crime was being planned and many police agencies should have been able to figure that out. The mob boss is wiretapped by the IRS, the decorator is the subject of an FBI investigation on antique fencing, the girlfriend is being eavesdropped on by her client who hired private investigators to wiretap the apartment he provides her. The Kid played by Walken is being monitored by the Narcotics Bureau in NYC. Of course there is a lot of public electronic video as well. This movie was made in 1971, here we are today talking about some of the same privacy issues and now everybody is watching on-line. In my blog on "The Life of Brian", you will find a link to a web cam at the Chinese Theater. You can look at Tommy Trojan 24 hours a day. So the premise of the story is we hear about all the set up through the surveillance that is going on. Pieces of the puzzle are brought together in an interesting way. The outcome is told in an equally interesting manner. We get a series of flashbacks from interviews done with the victims after the crime is over. Storytelling is very innovative and interesting in the screenplay and shooting of the movie.

All of this came out two years before we had heard of the Watergate Tapes and the famous 18 minute gap. When the feds doing illegal wiretaps here that the character played by Connery is on their tapes, they panic and start ordering the tapes be erased. This was really prophetic,given the way the Watergate investigation went down and the Oval Office tapes robbed Nixon of his legitimacy. Today, with digital recording, the information would end up in so many places, you could never be sure that it was all wiped out. The climax of the film involves a shootout, a brief car chase and crash and some mystery. It happens quick so pay close attention. If you are reading this blog because you are interested in 70's films, you really should see this. It is not well known, but it has all the hallmarks of a classic 70's heist picture. I suggest a double feature with this and the original "Taking of Pellham 123", you will have a great afternoon or evening in the presence of real film makers.
Posted by Richard Kirkham at 1:10 PM