1978 was the height of the disco era. In the first three months of the year, the Bee Gees had five top ten songs in the same week. John Travolta was nominated for an Academy Award, and the music was everywhere. Dolores and I were going into our senior year of college and we loved going out, seeing movies, listening to music and eating well. We were not big party people, certainly not in the way people ask today if you party. We went to college parties and enjoyed ourselves but we never learned to dance, I did not drink and neither of us got high. So it is a little strange that we enjoyed this time in the country so much. We listened to Kiss in the car all the time, and went to concerts, but we could not be part of that "Death to Disco" crowd that sometimes came out, because as far as we were concerned it was innocuous fun. Today's movie came out in that summer and I remember seeing it with my beautiful girlfriend, and we were almost certainly wearing polyester, even if we weren't going dancing.

This is the movie that earned an Academy Award for disco music. "Last Dance" is a perfectly good disco song, and Donna Summer is always terrific. When we saw her at the Hollywood Bowl a few years ago, she was still great in her voice and the music always gets people up and moving even if they don't dance. I hate however, that the finest composers of what was labeled "Disco" music, the Brothers Gibb, never received any Oscar mention. Their songs from "Saturday Night Fever" an excellent movie and THE soundtrack of the disco era were ruled ineligible because some elements of the music originated before the contract to do the movie soundtrack was signed. So, three months after the Academy gives it's award for 1977 to the treacle Debbie Boone song, this movie came out. The next year the music guild in the Academy seemed to be trying to make good by giving an award to Paul Jabara's song played at the end of the movie. It's a good thing that most of the guild did not realize he also acted in this film. His role as Carl, the obnoxious near-sighted horn-dog that got locked in the stairwell, almost ruins the movie.

There is really not a plot to the movie, it takes place almost in real time, the hours between 10 pm and 12 am. There are several sets of people that end up at a flashy disco called "The Zoo", and there are little stories behind each one. There are two teen girls trying to win a dance contest, two working girls out looking to find someone they can stand, an older married couple out on their anniversary, and two average guys looking to hook up. Throw in some wanna be singer subplot, a hot funk band, a sleazy club owner and a wiseguy DJ and you have a movie. I suspect that this was really a chance to sell a soundtrack. RSO records had the biggest selling soundtrack in the world with the "Fever" collection. Neil Bogart, the guy that brought us Kiss with his start-up record company, must have eyed that success and thought to himself, "Casablanca Records" can do that too. I never owned the soundtrack to TGIF, but I'm sure they made a bundle. 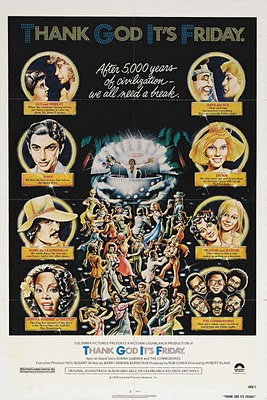 It is fun to see Jeff Goldblum and Debra Winger in this movie. Neither was well known at the time, and now both have probably faded from the public eye a bit. Goldblum has always been a favorite around our house because if JAWS is our crack, then Jurassic Park is our catnip. Here he plays the disco owner, who apparently sleeps with half the women in the club. His goal this evening is to score with the straight married woman in order to win a bet. Terri Nunn, who later was the lead singer for Berlin, is one of the teen girls. Donna Summer plays, guess what, an aspiring singer. She is actually very good but of course best when the music starts and she is behind the mike.

The whole vibe of the movie is loose. It simply wants to entertain for a couple of hours and sell some music. There is a nice dance number in the parking lot that looks like it must have been pretty athletic to do. I could have lived without the computer dating couple. There is a fair amount of drug use in the movie, which makes it all the more revealing that this is a 1970's film. The casual attitudes toward recreational drugs is reflected in a PG rating for the film. I don't think the rating is wrong, but I do see how the world has changed in some of it's attitudes. To me the best thing about the movie has always been that the reason the teen girls wanted to win the dance contest, was so they could buy Kiss tickets. Rock and Roll All Night you disco lovers.
Posted by Richard Kirkham at 12:36 PM