Conquest of the Planet of the Apes 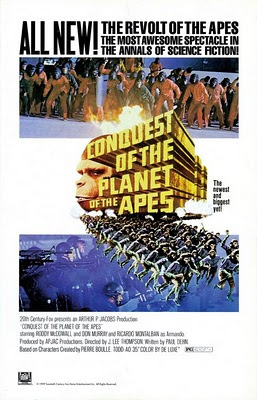 Today's film came out in 1972 and stars Roddy McDowall, Don Murray and Ricardo Montalban. It is the fourth in the Planet of the Apes series and was quite interesting. This was the first time I had seen the film and I was struck by several things while watching it. First off, it doesn't really feel like a Sci-Fi film. It feels more like a action/resistance film that just happens to have advanced apes as characters. The story is really about racism and slavery and I think both those themes are just as relevant today as they were back then. It is a little dated in that it's set in 1991 and it's a 1991 envisioned by filmmakers in the 70s but its message is just as important today. I was quite surprised at how well it communicated feelings of oppression and hate. I think the original Planet of the Apes has some racial undertones as well but they aren't nearly as pronounced as the ones in today's film.

Conquest is an interesting part of the Planet of the Apes series. It demonstrates why the apes overtook the world and it makes you sympathize with them. It works well both as an addition to such a great Science Fiction series and a social awareness film. The story of the series is continued and better explained and emotions are explored that must have been high around the time the film was made.
Another aspect of the film I found interesting was that it was kind of the connecting piece. Sort of like how Episode III was the film that explained why the story of the first three Star Wars films came about. Of course, neither is necessary for the originals to be great and make sense but it's nice to be given a back story and to see how the creators intended the story to be understood. Throughout the film, whenever the governor said something about protecting humans and ensuring that the prophecy of a planet run by apes didn't happen, I was reminded of a quote from Kung Fu Panda of all things. The quote is, "One often meets his destiny on the road he takes to avoid it." By repressing the apes and turning them into slaves, the humans only increase their resentment and will to fight. In trying to kill Caesar, the governor fuels his rage and encourages his idea for revolution. And, of course this will lead to the rise of apes and the downfall of humans. All in all, I thought it was a well made film that satisfied on multiple levels. A great addition to the series and the genre.
Posted by Richard Kirkham at 12:22 PM

You are doing a great job. keep it up and don't be shy about dissing something you don't like. I think I agree with you on most of the things you have done so far. Love Ya.--Daddo