Alright, one last Clint Eastwood picture before the end of the blog. Clint single handily kept the western alive in the 1970's. Sure there were occasional westerns, but just about every year for the entire decade, there was a Clint Eastwood Western. He started off the decade of the seventies with this Spaghetti Style western, shot not by Sergio Leone, who had made him a star in his man with no name trilogy, but by his American director of choice, Don Siegel. This movie was also shot in the U.S. and Mexico, not in Europe. It has most of the same atmosphere as the Spaghetti Westerns, but with stronger film stock and actors whose lip movement matches the words they are producing. It also has a score by Ennio Morricone, who did the Leone westerns and turns in a nice theme that is irritating because it gets in your head and stays there. Allison did not care much for the "simulated"mule brays that are part of the tune, but I think they are a very nice touch to distinguish this music from some of the other scores that Morricone wrote. 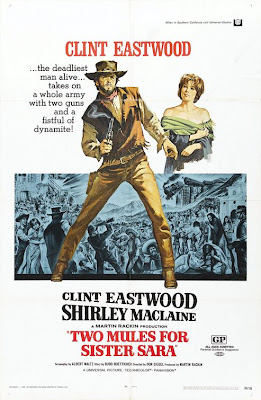 Shirley Maclaine, is still working,and at the time this movie came out, I think she was top billed. When I was eight or nine I had a little crush on the red-headed girl that lived on the corner, Barbara Duffy. I saw this movie when it came out and I was 12, Shirlee Maclaine is cute as can be and very sexy. I never dated a woman with red hair but if Dolores wanted to go all Shirley red, I wouldn't mind for a week or two. The opening scene is probably not supposed to be too sexy, after all the rotten cowboys are about to take advantage of the poor girl, but her red hair and fair skin being substantially exposed, is enough to imprint on a 12 year old. Her politics and personal life are not my cup of tea, but she is a terrific actress who has a very strong on screen persona. The match-up with Clint works very well. He has that steely eyed look, and she uses her pixie like demeanor to bring some warmth to a cowboy performance that would simply be an echo of earlier successes. His humor in the film is much more directed at sexuality issues than the violence that occurs.

For a mainstream, 1970 film, it is pretty violent. There is an execution scene in which the wall behind the prisoner is splattered with blood when the firing squad lets loose. In the big battle scene at the end there are several shots of the damage that might be done by a revolutionary wielding a machete. Although we do not see the human repercussions, this is another western from the time that uses the trope of attacking a train with dynamite. I must have seen that a dozen times in movies that came out from 1969 to 1976. Each film tries to give it a little bit of a twist, here it simply is a plot complication, rather than an integral part of the story. The most gruesome bit of business in the movie is the thing that I remembered best from seeing it the first time. Clint is shot with an arrow that does not come out the back. He has the Sister, carve a groove in the shaft, fill it with gunpowder and then as he lights the powder, she pounds the arrow through his shoulder and out the back. There was some tension, some humor and a little down home remedy all in this scene. 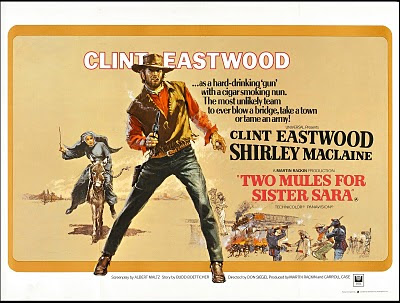 I saw this movie with my father in 1970. I am pretty sure it was just the two of us and I was probably the one who suggested the picture. I have a memory of it playing with a Gregory Peck film from the same period; either "The Chairman" or "Marooned". I know I saw both of them, but I can't quite remember which one was with this movie. I also think we saw this on the west side of L.A., maybe near Venice or the Airport. It isn't of critical importance, it is just a little detail that is in my head and seems to be accurate. As far as I know, my Dad liked the picture. I was doomed to be an Eastwood fan after this. I don't think I had seen any of his other movies before, so this is really my first memory of Clint. Probably not a bad bookend with Gran Torino, nearly forty years later.

These movies span the majority of my life, and they celebrate a transition in the way violence is portrayed. A western from the early days focused on the story, and violence was the tool of resolution for conflict. Today, a movie like Clint's last starring performance, shows that violence is the story and what the consequences of that violence can be. Not all the movies that are made these days are infantile views of the world designed just for audience gratification. I do however have to say that I like me a little instant gratification from time to time. Modern revenge stories have replaced the western for the cathartic use of violence, but it is fun to go back and see how they did it in the old days of the cinema. Thanks Clint Eastwood, you have entertained me my entire life and your absence from the screen is a bitter pill that I have to swallow. Gene Hackman, Sean Connery, and Clint Eastwood have all retired from on-screen acting roles, and my world is a lot sadder for it.
Posted by Richard Kirkham at 9:39 PM