The Sexiest Movie Ever! 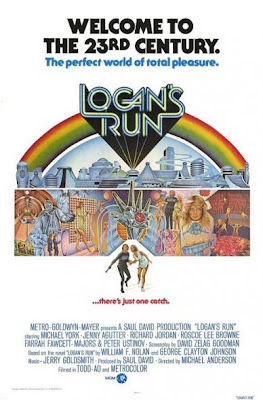 It's Amanda again. Today's movie is another Michael York film, Logan's Run. It was released in 1976 and also stars Jenny Agutter and Richard Jordan. I hadn't seen this in a while and didn't remember all of it so it was fun to watch again and see things as if they were new.
Now, I see a common theme start to appear in the films for this week. No, not that all of them will star Michael York. The theme I see is a comparison to Star Wars and advances in special effects. This film came out just one year before Star Wars and the effects are very pale in comparison. The miniatures are incredibly obvious and the sets look cheap. I'm sorry to be so critical but one of the things I look for in a movie is its ability to stand up over time. Though the story is great and Michael York and Jenny Agutter very sexy, the sets, costumes, special effects and concept are indicative of the time in which the film was made. I even made Angelique watch a scene in order to show her the outrageous costumes they had, specifically the one Agutter wears in her first scene that is basically a long poncho held together with a belt, and she commented that it "looked like a 70s' film." Not to say that that's necessarily a bad thing but that it will always be hindered by that aspect. As with yesterday's film, the story is simple but strong and the production value a little low, especially when considering the film that was to follow the next year. 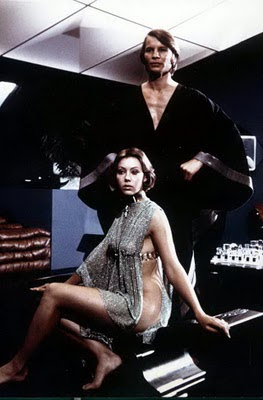 Logan's Run is a classic Sci-Fi film with its post-apocalyptic Utopian world, where people are young and beautiful and sexually robust, the only drawback is that you die at 30. I think it must have been one of the last to use this sort of formula before filmmakers moved to the bright and colorful world of computer graphics and intense special effects. A good story can make a movie great but production and film style can trap it within a particular time period or genre. Logan's Run is a good story but the film is trapped within its time period because of its production and style. It is, as I said earlier, a classic Sci-Fi film and even a classic film of the 70s but it "looks like a 70s' film" so it will always be seen a "70s''" film. The story may be adaptable (and it looks like it might be done in 2012) but the film will remain of its era.
Posted by Richard Kirkham at 9:44 PM