This was a series of movies that actually made sense to develop. There is a pattern implied by the concept that should draw us in. Once the first movie is done, it makes perfect sense that there would be followups. The first two films both opened in summer, and I saw both of them with at least one of the same people. So I have decided that for something different in the blog, I will post about the first movie today and make the sequel the subject of tomorrow's movie a day posting. The third movie falls out of the parameters of the blog and I never saw the fourth. So tonight let us proceed with "The Omen". 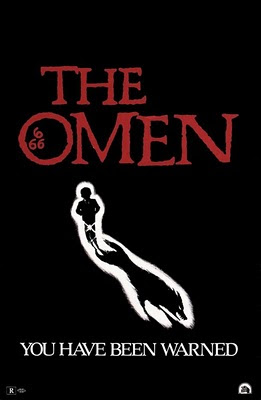 It is odd that Gregory Peck was past his prime as a movie star when I was seeing the movies I'm doing in this blog. I remember seeing him in movies as a kid and always thought of him as a relatively vital actor. By the time the seventies were on the down side, he was not really a box office draw. He was still a star but did not command the place in the food chain that he'd had in the 1960s. The Omen changed that. This was a big box office success. The next year he starred in MacArthur, portraying the famous and controversial general. Right at the end of the decade he did "The Boys From Brazil" another big box office hit, but by that point the star of the movies he was in was the concept. He added plenty but the studios were probably right in thinking it was the idea that was bringing people in. So although The Omen was a hit, five years later he began a slide from high profile movie star to elder statesmen of the film industry.

I do think he contributed a lot to the Omen, you need his dignity and gravitas to believe in a story about the spawn of Satan being groomed to take over the wealthy family name and pursue starting Armageddon. The movie is also helped by a slow build up with some strong sustained scenes as well as just the shock value. For instance, the sequence at the animal park begins innocuously enough, with Mom Lee Remick buying the little boy some ice cream. Something seems to disturb the giraffes, but it is not frightening, just a little creepy. By the time the baboons show up however, we are a ready for some bigger frights and they start coming. A lot of people seem to remember the creative deaths found in the series, and there are two or three in this first one, but it really is the second film that goes into high gear trying to juice us with unusual death scenarios. There are at least two big screams in the film, as well as another strong suspense scene set in a creepy Italian cemetery.

An earlier post mentioned my love of Jerry Goldsmith as a composer. He is the only celebrity I ever wrote a fan letter to. After I saw Gremlins in 1984, I had to let him know how much I admired his versatility and the compositions. The Omen is one of his masterpieces. He was nominated more then a dozen times for Academy Awards, this movie is his only win. The music is quite innovative, It uses chants and discordant combination of notes. I saw a video clip in which he mentioned how much Richard Donner the director of the Omen, admired the simplicity of the main theme from JAWS. Goldsmith acknowledges that one sequence he scored in the film tries to do the same thing as John Williams famous score. He succeeds admirably in the scene that builds up to Damien having a fit about going into a church. 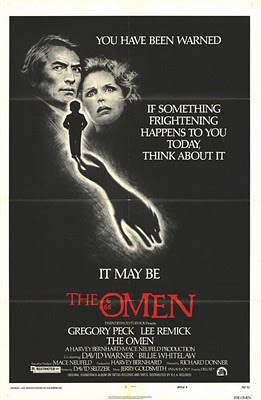 The summer of 1976 was a busy one, but my freshman year at U.S.C. I made a pretty good friend in Jon Cassanelli. He would have a tough life after we got out of school, and the story of his death is a little too depressing to discuss here, but he was vital and energetic during our college years. He was dating his debate partner Gleam Davis that year, and I went with the two of them to see this movie at the Egyptian Theater in Hollywood. (As I think about it, it may have been a theater that was located where Ripley's Believe it or Not is now located,just a couple doors down from the Egyptian but I can't recall the name). The theater was packed and people ate this movie up. I especially remember how all the women screamed at the last shot of our smiling star. I later saw the film with Dee, and she pretty much had the same reaction. The Omen is a suspense style horror film, tomorrow, when we look at Omen Two, the suspense shifts quite a bit to graphic horror, but it is still plenty disturbing.
Posted by Richard Kirkham at 11:27 PM