Most films with a dystopian theme follow an action based plot. The list of such films is a long one, from "Planet of the Apes" to "The Hunger Games", the central figures in these stories confront a world that is vastly different than our own and they fight against it in some way. "The Giver" has the same concept but there is a very different plotline and purpose. In "The Hunger Games" the focus is on a competition and most of the second half involves a battle to the death with high amounts of tension. "Logan's Run" is a chase movie that switches the role of the purser to that of the pursued. There are a few action beats in "The Giver" and there is a chase, but all of that takes place near the end of the picture and it is an attempt to resolve the quandary faced by the society, it is not really the reason the picture exists. This story is about an idea. It asks us to consider questions of morality and face the issue of what it means to be free.

Freedom from want, from pain, from loss are all appealing utopian principles. The notion that everyone would be treated equitably and that the inconvenience of life changing decision making would be out of our hands might seem a good one. Who would not want to live in a world where all are treated politely and they have their needs provided for them? The trouble with all utopian visions is that they come at a cost and that cost is likely to be unacceptable when viewed from a different angle. Brenton Thwaites is a young Australian actor who has the lead role in the story. He is Jonas, a newly minted eighteen year old who is given a special job in the community that he lives in. This position is a once in a generation role that requires a great deal of strength to handle. The information that he will be responsible for is critical to the society that he lives in but it is also potentially devastating. Jonas will be trained in his role by a counterpart, an elder of the community who has held the position that he is embarking on. The title role is played by Jeff Bridges.

Between the two actors, there has to be an effective bond to make the emotions of the story resonate. Thwaites is eager and innocent, Bridges is tired and emotionally burned out. When we buy into the concept of the story, it is easy to understand the two roles. The nearly exhausted candle needs to be replaced with a fresher, more sturdy model. The difficulty comes in whether or not we should even keep functioning under this system. As Jonas learns more, sees more and feels more about the world that preceded the community he lives in, he questions the sacrifice that his world has made to have the bucolic existence it enjoys. The pain of discovering his "fathers" true role in the society and the complete lack of moral awareness that Jonas himself now has becomes the trigger for the climax of the film. Before all of this happens however, a long series of possibilities, missed opportunities and dysfunctional living conditions has to be revealed.

Phillipe Noyce is the director of this film. I first knew who he was from the 1989 thriller "Dead Calm". He directed the Harrison Ford versions of the Tom Clancy stories. He has been an effective story teller but not a particularly distinctive visualist. With this movie I think he has stepped outside of his comfort zone and created a strong visual style to accompany the storyline. This movie borrows from "Pleasantville" in a pretty direct way but not in a manner that seems cheap or obvious. The black and white cinematography that dominates the majority of the story is subdued. You might not even realize the film is in black and white until small pieces of color start to intrude. Although it is a Science Fiction story with a fully realized alternative universe, the special effects and set design are also subtle, which makes the film feel more like a story about ideas than an action film.

Meryl Streep is the Chief Elder of the community. She might be seen as the villain but she is simply playing the role her character has in the community. None of the members of the community except fore The Giver and Jonas, have any conception of how the world they live in is twisted. Jonas manages to connect in an emotional way with two friends. Those two friends become important to the plot as they are given the chance to peek behind the communities protective skirts and at least vaguely perceive some of the emptiness that their lives have. Alexander Skarsgard and Katie Holmes are Jonas parents. They have a concerned and supportive attitude toward Jonas but the real emotions that a parent might be expected to have are effectively masked by the role relationship they are expected to play in the community. Even toward the climax, the conflict between Jonas and the world he lives in is not a personalized one but rather one of ideas. The only time the film falls more into the action style conflict cliche is when The Giver and The Elders at the end are participating in a ritual to "release" Jonas romantic interest from the community. The Giver seems to be arguing and resiting in a courtroom style setting, even though that is not the purpose of the scene. 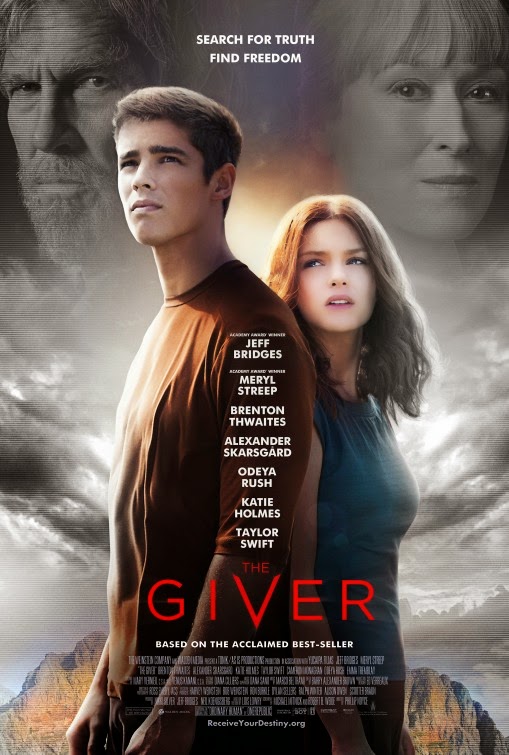 Singer Taylor Swift has a brief role in the film and it provides some context to why The Giver himself feels that a change in the order of things is needed. This is a thought provoking story that was a young adult novel from twenty years ago. The book has been used in thousands of classes since then and the story may seem old hat to the current generation but I never read it and it was refreshing and very inspiring. My expectations for the film were moderate but the execution and the story make this one of the films from the summer that deserve to be remembered past the opening weekend.
Posted by Richard Kirkham at 1:09 PM