For every "Blood Simple", "Fargo", or "No Country for Old Men" that the Coen Brothers have produced, there is a lighter, funnier or more preposterous film on the other end of the spectrum. While "Fargo" has humor, I think you would be hard pressed to call it a comedy. "The Big Lebowski" does have a kidnapping plot also, but no one would mistake this for a drama. Somewhere between the slightly overlooked release of the film in 1998 and it's 15th anniversary last year it became a cult classic. It is beloved by aficionados of the Coen Brothers and former fans of Cheech and Chong everywhere. The hero is a burnout, lazy, not particularly clear stoner, which makes him perfect for the Gen X audience that was coming of age at the time. 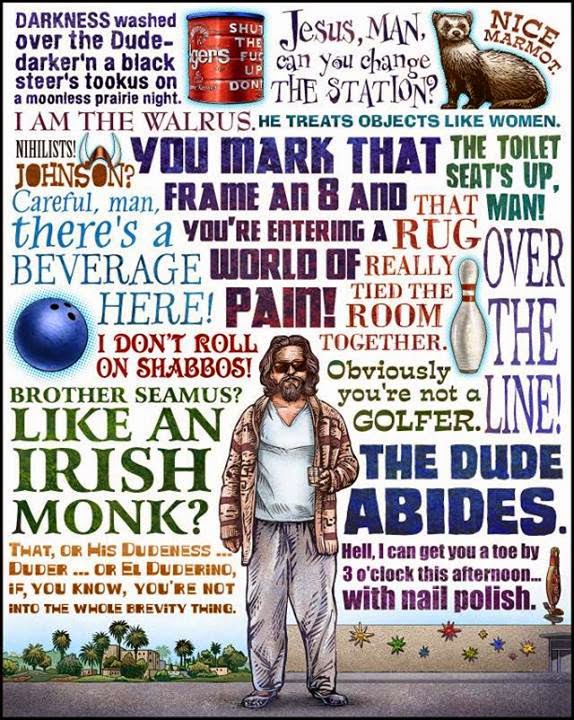 This is in a close race with "Raising Arizona" and "Burn After Reading" as the most comedic pictures they have made. I personally have laughed at more things in Lebowski, but the laughs have been harder, and more guttural in those other two movies. This does have a significant advantage over the other two if you are going to do a ranking; the two co-stars. Jeff Bridges and John Goodman give epic performances in this film and they will almost certainly remain the iconic images that people will remember of these two stars careers. All you have to do is search Facebook for examples of memes that feature the two of them and your dance card will be full.

This is a shaggy dog story that chases it's tail but never seems to matter what really happens. As is often said of film detective stories and comedies, it is the journey that matters rather than the destination. This journey covers a lot of territory in Southern California without really showing any of the topography. We get a sense of Malibu and Pasadena more from the characters that we meet who inhabit those places than from seeing the view. The mansion of The Big Lebowski reflects what would pass as old money here in So. Cal. and Jackie Trehorn's glass walled mansion looks like the kind of nouveau riche palace that a pornographer like Larry Flynnt would think is classy in the beach community. There are old school bowling alleys and suburban tract houses that serve as centers for the characters to interact in. So unlike other films that feature the Southland, "The Big Lebowski" uses sets and character to parody life in the City of Angels. As the Stanger who narrates the movie puts it, " But I'll tell you what - after seeing Los Angeles, and this here story I'm about to unfold, well, I guess I seen somethin' every bit as stupefyin' as you'd see in any of them other places. And in English, too. So I can die with a smile on my face, without feelin' like the good Lord gypped me." You'll feel that way too, even though the movie is not a travelogue.

Strange characters come out of the woodwork in this movie. Some of those characters never speak, some of them speak in broken English and some of them just have to piss on the carpet. Phillip Seymour Hoffman vamps it up in a role that preceded his stardom but marked a rich period of character work that he did in the late 90s. David Huddleston will now have this as the headline for his obituary instead of "Santa Claus". Julienne Moore, Steve Buscemi, John Turturro, Tara Reid, Ben Gazzara and many others could proudly point to their participation in this movie and be invited to conventions for ever. Finally, the man with the most amazing mustache in Hollywood, Sam Elliot, gets to use his sonorous voice in a whimsical way and ride off into the sunset as a mystery figure who shared this amazing tale.  The work of these character actors and a half dozen others marks one of the richest casts in a modern film that I can think of. All of their collective work would be wasted if we did not get the greatest performance of John Goodman's career and the laconic grace that is Jeff Bridges.

IMDB lists 166 separate quotes from the movie. In a film that is only 117 minutes long, that means the movie had an average of almost 1.5 quotable lines a minute.  From a statistical point of view, if you added in the number of Dudes" and "mans" said in the course of the film and then divided by the total uses of some variation of the "F" word, you will find that there is dialogue poetry as a result. It is one of the joys of movies that music which pre-existed the movie can be re-purposed to fit a story that seems made for that music. This film is an example of that minor miracle as well. My friend Michael has a summer series that he is posting "Purely Because of a Movie" where he spotlights songs on his ipod that are there because of a film he saw. I will be happy to mention a few from this movie that would make my list; Kenny Rogers and the First Edition"Just Dropped In" in the Pop song category, "Requiem in D Minor" by Mozart in the classical category and "Hotel California" by the Gypsy Kings in the selections not in English. There are a dozen other worthy entries as well, but "Tumblin Tumbleweeds" was in my catalog of music long before this film came along.

So this is a first class comedy, by the remarkable talents of the Coen Brothers, featuring a great cast and two excellent lead performances. There are plenty of music tidbits to keep you intrigued and the movie is almost entirely quotable. Of course as Jeff "The Dude" Lebowski would put it... 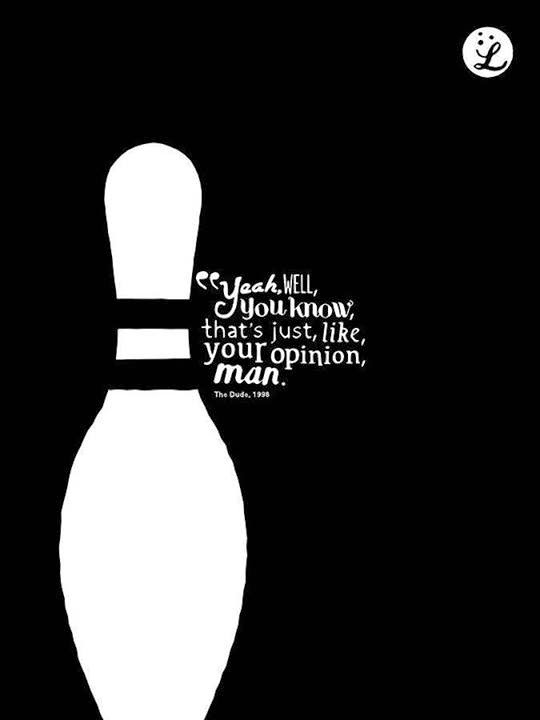 Posted by Richard Kirkham at 12:12 AM

For me, the best way to look at The Big Lebowski is to view it as a neo-noir. It works as film noir perfectly, because it really is one. It just happens to be screamingly funny at almost every moment.

Without a femme fatale or a murder, it is a stretch as a noir in it's pure sense, but in it's nonsense it fits anyway.

"Has the whole world gone crazy? Am I the only one around here who gives a shit about the rules?"

You're right that there's no murder, but there's at least an alleged kidnapping and a great deal of crime. And while there's not a pure femme fatale, both Maude and Bunny have some aspects of the character type. Both are overtly sexual and neither one is particularly trustworthy. Both are also manipulative.

I'm betting that if they were asked in an interview, the Coens would say that this was intended as a comedic take on the style.

It certainly gives the phrase Bogarting the joint, a new appropriate meaning.