If you don't hear the music playing in the trailer above and feel obligated to see the movie because your feet are dancing and your bootie is moving, than you should stay away. This movie has a lot of things going for it, and it could be artistically sound on a dozen different levels, but the main reason to want to see it is the sound of Mr. James Brown. If that sound does not reach you, stay home or go see some superhero movie that no one else cares about or sit and watch bad comedians try to act. The rest of us, yeah even the squares who have no rhythm and almost no soul, will be at the theater seeing and mostly listening to this entertaining biopic that gets all the music moments right.

This is a tough review for me to write because I loved the movie, but I'm not sure how good it is. There are bits and pieces of the drama that are told extremely well, there are musical sequences that are recreated flawlessly and there is a central performance that will stun you. All that said, it does have some of the drawbacks that all biopics have. It feels like it is trying to hit all the key moments of the subjects life, and it rarely has time to think about those moments. There are dramatic scenes in the film that show us the problems of our subject but then are ignored for the rest of the story. Side characters can be interesting, but they are not allowed to distract us too long from the star and that means that everything has to be carried bu that central performance.

Chadwick Boseman has the shoulders to carry this story on. Last year in "42", he played Jackie Robinson with dignity and subtlety. There is nothing subtle about Mr. James Brown, and Boseman plays him perfectly. Brown was an opinionated workaholic, a self aggrandizing braggart, and a showman with vision. Boseman gets Brown's mannerisms down exactly, his dance steps and charisma on stage are re-enacted with verve and precision. As the story went on, the more I felt like I was watching James Brown and the less it seemed that an actor was simply channeling him. Those of you who are interested in early Movie Award predictions, can pencil in Chadwick Boseman, as an early contender in the acting categories. The audacity of trying to imitate James Brown is only exceeded by the brilliance of the actor who managed to accomplish it. This performance is not simply costuming and makeup, this is a full bodied physical performance that really should be seen on the big screen to get the best effect.

Most biographical films try to tell their stories in as creative a manner as possible. In "DeLovely" from a few years ago, we are watching the Cole Porter story as told from heaven by the deceased. "Walk the Line" is bookended by a concert appearance at a prison. Most modern films try to avoid the Hollywood approach of the golden age, a straight narrative told chronologically. "Get On Up", is structured as a random series of flashbacks and flash forwards. It helps to freshen the musical highlights and lessen the drudgery of a well worn story path, but it robs the story of much emotional investment. Brown's friend and apparent savior from early prison, is Bobby Byrd, who walks out with the rest of the "Famous Flames" when James Brown is picked out as the star by the music industry, but in a very fast followup is playing the part of his foil on-stage a couple years later. We have no idea how Brown managed to overcome the alienation he created or if Byrd was just so desperate he overlooked the slight. Admittedly there are random insights on why the other characters act as they do and how James Brown interacted with them at those critical times but there are big blank spaces as a result. A similar story is played out with the Mother who abandoned him, denied him and then embraced him only to be rejected by him. After the incident where she shows up backstage at the Apollo, we never hear or see another word about their relationship. The effect is like looking though someone's photo album but leafing through the pages randomly. It may be interesting but it does not create the kind of narrative that most of us would like. 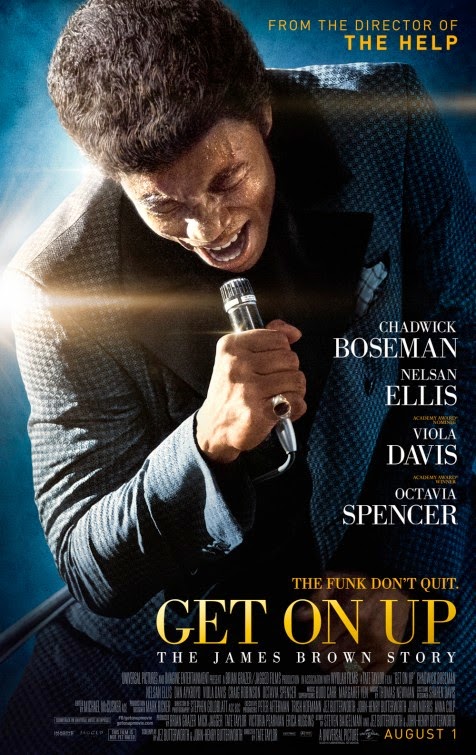 In the end, not much of that mattered to me because I was seeing a fantastic performance while listening to some great music. The incidents are punctuated with humor and drama in plenty of spots, but those never manage to pull us closer to the subject. We have only the vaguest sense of what his family life might have been like, with nine acknowledged children and at least three ex-wives (and maybe more) showing up after his death. He was opinionated and inconsistent on those opinions, we can see that in the film, what we don't always know is what it all meant. His cultural awareness and importance to black pride is shown, but his openness to other musicians and political figures outside of the expected cultural norm is not explored.  The film gives us an incomplete story but it will leave you with a clear understanding of the person that James Brown was. Oh yeah, you will also get the closest thing to a James Brown concert possible this side of old video/film clips from the 60s. That's reason enough to get on up and see this.

Posted by Richard Kirkham at 4:41 PM

Very nice review and like you (as you read) I didn't like the way it was told out of order, it did rob the movie of its emotional impact. Still....that performance alone is reason enough to see it!

Glad you made it by. The narrative is just off enough to make the experience less than it should be but the performance compensates from my point of view. Thanks for the comment.