For the second time this summer, the focus of a movie is on food and the Chefs that make it so appealing and interesting. Much like the film "Chef", earlier this summer, "The Hundred-Foot Journey focuses on the potential of a chef if only his ambitions can be met halfway. In this case, a family that has taken refuge from violence at home is the source of transition. The limitations imposed on the young cook are sometimes self imposed and sometimes a result of the situation the family finds itself in. There are also multiple romantic stories being told and some cross cultural tension that have to be overcome before the stories can resolve themselves.

Manish Dayal plays Hassan, the second son of an Indian family with a long tradition of cooking. From the time he was a young boy, he learned at his Mother's table the secrets of good food. Everyone knew from an early age that he had a special gift for food. As a young man, he and the rest of his family, including older and younger siblings, are lead by their father to Europe to start a new life and a new restaurant. The young star of the film is required to be confident in some scenes and uncertain in others. The romantic relationship parallels the gastronomical relationship. Marguerite, the sous chef in training who comes to the families rescue when they initially land in the small French town they make their home, becomes a foil for his pursuit of culinary greatness. The best romantic scene in the movie involves Hassan attempting to woo her with his preparation of the five sauces that are the building blocks of French cuisine. As she samples each, the expression on her face and the anticipation in his eyes strongly suggests an exchange of kisses that each leads to a more passionate engagement with the partner. Whenever someone suggests that food and eating is a metaphor for sexual longing in a story, this will be a moment that will pop into my head.

While the young couple are the center of the story, the engine driving this vehicle is Helen Mirren. As Madam Mallory, Mirren begins the relationship looking down her nose at the immigrants and the foods they bring with them. As the owner of a highly rated restaurant merely a hundred feet across the street (hence the title) she is standoffish, antagonistic and outright devious in her quest to bring the "Masion Mumbai" to an end.For a character that has a minimal amount of dialogue in the picture, she has the biggest impact on the story. Mirren can convey so much with her face through an arched eyebrow to a blank stare or pursed lips, she often needs no words.It is her obstinance that must be overcome, well his Father too presents an obstacle. Each of the older characters have reasons for wanting to hold Hassan back at first and ultimately each wants the young prodigy to soar as well. Indian Actor Om Puri has his biggest English language film role in this picture, and it is his success at matching Dame Helen that allows the story to crackle as much as it does.

Nothing is going to happen in the story that you could not predict from seeing the trailer or hearing the set up. This is not a film based on surprise but rather one designed to meet our expectations in the most pleasurable ways possible. Lasse Hallstrom has been a director I've enjoyed since "My Life as a Dog" way back in 1985. I've not seen all of his films but I do admire the ones that I have seen. His light touch with "Chocolat" was just right and the tone and look that he put together for "The Cider House Rules" was one of the few successful adaptions of a John Irving story. This middle brow film is made more effective and more beautiful by the choices he brings to it. Maybe the fantasy of the French countryside is a little extreme but who would not want to fall in love with a beautiful part of the world? People have struggled in movies for years to make computer programming look interesting on screen, but it appears that cooking on screen comes so naturally that it is hard to screw it up. Hallstrom never lingers over the food shots for longer than it takes to tell the story or allow us to imagine what the characters are feeling. The back and forth editing of the food preparation process of the two restaurants does create some nice tension and energy over the issue of food. The actors also do not overdo the confrontation scenes or the romantic moments, they are kept in tasteful check and the audience's understanding of the situation is allowed to fill in the blank spaces. 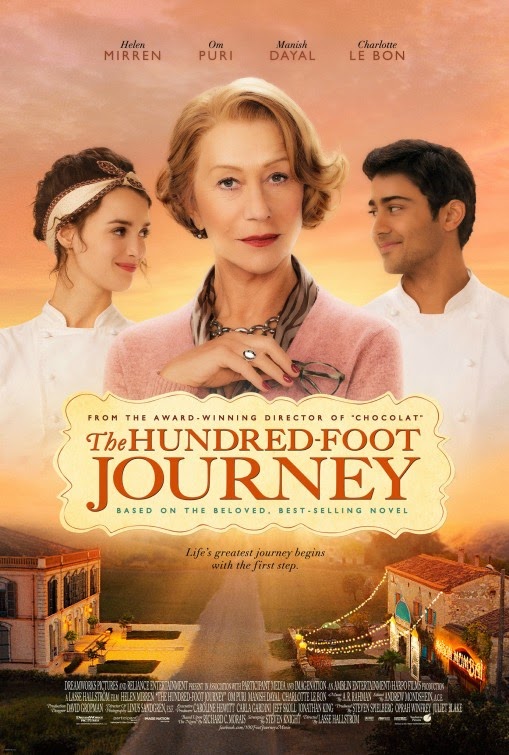 The vast majority of audiences who see this picture will be like me, they will appreciate food but not to the degree that the characters in this film do. The relationship of taste, smells and tactile experiences will be conveyed but we are all going to need to use our imagination. Food criticism, like literary or film criticism, exists on different levels. Some of us are hackers, like me, who can see excellence but not always write in it's language. Others are experts who not only savior, analyze and enlighten but also raise our expectations. The story might be something even a journeyman can see and explain, but the talent to award a Michelin star for food is well beyond my ability to distinguish, but it is now something I can more clearly understand.