Daniel Radcliffe is the sad but wiseacre Wallace and Zoe Kazan is the cute as a button but unavailable Chantry in this whimsical romantic comedy adapted from a stage play named "Toothpaste and Cigars". This is a sort of "When Harry Met Sally" for the millennials. The question being, can a man and a woman be friends without the romantic complications? Since this is a romantic comedy the answer is inevitably no, butgetting to that answer is what makes the movie interesting.

The biggest weakness of the movie as a story is also it's biggest strength. The dialogue is laden with quick witted quips, references to poetry and literature and rapid fire verbal exchanges. In real life no one talks this way. Yes, people are funny, but they are not that consistently funny for an entire evening much less the whole of the relationship. It sometimes sounds like an extended sitcom with very clever writers having a great time putting funny words in the mouths of their characters. Listening to it can be charming but it will never pass the smell test when it comes to sincerity and honesty. If you wanted that though, you would just stay at home and have a conversation with your spouse, lover or friends. We go to the movies to be entertained  (at least for the most part) and we want the characters to sound interesting as they speak. These characters sound interesting. They say amusing things and say them in interesting ways. There is one quick scene where the two are playing ping pong and the path of the ball and it's velocity is not as sharp or quick as the exchanges between the two leads.

Wallace is one year out of a serious relationship break up that forced him to drop out of medical school. Chantry is in a five year live in relationship with Ben, a man she really does love. They meet at Allan's party, she is his cousin and he was the college room mate. They hit it off immediately and the level of attraction between them is visible on screen. The two actors are awkward, nice looking and they play the uncomfortable moments extremely well. Chantry finally accepts that maybe she and Wallace can be friends and gives him her number. He is more realistic and thinks that it would be wrong to pursue a relationship with her when she is involved with someone else. However, after a second cute meet sequence they toss caution to the wind and decide to be friends. When Wallace comes over to have dinner with her and Ben and her sister Dalia, things go hysterically wrong in one of the most amusing bits of slapstick I've seen this year.

The path the two take for the rest of the movie is pretty standard but it is littered with brilliant conversation. Allan counsels Wallace on his options and the paraphrasing of all the advice is too the point and funny. A secondary relationship between Allan and Nicole, a girl he met at the same party as earlier feels a lot like the Carrie Fisher/Bruno Kirby relationship in "When Harry Met Sally". They want Wallace to get off the stick and go for it with Chantry. Meanwhile, Chantry has to dissuade her girlfriends and sister from pursuing Wallace too strongly.  The mixed motives are part of the fun but also part of the cliche. Completely separate from all of this is the living situation Wallace is in, staying in his single sister's house and being something of a male role model for her eight year old son. When Wallace baby sits during his sister's date, he and his nephew do the exact opposite of what she told him to do, that includes watching the great "John Carpenter's: The Thing". Any movie that has that as a reference and also has the balls to use "The Princess Bride" in the way it is used here has something going for it. 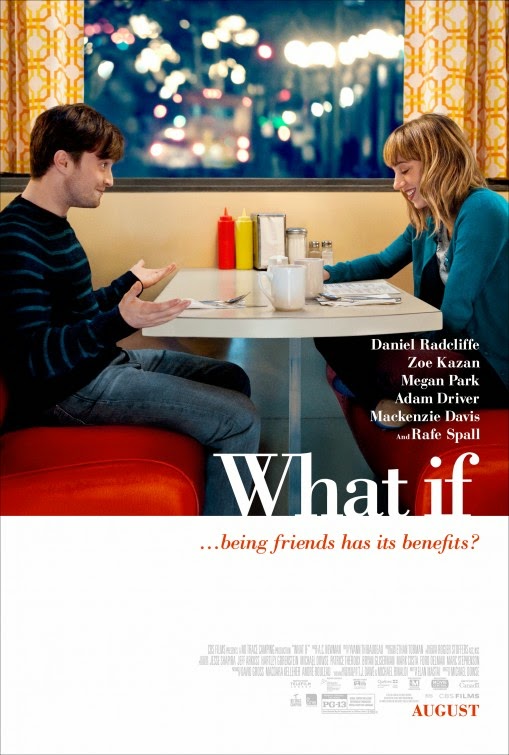 All of the actors do a great job and the movie looks nice. There is a soundtrack filled with contemporary music that seems to be standard for modern love stories. There are plenty of laughs and you will discover an actress that is unconventionally pretty and should have big things in store for her. Radcliffe shows that he is not just the boy who lived but can be a romantic lead in the quirky off center way that most romances now take. They have not reinvented the wheel here, they have just managed to make go around one more time quite pleasantly. You probably won't remember much about the movie but you will enjoy the hundred minutes yo spent watching it.

Posted by Richard Kirkham at 7:12 PM