Two reactions are typical when talking about an "Expendables" movie; "Damn is that awesome" or "Damn is that Pathetic". I happen to fall into the former category, so if you fit into the later, you can pretty much skip this, it is not going to fit your world view. Aging action stars plus plenty of shootouts plus bad jokes equals two hours of fun in August as far as I've gone with these flicks. There is not any real artistry, the plots are boiler plate and the outcome is inevitable. These are comfort food for people who miss Bob's Big Boy and Hair Metal. Sometimes there is a nice new element to make the movie interesting and to keep us coming back. This movie has three or four of those elements.

I rarely spend more than a sentence or two describing plot in any of my reviews, I don't like spoilers. With a movie like this, it is even simpler because the plot is so direct. The team must take down a rogue former member who has turned evil arms dealer. That's it. Sure more happens and there are some justifications for jumping into a new set of recruits and bringing the old crew back, but it is straight get the bad guy stuff. What does help is that the bad guy this time is Mel Gibson. With all the baggage he has accumulated in the last few years, he has not been a regular screen presence. That's too bad because he is quite good and charismatic on screen, whether playing a hero or the baddie. The three Expendable movies have been slowly creeping up in the quality of the antagonist. Eric Roberts in the first film was fine but did not get much development. Jean- Claude Van Damme was more successful because his showdown with Stallone is the epic climax of the movie. Gibson gives the movie a sense of credibility it would not otherwise deserve and his dialogues with the team contain the right kind of ominous threat to keep our expectations high.

Also joining the cast and classing up the franchise is Harrison Ford.  In the 80s, Stallone and Schwarzenegger were the brawn of action movies. They were the guys who kicked butt. Gibson and Ford were the brains of action movies. Their films had plot twists and sophistication and did not rely on brute strength to get the mission accomplished. Ford shows up as the replacement for Bruce Willis's character in the movie. He treats the script with more seriousness than anyone would think is possible and raises the bar on the believability scale. In the long run it may be a futile effort, but it doesn't end up like it is just stunt casting, even though there is an amusing line about what became of Agent Church.

The unique part of this film is the recruitment of a younger generation of Expendables whose loss  Barney will not feel as much. The selection process involves another old friend, Kelsey Grammer. Channeling a rougher version of Frasier Crane, Grammer gets in some funny lines and a little bit of pop psychology to go with all the nonsense. Stealing the show by playing the dangerous buffoon is Antonio Banderas. Having watched "Desperado" just a day ago, I can say his action bonafides are in order. His comedy chops from "Puss in Boots" appear to be in good working shape as well. Four other young actors are tossed in, it would seem with the intention of carrying on the series when it will look too odd to have grandad diving through a window with a Howitzer under his arm. Wesley Snipes is introduced as another former colleague who has been away from the action scene for a while. The main justification for his presence is the joke about what he was doing prison time for in the third world country the team breaks him out of. 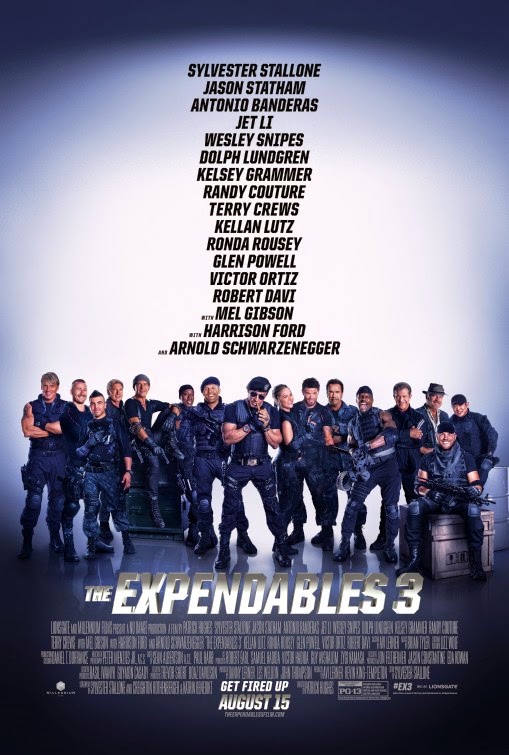 I understand that someone might say they were tired of the same old, same old. If you seek creativity and innovation in your action film, move along, there is nothing for you here. Those of us who do not mind a lot of the familiar and enjoy a big chunk of cheese with our weekend fix of adrenaline, will appreciate the continuing adventures of the old timers. Yeah they look a little long in the tooth, but they also look like they could take most of us out in twenty seconds or less. Until they reach my level of physical prowess, I'm still willing to go along for the ride.

What The Expendables 3 lacks is the kind of exuberant pizzazz which made these particular performers ripe for rediscovery in the first place.
top voted SEO Austin Don Allen information

That's one way of saying it. Some days after Sixty, it is hard to be exuberant.