I made a joke in class the other day that the only reason any guy ever goes to see a Sandra Bullock movie is because he has a wife or a girlfriend. Sandy is the Queen of romance in the last fifteen years. When Meg Ryan dumped Dennis Quaid and got her face messed up, the crown was picked up by Miss Bullock and has never been put down since. The joke is funny as long as we ignore "The Blind Side" and "Crash". This movie wants to be an action film with comedy, but in truth it is another romance. Like all of the recent guy bonding films may be referred to as "Bro-mances", this can legitimately he called a "Ho-mance". Sandra is bonding with another woman, and that is the real focus of the movie.

Melissa McCarthey was described in a post I read on line as the female Zack Galifinakis. She was seen as odd and irritating. Despite that comparison, and her presence as a love interest for Galifinakis in "The Hangover III", I think she is much closer to a Chris Farley type. She is a bull in a china shop, but ultimately she has a heart of gold. She is the driving force in the movie and it is her humor that makes this movie work despite it's by the numbers plot. She sells the tough gal character pretty well and the foul mouthed insults are creative enough that when you are laughing at them, they actually sound like something a clever person might say rather than words that a screenwriter forced from her lips.

This is a buddy cop picture with a mismatched pair of protagonists. Bullock is channeling her character from "Miss Congeniality", but it works and in the end her story arc seems credible enough. McCarthey drags her along for the rough humor and plays against her more timid side pretty well. There are some plot lines that are tossed in that go nowhere and are clearly designed to give McCarthey's character some street smarts and Bullock's character some sympathy. None of that is needed because the dialogue is what makes this funny as well as a couple of visual jokes. I got a big laugh from the tracheotomy scene and then the visual of one of the villains turning an earlier interrogation scene around was also amusing. This movie earns it's R rating honestly, there are enough f-bombs to satisfy and Scarface fan who ends up in the audience.

The humor is also visual at times and it mostly grows out of the characters. There is a sequence that will get some big laughs that is completely contrived, just to give the girls a chance to act out when drunk. It does not really fit with the rest of the movie but it did have some bits in it that will get some big chuckles. It's not quite as hysterical as it wants to be but it is generally very satisfying. There was a surprising amount of violence and sometimes the tone of the movie switches a bit too abruptly. I could have used a little more of Jane Curtain, she has one funny visual bit and then the family scenes are so similar to the ones in "The Fighter" that you wonder how big a stereotype we must be dealing with in those Irish families in Boston. 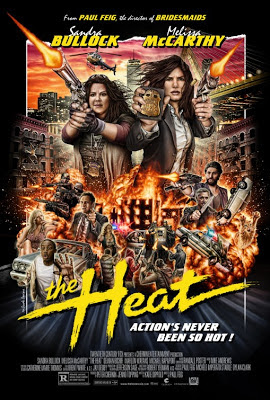 This is going to be a movie that is very successful and for which a sequel will be created very quickly. I don't need a sequel, but the characters were entertaining enough together that it seems like an easy reach and Hollywood is not going to pass up the low hanging fruit that this moneymaker is going to turn out to be. There isn't much to analyze here. It is a straight buddy cop action/comedy film. The two leads have a lot of appeal and there are enough jokes to sustain it. Your life will not be changed but you will laugh out loud a few times and you won't feel bad doing so.

Posted by Richard Kirkham at 9:55 PM

"
Melissa McCarthey was described in a post I read on line as the female Zack Galifinakis." Was that me? I think I recall comparing the two. :D

Yeah, there's nothing really too original about this movie, but it was a lot of fun.

I really liked that drunk scene! I thought it was hysterical... I totally bought into it!

It worked even though it doesn't fit. Looks like we are on the same page for this one.

I really enjoyed this. The chemistry, and the talent of these two, shine through. The script is nothing new or different in this 'buddy picture', but the women as characters get well-deserved laughs. My son and I were busting a gut on some these. You and Fogs nailed it.

Definitely nothing of a genre game changer, and incredibly formulaic. I know your review is quite neutral in what you really thought of it, which I think is a lot of the same feelings most of us "film writers" have towards the movie. Unfortunately, the general public isn't quite aware enough to know that it is, in fact, the same dribble we're hand fed every year.