So I am used to zombie movies that function in a slightly different way, that being said, this film works pretty darn well. There were stories about behind the scene problems and re-shoots on the movie. Originally this was to have been released last Christmas. The CGI Zombie attack clips on the walls surrounding Jerusalem seemed to undermine the idea of the film, making it look a little odd.. In the end those film clips make up a small portion of the movie and they work well enough to give us the idea of how a massive group of infected /dead people could suddenly be a threat rather than something to just be avoided. The script problems don't seem to have effected the tension level and the PG-13 rating is not as off putting for a horror action film as I thought it might be. This is definitely not a gore movie but it is a tight action film that provides plenty of suspense and enough creepiness to keep the average film goer satisfied for it's running time.

It is probably fortunate that I am unfamiliar with the source material. Everyone who has read it says it would be impossible to make as a single film, so clearly there has to be a simplification and an "inspired by" qualification of the movie. The zombies here are much like the infected humans in the "28 Days/28 Weeks" mode, they are Fast and Furious (although they don't steal cars or look like Vin Diesel, OK, some of them do). In most of the zombie films I've seen, the survivors try to hunker down and ride it out. They are subject to stress and fear and it is usually the internal strife that causes the drama in the film. Ultimately, they have to escape or fight and some live but most die. There never seems to be much hope for the world after the whole thing starts. In this story, we see the outbreak take over very rapidly. I still have some questions about how that could be the case when most of the incubation time takes a few minutes. I'm not sure who boarded all those zombies on flights, but I guess the airlines were desperate enough that as long as a person was ticketed they could get on a plane, in spite of wanting to bite everyone else in line.. TSA is once again shown not to be very effective. The logic aside, when the big cities start to see the spread of the infection and the rapid growth of the dead population it is pretty scary.

Brad Pitt is the hero of our story. He is a U.N. Health Specialist. It is never quite clear what his specialty is or why his assistance is so necessary that a special operation is arranged to save him and his family. The family set up is solid and the outbreak is handled smashingly well. The opening act of the movie pulls us in quickly and those other pesky questions seem irrelevant. There are three pretty effective chase sequences that feel very intense. The first one features a series of car crashes that are realistic, sudden and perfectly imaginable in the circumstances. Along the way, the family picks up a boy that they take on responsibility for as one of their own. All of this mostly moves to the background once the second act commences. The second act consists of a series of chases and attacks in a variety of situations. Some of them are simple and one of them is very elaborate. The influence Pitt's character has seems to be substantial even in the parts of the world that are cut off or over run. It does seem at times as if the story gives him cache when it is convenient and none when it suits the story for dramatic purpose. This is not a story of survivors holding out against the oncoming hordes, it is a globetrotting race against time and every stop features some new wrinkle to the plot. 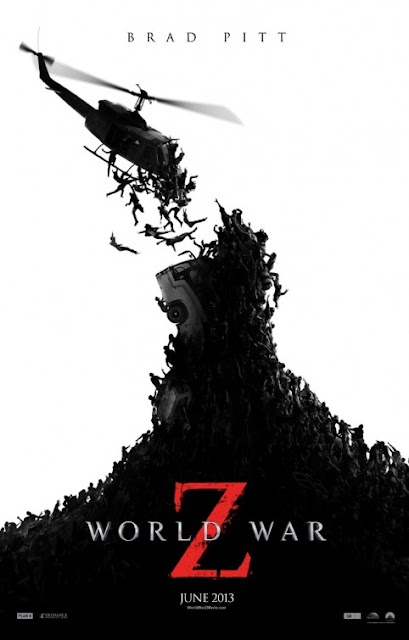 As you may have noticed, there are a lot of chases and escapes and attacks. It may seem a bit repetitive after a while. Each one is staged differently so they don't seem too recycled, but there is only so much you can draw out of the concept.  The attack on the plane was one of the most innovative and the result does stretch credulity quite a bit. Still it gets us to the third act where we begin to see some plot ideas from earlier in the movie begin to gel. The film seems set up to allow the story to continue, so don't be too surprised that the zombies are not wiped out and a cure does not seem likely. The trick here is a little bit different and I thought it made the movie work a little better in the end. The action in this act is a lot more direct and visible since it is contained in a well lit location and we have clear objectives that are being pursued. If this was the section of material that had to be re-written, then they did a solid job making it work in terms of drama and action.

Pitt was the only recognizable actor in the cast so that must be where the money went (OK, David Morse is in it for about 80 seconds but his exposition was so vague that it did not matter ). Everyone else was just fine but only one other character is given a chance to shine a little bit in the movie. The Israeli soldier Segan is just as tough as Pitt's character and doesn't have any back story, but she manages to broaden our interest in the rest of humanity by her willingness to fight on despite a dramatic turn of events. You can see that this is a big movie, there are cities being torn apart and naval ships put at the disposal of some of the survivors. Plane crashes and nuclear explosions seem to occur every few minutes and the production design was usually convincing. It's a crackerjack entertainment that has some big gaps in it's plotting but it overcomes those weaknesses with some effective tension and suspense sequences. I still think I will be heading over to my son in-law Drew's house when the Zombie Apocalypse shows up. He is better armed than Brad Pitt is and I think our chances would be stronger in the long run. Besides if Brad shows up, we'll know where all the zombies are, right behind him.
Posted by Richard Kirkham at 8:58 PM

Moderate expectations are satisfied. It entertains for the time that it runs.Thanks for commenting Nick.