If you are looking for big and stupid with a lot of explosions, you could do worse than "White House Down", like maybe "Godzilla" or "2012". Which would be completely appropriate given the heritage of this film. Roland Emmerich has made some spectacular popcorn movies over the years but he has also made some that did not quite live up to the craptasitic story telling that we know he can accomplish. This movie falls squarely in between. It would like to soar near "Independence Day" but it is closer to "The Day After Tomorrow". Preposterous and derivative it can't quite reach the heights of fun silliness that it shoots for, but it has some passing moments and while a bit overstuffed, it still leaves us wanting something just a little bit more.

In 1998, "Armageddon" did not suffer in the wake of it's earlier in the year, end of the world comet crashing into the Earth cousin "Deep Impact". "White House Down" unfortunately does not compare as favorably with it's previously released story incarnation, "Olympus has Fallen." Part of the reason might be that the enemy is so much more believable in that film, and while there are plot twists, it does not require the highest echelons of government to achieve the destruction of the President's house. There was also a more realistic portrayal of the President in that movie than we get here. Jamie Fox is a fine actor, I watched "Django Unchained" just last night and he can carry a film. In "Ray" he had a personality to convey. As the President in "White House Down", he is a caricature of a leader. We are supposed to buy that he has a fixation on achieving greatness by accepting the word of the Iranian President on military matters in the Middle East. He believes the turmoil in the world is all caused by poverty, and he has unilateral authority to act on the basis of his beliefs regardless of treaties or Congressional oversight. The only personality traits he shows are the Jordans that he dons in the last half of the movie and his insistence in the face of the opposite advice from everyone involved to fly Marine One down low over the Lincoln Memorial. He does get a couple of good one liners in the story, and they undermine his credibility but do add some jocularity to the proceedings.

Channing Tatum gets to play the hero in this story. He gets a little more character development because his precocious daughter is part of the group of hostages that is taken during the attack. She becomes a bigger hero than him because she has a You Tube Channel. Yep, Hollywood is going to glory in the fight against terrorism through the surrogacy of real life media uploads. The big advantage of her video is that it allows the military fighters in the terror group to be identified. Which is then used for no purpose whatsoever except to suggest they are bad guys. They are bad guys who have an ax to grind with the U.S. government. There is an abandoned CIA agent, a racist right wing nut job, and mercenaries of various types. They are brought into the same action for completely different reasons and they form a cohesive unit until they don't. The main character behind the plot has his own agenda, which some of the group knows and some does not. In the long run we are expected to believe that government officials with long careers and a history of honorable service, will become merciless killers of innocents and colleagues alike. Maggie Gyllenhaal's Secret Service functionary is even more naive than the President and her comments often stir unintended laughter.

The five minute car chase on the South Lawn of the White House is one of the more inane sections of the movie. Some explosions kill dozens of people and others merely scatter a few before they take up arms again. The President and The Hero keep running back and forth without much of a plan. The scenario behind the plot is convoluted, and it has inherent flaws in story telling. Nuclear codes are changed, but the identification system for Presidential Authorization stays the same, despite multiple changes in Presidential status. 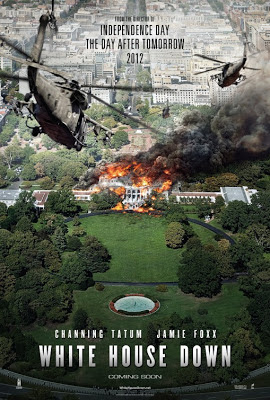 I'm willing to go along with all of the malarkey if the entertainment value is high enough. It just does not reach that point here. Nothing in the characters ever reaches the joyful audacity of Nic Cage in "The Rock". There are some flares of temper and frustration, but Tatum can't carry the maniacal glee of Cages scenery chewing and none of the terrorists has any fun lines at all. I did enjoy the tour guide and the line about "Independence Day" did get me to laugh at loud. The manipulation is not just obvious, that can be forgiven, it was just artless and that hurts the entertainment quality of the movie.
Posted by Richard Kirkham at 9:19 PM

I should be checking this out fairly soon. Thanks for the heads up, Richard.

It's fun but not necessary. We got a better version a few months ago. Make sure to share your thoughts after you see it. Thanks.