When I saw the first trailer for this movie, I was a little concerned. It looked like Vince Vaughn and Owen Wilson were trying to survive on the vapors of past success. Time marches on for all of us and the idea of these two making a raunchy comedy seemed a little distasteful. As it turns out there is almost nothing raunchy about this. It enhances the story that these two are a little long in the tooth and it plays like a more straightforward comedy from the 1990s, with a newer subject but the same mixture of humor and heart that was so typical of that era. This is much closer to "Dodgeball: A True Underdog Story" than to "Wedding Crashers". As a result it is a fairly easy film to recommend to a wide audience. Last summer I could smell the stink on "The Watch", and I avoided it, this year, I was suspicious but I am really glad I did not turn my nose up at it.

The setup is something anybody of a generation from before 1990 will be able to relate to. The world has changed, and while you might have a good skill set, it may not be the one that anyone is looking for anymore.   Nick and Bill are sales guys who have a great personal touch but are antiques in the modern age of communication. It seems strange to think that guys like this are old school, but since that was the name of one of the early hits for Vaughn, maybe it is correct. This is basically a fish out of water story, and as such it comes down to how willing you are to believe that the fish can master a new environment. There are a couple of cheats just for laughs. I think guys in their forties are going to know who the X-Men are and would not fall for the joke that is teased in the trailer. One of them even makes a more current pop culture referent to "The Hunger Games". So they are not totally out of touch.  Someone savvy enough to do a Google Hangout for a job interview is likely to know of "Instagram". Other than a couple of short cuts like that the film manages to be pretty realistic in setting up the characters at the internship they manage to get with Google. Programming and engineering are not their strong suit and so the movie plays best when showing them struggling with the technical side of the job.

Everyone on their intern team becomes a dutch uncle, pointing out their weaknesses. There is a snotty rival team member who discourages one character so much that the obligatory plot complication in the last act seems pretty reasonable. Outsiders are vulnerable to self doubt, although the Vince Vaughn character of Bill, seems like the least likely of the two to give into it. Some good seeds were planted early on so it is not a complete contrivance. We get some nice background bits without having too much of the characters played by Rob Riggle and Will Farrell. Riggle gets enough screen time to be mildly disturbing but not so much that you wish the part was gone from the film. Farrell on the other hand, brings the movie to a complete stop in his brief time on screen. The scene is needed for us to believe that Wilson's character would go along with Vaughn, but Farrell does his usual scream acting. He seems to believe that louder is funnier. In fact it is just irritating. He has become a parody of himself instead of an interesting personality. Vaughn and Wilson are doing some of the same stuff they have done for years but they freshen it up, and actually try to make it work for the story. It is an interesting contrast in the development of their careers.

I'll tell you who this film will not work for: hipsters. It is too conventional and the characters are too grounded to satisfy the desire for the new and innovative. I on the other hand appreciate a story that is well crafted, even if it is derivative. The construction of a good meal starts with solid ingredients, and a good recipe. Sometimes people don't want the ravioli with chipolte tomato bisque and goat cheese. They want a simple ravioli with a good meat sauce. It may not be as inventive but it will go down well and it is usually a lot more satisfying. If you hate movies that you can see the story arc from a mile away on, than you should skip this. If you like a movie that tells a fun story and is well performed and very entertaining, than this is right up your alley. Wilson is his usual surfer burnout persona, but it was used very nicely here. Vaughn is the emotionally driven cheerleader type, but it was limited to reasonable doses along the way. The "Flashdance" inspiration story is not nearly as irritating in the film as it was in the trailer, so don't be scared away. The Google connection is the biggest product placement component I have seen since FedEx in "Cast Away". You can't get around it, and while it looks like it might be interesting, it also makes me a little squeamish. The work environment feels just a couple of steps away from "Stepford", where everything is perfect. 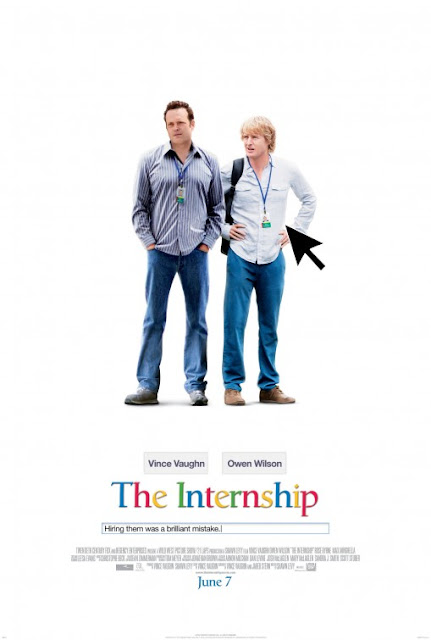 This film was so much better than I thought it was going to be. It is a conventional comedy, and that was the biggest surprise. The script and story are largely a result of Vince Vaughn's work, and he is not swinging for the fences. He is trying to keep the game going by getting a hit and he manages a solid double. I can't say that everyone will like it, it may be a little staid for younger audiences, expecting filthy language, outrageous behavior and cutting edge humor. If you are looking for a pleasant evening at the movies, with a date or a friend, than "The Internship" will be rewarding enough for you. You will be glad that you applied and the experience will be worthwhile.
Posted by Richard Kirkham at 3:03 PM

Yeah, solid double might be right. Maybe like more of a single, but I don't feel strongly enough to quibble. You make some valid points about some of the jokes that shouldn't really work, but during the movie I didn't really question them. It wasn't great by any means, but it was way better than I thought it would be. :D

Maybe I am generous because it was not the horror I expected. You won't hate yourself and you will laugh a little.