After the debacle that was "Cars 2" it would be understandable that Pixar fans would be concerned about an unnecessary sequel to a fantastic original film. While the sequel route worked with "Toy Story", it certainly did not feel like there was more follow up story for Monsters Inc. Fortunately, instead of inventing a new challenge for the characters in the original film, they have chosen to visit their roots and explore the characters from an historical perspective. This preserves the world in which we first met Sully and Mike but it allows us to see them from a different perspective. I think it was a wise choice. While "Monsters University" lacks some of the dynamic story telling and emotional heft of the first movie, the prequel wisely sticks to character development and humor. The plot is less important than the jokes and the personalities of our two friends and assorted other characters.

Billy Crystal puts so much into the character of Mike Wazowski, that he feels new and fresh despite the fact that we already have one movie story behind us (or is it in front of us?). Mike seems to be the smart kid with big ambitions who just seems to not quite fit in. We get to see where his dream comes from and how he doggedly pursues it. Along the way, some old rivalries and new friendships are started. College is the place where people go to reinvent themselves and Mike has every intention of doing just that. He longs to be a "Scarer" at Monsters Inc., and excels at his academics at the same time that he continues to struggle with his place in the school. John Goodman is back and he plays it more like a second fiddle this time. It is Mike's story, and although he has important story moments, the plot ultimately depends on Mike. This is where the characters meet and it is great to see how they manage to become friends in spite of some of the things thast seperate them in the beginning.

While it is not quite "Animal House" the story does center on the antics of a group of outsiders trying to fight the powers that be. The humor is closer to "revenge of the Nerds" with little touches of the Disney/Pixar magic thrown in. The tables set up in the quad that solicit the freshman to join a club or activity are very funny. There is a reference to some of the usual college traditions, like football chants and good luck touching of school icons. Anyone who has gone to a college that has a real campus life will recognize the stereotypes and the obligatory processes that student struggle with. Most of them are handled hilariously here. Early efforts in the classroom fall away to the usual Fraternity hijinks that make a movie like this work. Imagine trying to establish a coll persona and having your Mom pop up to take your picture.

Once again the animation is top notch but there was nothing spectacular in the vision of the movie that draws attention to itself. The challenges that the competing fraternities and sororities have to go thru are all similar to something that might be done in the non-monster world. The main differences were not the ideas but the fact that the participants were monsters. There are some funny bits based on the idea that the monsters will have an allergic reaction to some of the obstacles or that there is a massive monster librarian. To me the thing that was most effective about the animation was how much emotion they could get onto the face of a one eyed creature. Mike is very expressive despite having half the tools and none of the unique characteristics of the other creatures. There are plenty of nods to the original film along the way and everything seems to fit together pretty well. 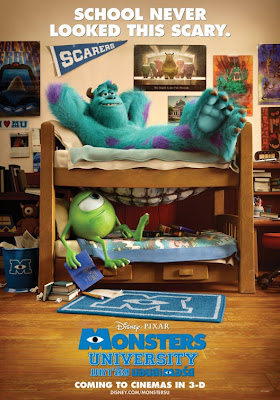 I was a little surprised at how the major conflict at the end was resolved. There is a consequence to trying to take a shortcut and Mike and Sully both learn that, but they learn it cheerfully. The end credits contain a series of visuals that bridge the story and turn what might have been a disappointment into a triumph. Also, there is a stinger joke and if you leave before the credits are done you are going to miss a pretty good laugh. Monsters University is not an instant classic like "Ratatouille" or "Up" or and of the "Toy Story" movies, but it is an immensely charming entertainment that has clever humor and is integrated well with characters that we already know. 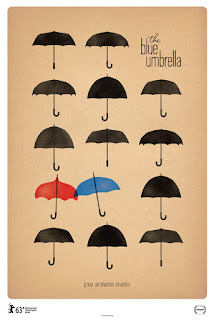 As always, a Pixar feature is accompanied by a short that has plenty of whimsy and charm. It is not laugh out loud funny as some of the older Pixar shorts are. This one tells a sweet little story about two umbrellas that catch each others eye and the struggle they go through to meet. It is five minutes of mild pleasure that looks like it mixes computer animation with actual footage of the real world (although I simply think that is the excellence of the Pixar design fooling us).
Posted by Richard Kirkham at 7:43 PM

My kids and I really enjoyed this. Another fine review, Richard.

Busy day, three films. This was my favorite of the day. Glad the kids liked it.