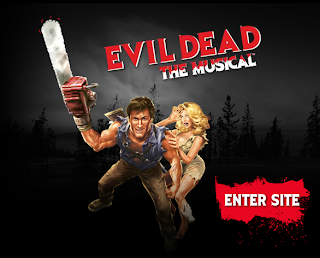 I've been out of town and out of theaters for a little while. While we were traveling, we stopped in Vegas and made it to a presentation of "Evil Dead: The Musical". I'd heard of it but I did not know that it was still in production. It turns out that after its Off-Broadway run, it has cropped up in a number of places and it has found a pretty solid home in the V theater in the Planet Hollywood Hotel. A friend had gone to see it a few weeks ago and I could hardly wait to join the initiated. 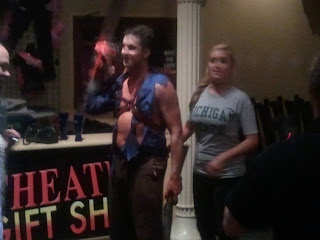 The production values are even lower than the original film the musical is based on. This play is done on the cheap. It works pretty well because the story is trashy, the jokes are vulgar and the concept is silly. It is one step up from an elaborate Reader's Theater presentation. The recorded music and the sets are a tip off that your money is going to pay the cast not to build an empire. That's a good thing because the cast is the main reason that the play works. Everyone is enthusiastic and having a good time. The leads have pretty solid voices and if they were not sometimes betrayed by the audio system, you might be able to say they have good chops. Whatever draw backs there were in the singing, are compensated for by the over the top physical comedy the actors put into their parts. They ham it up and dance with vigor and mug for individual audience members. It feels like a lounge act but with a plot.


The songs are all very funny and play off the horror film aspects of the story pretty well. "Cabin in the Woods" is a cheerful upbeat piece that sets the characters and establishes the cheesiness of the production. It is followed by "Stupid Bitch", "What the F*** was That?" and "All the Men in My Life Keep Getting Killed by Candarian Demons". You can pretty much get the idea by looking at those titles. The show is not scary, or serious or much more than a series of jokes about all the "Evil Dead" movies. The highlight for me was the dance number "Do the Necronomicon". It clearly invites a comparison of this play to "Rocky Horror". That is a pretty good comparison to make, the movie is self referential silliness that plays well at mid-night. At the end, you'll be standing in the aisles doing the dance your self, although it is a little more complicated than the "Time Warp". 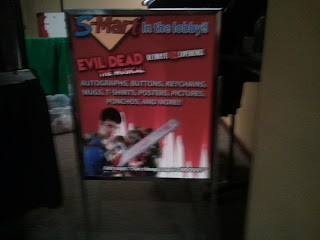 If I had known ahead of time what the perks were of being in the "Spatter Zone" seats, I might have thought of upgrading.  Let me just say if you spring for the upgrade, be sure to wear disposable clothes that you won't miss. At intermission, the character of Dead Scott, (I'm not sure if the pun is intended, I want to believe so) makes sure that if you did not get your monies worth of liquid crimson, that you will not go home disappointed. 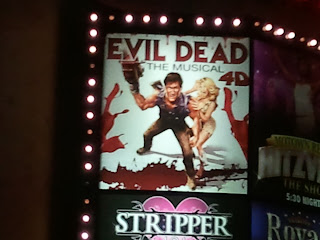 There are bits and pieces from all the films in the musical. Most of the great lines get recycled in an obvious manner by the characters. There is nothing subtle about it, and it isn't even very clever but it is satisfying for all of us deadites. While there is no nudity, it is not really for kids. The language is frequently excessively vulgar. The MC is especially free with the F-bomb and there is a running theater joke based on the play's official photographer that results in audience call outs which encourage the whole assembly to participate. If you love these movies you will have a great time. It does suffer a little loss of steam in the second act but there are a couple of highlights that make the lull less painful. Over all I would rate the whole thing "Groovy".
Posted by Richard Kirkham at 5:27 PM