Furious 6 or Fast and Furious Six, or

I saw the original Fast and Furious in 2001. That was twelve years and five whole movies ago. It was a guilty Summer pleasure that did not stick with me for more than a minute or two. I do remember that it was the last time I went to Universal Studios, right after the 9/11 attacks, because the cars from the movie were on display. Nothing fancy, they were just sitting there. OK, that was kinda cool for two minutes and then I moved on. It appears a lot has happened in the last ten years, the movies are now heist films, the good guy from the first movie is now a member of the criminal gang, and Dwayne Johnson has had some dealings with them in the past as some kind of U.S. Federal agent. That last part works out well for me because I like the former "Rock". He is an action star with some charisma.

It does not work out as well for Vin Diesel. I have no problems with him except that he is incredibly unexpressive in this whole movie. His tone of voice never varies, I don't remember any facial expression that could be described as more than a slight smirk, and he has a whole bunch of ponderous lines he has to read. Johnson by comparison is full of attitude, the voice changes from scene to scene,  and he only does two or three incredibly silly, gravity defying action moves. Don't get me wrong, the flying headbutt that Diesel performs is fun, but it is also over the top ridiculous. This is Johnsons third big film of the Spring and he has not outworn his welcome yet. Diesel on the other hand needs a cup of Joe and some Benzedrine. I saw the trailer for the Riddick movie coming out later this year, he looks sleepy in that also.

"Furious 6" features a returning cast member who was apparently presumed dead. She now has to be recovered and a strategic genius rogue British Special Forces guy has to be defeated. We open the film with a car race. There is a car race in the middle of the film pitting Diesel against his old amnesiac girlfriend. The film ends with a car race in Tokyo. In between the car races are car chases. The primary difference between the two types of car activities seems to be that the crashes are deliberate in the chases.  If you are not into car chase shots and racing motifs, you should skip this movie (and hell why would you even have thought of seeing it in the first place?). Although it is set up as something of a heist film, there is only one element that fits that bill and it is mostly buried in the big car chase that involves a tank. I like cars well enough, but I'm not by any stretch of the imagination a gearhead. They don't really talk much about the cars or show why one might be better than another, and it seems that they will have an endless supply to crash as the movie goes on.

There are a half dozen or more "good guy" characters to keep track of, and an equal number of villains. I suppose we have met some of Diesel's crew in the earlier films, I'll just accept them as they are and treat them like the established characters in any continuing series. I did not feel any particular affection for any of them, and there was only one scene where Johnson and one of the crew take a little revenge on a snooty car broker, that had much comedic value. This movie could use a stronger plot for the villain, and better dialogue for the secondary characters. It could also be tightened up by about twenty minutes. Some of the chases go on way to long. Instead of a breezy 90 minutes it is a ponderous two hours plus. Nonsense works best when it is brief and to the point. This movie is of course complete nonsense. That does not mean it isn't fun. I had a pretty good time, even though I was frequently lost in all the car chases trying to figure out which set of cars was chasing what other set of cars. No one seems capable of dying in a car crash, and they all appear to be the worst marksmen in the world. That's OK because then they can race again a little while later. 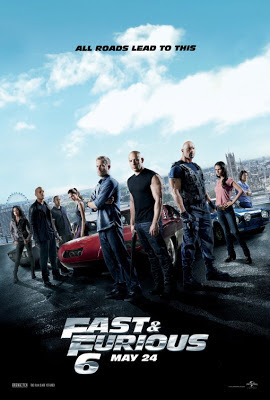 I did like the character of Gina Carano, as Johnsons sidekick. She is a tough looking but attractive woman who looks great fighting.  I saw her in "Haywire" last year and she should definitely be doing these action kinds of films. Her character is wasted in a plot line that was not necessary and is a contrived cliché. It does appear however that in the next movie, we will get a different kind of kick ass character. I don't know if there is some story line I missed in the previous movies, but it looks like "Handsome Rob" is going to be an antagonist in the next film and that short burst of charisma he injects in the film at the end makes the villain in this movie look tepid.

Posted by Richard Kirkham at 5:58 PM

Fine look at this one, Richard. There’s a reason you have ludicrous and Ludacris literally in the film! Entertaining, though (along with the longest landing strip in the history of NATO, Spain, or the planet being the centerpiece location for a finale! Still, made the time pass quickly.

It doesn't make sense but it did make my afternoon fun for a couple hours.

Every criticism you level at Diesel is one of the reasons I love him here.

I agree that nonsense works best when it's short, but I wouldn't take any of the awesomeness away from this movie! LOL

That just shows how little I remembered of them. What were they stealing back in 2001? I have no idea, Cars? This of course is a reverse Heist film, we have to figure out the bad guys and then come up with a plan to stop them. Fortunately my plan includes the longest runway in the universe.