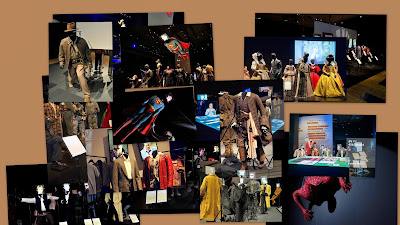 So this afternoon, I spent a delightful couple of hours down at the future home of the Academy Museum of Motion Pictures, looking at the history and mystery of costume design. There are literally hundreds of costumes from the last hundred years of motion pictures. Imagine seeing the outfit that Charlie Chaplin created for his first Hal Roach films. Hanging from the ceiling in a horizontal position is Christopher Reeves version of the Superman costume. Dorothy's gingham dress and the Ruby slippers also make an appearance.

The exhibit makes use of extensive multimedia tools and the latest forms of computer digitized images. At several stops there is a tabletop display that features designs, scenes, and backstage information about the costumes and the pictures they are featured in. Sitting on either side of the table were high backed chairs that contained video screens featuring the director and the costume designer, as if they were have a conversation across the table with each other and with us. Quentin Tarantino and Sharen Davis discuss the Django Unchained costumes, Martin Scorsese and Sandy Powell marvel at how Daniel Day Lewis makes Bill the Butcher look both stylish and deadly when he dons her designs.

Several displays featured historical progress of costuming and discussed the nature of special effects, censorship and history on the clothes that the stars wear in the movies.  There was a selection of costumes that showed how the Queen of England has been depicted in films, from Bette Davis to Helen Mirren and a dozen other Queens as well. There was a look back at Westerns, and War Pictures as well as more contemporary films like the "Oceans Eleven" film series. Errol Flynn is crossing swords with Johnny Depp and Elizabeth Taylor and Claudette Colbert are vying for most glamorous version of "Cleopatra".

The use of teleprompters and holographic style images of the stars seemed to put the actors in the designs right in front of you at times. You enter though a short passage lined with the eight Oscars that Edith Head won, dramatically lighted with some background on the most famous costumer of all time. The exhibit hall is very dark so that the light on the costumes brings out all of the details and colors dramatically. It was a little tough for my vertigo inflicted spouse but she made it through without stumbling (the same could not be said for me).

My two favorite displays were the Indiana Jones deconstruction of the classic adventurer's wardrobe, and the dozen or so costumes worn by Meryl Streep,each of which was accompanied by a video screen with the marvelous actor discussing how the images came together with the characters. Each piece of Indy's ensemble was dissected for it's use in building the character as a functioning field archeologist and devil man care swashbuckler.

Young film goers will be thrilled to see costumes from a dozen Superhero films, including X-Men, The Dark Knight, Iron Man and Captain America. Spider man was on the wall and I almost missed him. There was also an interesting review of motion capture work and James Cameron discussed how real costumes have to be created before you can digitally animate them such as was done in Avatar. Admissions cost is twenty bucks and parking is likely to run about twelve dollars. A real movie fan will feel that it was money well spent. How often do you get to walk the red carpet with the stars of Hollywood history, and get to find out who they are wearing without having to shout at them? 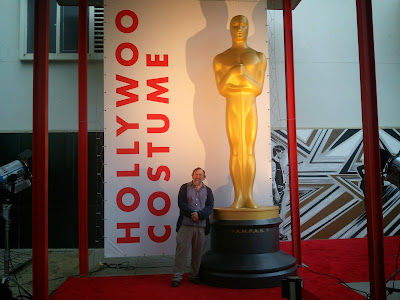 Posted by Richard Kirkham at 8:48 PM

So many things to see and so little ability to remember every detail. Thanks for the add.