Frankly, I'd be willing to give up an Academy Award nomination to Bill Murray for the performance he gives before the opening credits are even finished. He has the look of this character nailed, there is a distinct accent that he uses without any hesitation, and the dance he does with himself to the jukebox music was worth the price of admission. I was sold on this movie almost instantly based on the character and the actor. It's pretty nice that there are so many other things going for it as well.

Vincent is an apparently unpleasant man, eeking out an existence on a reverse mortgage and occasional betting on the ponies.  He is in desperate financial shape but never seems to let it bother him too much. When the new neighbor ends up needing some after school supervision for her son, Vincent falls into the job. Yes this is a buddy picture and it is about the redemption of a character that seems irredeemable, but it is not exactly that.  The character never becomes less cantankerous than he starts out as. He still has all the flaws at the end of the movie that he does at the beginning. The story is unique because instead of changing the character, we are forced to change our perspective. We learn about the character through his connection with the nine year old boy he is taking care of. It may be a highly sentimentalized view but that is ultimately what this movie is, a sentimental view of someone hard to be sentimental about.

Vincent's attitude towards the rest of the world is not hard to understand. People let him down, they don't respond to him in any way that he can fathom and since he is semi-inebriated during most of the story, he can't really help himself. Oliver, the kid in the story, sees Vincent for what he is because he has no expectations and prejudices yet. The character is a smart kid but not much like those kids you see on a sitcom. He appreciates any effort that Vincent makes to help him, because he can't really believe anyone else will. Gambling, fighting and lying are not the lessons that most of us would want our kids to learn, but politeness and attentiveness are. Oliver learns from both positive and negative experiences with Vincent.

Since her sudden rise to success just a couple of years ago, Melissa McCarthy has become a punching bag for misogynists in the comedy world. There is a lot of hate that gets written about her and some of it may stem from the fact that the characters she has played were repetitive stereotypes. She tones it down here and plays a real human being in pain who is having a difficult time adjusting to new living circumstances. She never tries to upstage Murray, instead she delivers the comic lines in a normal manner that makes the movie seem more real than it could ever be. Naomi Watts does a lived in, hard life, unsympathetic, Russian immigrant persona as if she were made for it. My guess is that the make up work here is so subtle that it will not be noticed and instead people with think she got smacked down by her career. 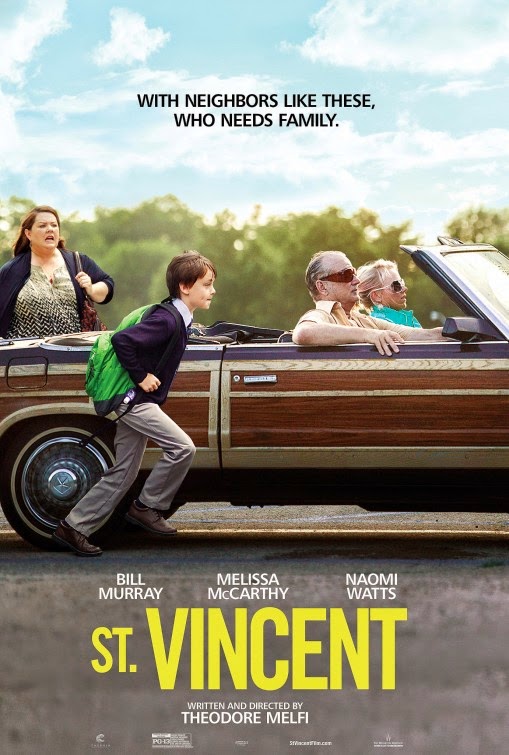 The climax of the movie is another one of those presentations in front of an audience that seem to be typical in underdog stories. Like "About a Boy" from more than a decade ago, a public performance rescues a nasty character from himself. Bill Murray is no Hugh Grant. He is not lovable or cute. He is however one of the funniest men on the planet and a damn good actor. St. Vincent gives him a showcase for both talents. In my mind, he has met the requirement for performing miracles that would allow him the title status of this movie.
Posted by Richard Kirkham at 7:41 PM