Disney Studios has moved from being stogy to contemporary in a few short years. Once upon a time they were fairy tale tellers with an occasional foray into cute. Now they seem to alternate with regularity between the classic Princess stories that they have told well for seventy years and the very modern stuff like "Wreck it Ralph" and "Frankenweeine". Last year was "Frozen" so we are due up for something non-traditional, the answer is "Big Hero 6".

Happy to say it is a winner although my admiration for it is tempered a little bit by some of the prejudices I have from many years of watching manga and anime from a distance. The story takes place in a future city San Fransokyo, which looks like San Francisco at first, and is even introduced with the standard ocean flyover shot of Fisherman's Wharf. Just like a "Dirty Harry" movie. As the town focuses however, it is a Hodgepodge of traditional S.F. sights and Asian influenced modifications. It's not clear if the whole town was bought by some corporation from Japan, or the universe is simply altered because of some population trend. That's always been one of my issues with this stuff, it is just enough like the real world to pull you in and then something out of left field shows up and changes things without any explanation. As a kid I liked "Astro Boy" and "Gigantor" but I knew they were off. "Speed Racer" worked for me as a film because nothing in it pretended to be real, it was all overdone. This movie does the same kind of thing. Our hero, who is named Hiro, is a genius kid who turns his nose up at using his smarts at anything as mundane as University Research. He then finds he loves the idea when his brother takes him on a tour, and tries to gain admission with a special project that will wow the engineering crowd. It does, and he immediately supersedes anything that everyone else is doing and we have no reason for him to get wrapped up in the University except the plot demands it. Just more of the stuff that makes no sense but that everyone in these media take for granted and just go with. I try to do that but sometimes it just nags at me and takes me out of the story.

There is a marvelous relationship built between the automated health care provider and the young boy Hiro. Even though Baymax never really develops any emotion, Hiro seems to provide enough for both of them. The fact that Baymax was programmed and slaved over by Hiro's older brother Tadashi, makes it poignant even though it is really mechanical. The idea of the health care robot is a bit absurd but it allows the character to sound as if he is emotionally invested despite it mostly being programming.  I guess if Will Robinson can grow such an attachment, and the crew of the U.S.S. Enterprise can relate to "Data", we should be forgiving that the screen writers want us to do the same thing. There are still a lot of other elements that come together randomly which make the movie fun but also quite nonsensical. I enjoyed the conversion of Tadashi and Hiro's friends into a superhero team, but it happens so quickly and also with more brilliance than any University could have provided, that it still seems odd. It wasn't until two thirds of the way though and I accidentally noticed how many of them there were, that I suddenly got the title of the movie.

I will say that I could see the villain coming pretty early in the process, but it was not clear what the motivation was until a coincidence reveals it. That's another one of those things that threw me off, the accidental nature of all of this coming together. This is a movie that should be like "The Incredibles", with a background in technology and superhero worship, but it is missing the back story that made that movie work so well and the solutions come so fast that it rarely felt like the team was struggling. T.J. Miller completes a 2014 trifecta of clueless characters with a role as a slacker kid with a wish to be part of the nerd school and Alan Tudyk voices another Disney film after his turn in "Wreck it Ralph", this time playing a self centered Steve Jobs type character. Scott Adsit does a nice even voiced job as Baymax. I recognized James Cromwell's voice long before I remembered him and that scares me a little since I used to be a wiz at that kind of stuff. 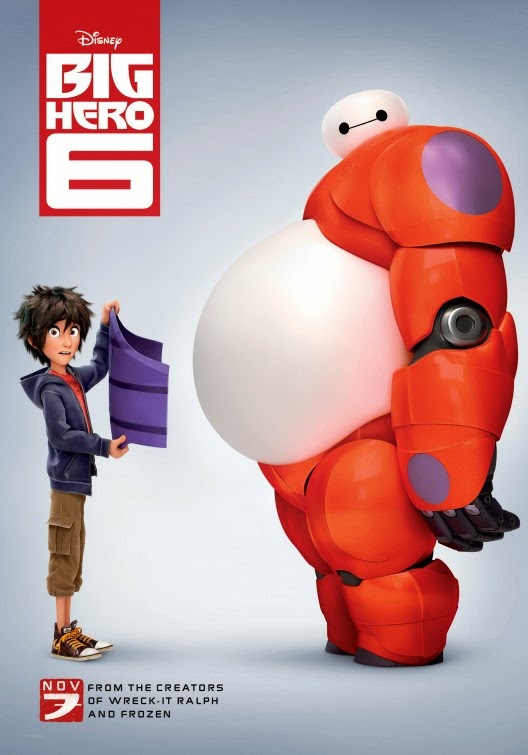 This movie was very entertaining and I thought it looked great. There are concepts in the story that worked and a few that don't. This is not going to be a classic that everyone will remember as their favorite film from youth, but it will make a lot of film goers happy and what more do you want from a cartoon imitating a manga style comic?

Posted by Richard Kirkham at 7:32 PM

Yep, I have to agree. It's likable but very much a standard story.

Very likeable, and no doubt helped by having John Lasseter as Executive Producer. Not among the greats by either Disney or Pixar, but a solid, entertaining animated movie.

p.s., I could have done without the cameo at the end, though (soooo Marvel).

You stuck it out through the credits? Good for you, even though it was unnecessary. I watch credits because the people who worked on a film deserve the acknowledgement and I like to stew on a movie before I get up and rush out. When stingers started showing up I enjoyed that I was often the only person to see them. Now they are ubiquitous, and most people still don't see them but the fanboy crowd usually sticks it out. We were the only ones left in the theater when we got the little bit extra.

I still need to see this. I feel terrible. My kids have been asking but we have had sooo much going on. I have to remedy this.

The kids will love it. It will be in theaters till mid December, you should be good. Have fun.