Well it was a sad Saturday this weekend. In addition to the mediocre effort put in by my team against their arch rivals, Katniss and Company played at only a slightly higher level. "Mockingjay Part 1 will not leave a stink in the room the way our coach did on the field, but it will be a good argument to stop splitting up books and turning a series of three into a series of four or more. [Oh, and the same might be said for turning one book into three movies, but we will have to see how that comes out next month.]

Abandoning most of the science fiction elements found in the original story and films, the new "Hunger Games" movie becomes a political science paper aimed at discussing the roots of revolution. The idea of Katniss as the face of a revolt, fomented by the previously unknown forces from District 13, is straight propaganda analysis. The committee evaluation of the video prop piece she completes encapsulates this whole movie.   Why is she an inspiration and why is she not working as one in our film? Jennifer Lawrence has been very good in the previous "Hunger Games" movies, but she is less natural and interesting in this movie than she has been in anything I have seen her in. Most of this is because she has become a pawn, like she was in the original stories, but this time the action is controlled by a group of mundane cave dwellers who's motives seem to be a bit murky. She is not called on to use her wits or overcome an obstacle, she is a piece of agitprop set decoration for a larger conflict.

Much of the weakness in the film is directly from the weaknesses of the novel on which it is based. "Mockingjay was a limp ending to a young adult trilogy that simply ran out of steam and ended as quickly as it could. The Tributes from the first two stories are put on the sidelines while the revolution plays out between rebelling colonies and the Capital. There were some hints of the problems the rebels had wielding power in the novel. The prep team is abused and the citizens are required to live a regimented lifestyle that would deny them even the most mundane pleasures. The Castro like character of President Coin is hardly suggested in this film. All of the interesting elements of a not very interesting book are taken out when transferring it to the screen. The action in the film is limited to three or four moments when CGI battles are carried out with Katniss as the star of a recruitment commercial.

The strengths of the movie are in some unusual places. Elizabeth Banks as the frivolous Effie Trinket, gets to make a few comic moments zing without having to rely on over the top costuming and make up. Woody Harrelson's  Haymitch character is missing for most of the movie, but every time he shows up, the movie got better. The best piece of casting and the most accurately realized character is Donald Sutherland as President Snow. It is perhaps unfortunate for the movie that the highlight of the film is a skype session between Snow and Katniss at the end of the movie. Their interaction has more sparks in it than anything else that takes place in this two hour place holder.

With a nice dedication at the end of the movie to their co-worker who has passed, the film should be a fond reminder of Philip Seymour Hoffman and his talent. Watching his performance however foreshadows the plight he faced. He looks tired and flaccid in the part and there is no energy or personality in Plutarch Havensbee. His co-star from almost two decades ago in "Magnolia", Boogie Nights" and "The Big Lebowski" Julianne Moore, is a little better. As the calculating leader of District 13, she is impervious and distant in the way called for by the plot. Liam Hemsworth continues to be little more than a plot device to keep Katniss from accepting her devotion to Peeta. Gale gets some action scenes in the movie but he does little except move through the scenery. 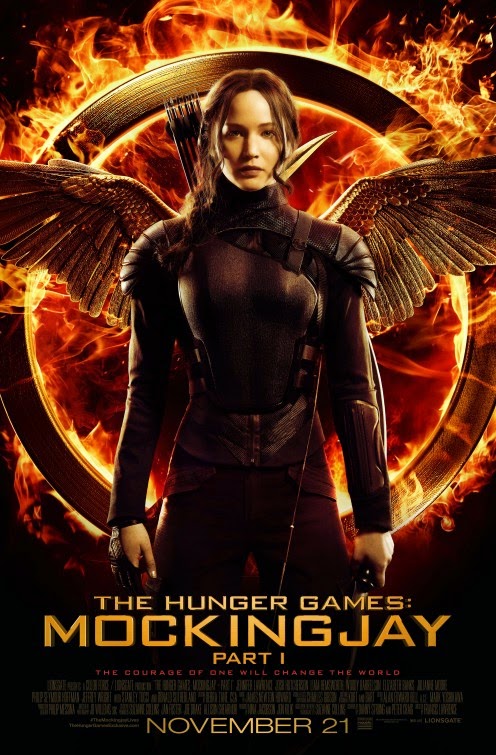 The movie looks good and the characters are given a chance to continue their story. The problem is that the story is losing steam as it becomes less about our heroic Tribute and more about the political intrigues of Panem. The hallucinatory gas attacks and the city destroying matrix that were parts of the book are no longer present. Faceless citizens revolt in the lumber and energy districts and a jingle is all we have to show their commitment. This movie will be a box office smash, but it will not be a treasured volume in the "Hunger Games" canon.

Posted by Richard Kirkham at 10:59 AM

I find the wide gaping ranges of opinions on this film to be fascinating. Yet another that I haven't went to see, but I hope to soon. I'll just keep my expectations in check.

Yeah, I'm a fan but this was a let down for me. I'll look for your views either at your site or if you don't do a post,come back here.