Some how I managed to go a decade without seeing this or any of the sequels (of which there are six, they came out annually for six straight years). I had no intention of seeing it today either but when we went to see John Wick yesterday, the AMC theater had mini-posters to give out and I'm afraid I'm an impulse buyer.  My kid likes horror films, there was an early show at a discount price, and I had to ask myself "why are you avoiding this?"

The answer is that I am not interested in the "torture porn" version of horror that this movie seems to have launched. I have no desire to watch human suffering for pleasure. When gore or dismemberment are done in pursuit of a story, then I can get behind it, but a slow scene with detailed moments of painful suffering brought to us by the SFX wizards of movies does not attract me. Imagine my surprise when I discovered that at least as far as the first movie is concerned, this is not horror based but rather a thriller with horror elements. It turns out this movie was far less graphic than a lot of other films I have in my past, and the disturbing scenarios are played out largely off screen.

So I"m ten years late to the party and telling most of you something you already know, "Saw" is an effective, low budget thriller that is full of plot holes but survives on the tricky premise it is based on. A serial killer who has the brains to engage in elaborate puzzles that lead to self inflicted death seems to be a stretch.  Most serial killers that are featured in film and television could qualify as geniuses and may be able to earn a doctorate at MIT. None of them seems close to the real life monsters that John Wayne Gacy, Angelo Bouno and Kenneth Bianci, or Richard Ramirez. The best character of a serial killer was Hannibal Lecter and he even he did not engage in the complicated "game-playing" that seems to be required of every new entry in the genre. Still. it is a movie only, and the idea of a two character drama played out in a locked room has all kinds of things going for it. There is still a lot of material outside of the room that has to be dealt with, but the main focus is on the two victims and their efforts to solve the puzzle of their imprisonment.

Co-screenwriter Leigh Whannell matches up well with veteran Cary Elwes as the two men, chained in a room and prompted to betray each other while at the same time trying to help each other. Elwes gets some pretty trite dialogue to spout, but he does it convincingly and in the last quarter of the movie, his desperation feels real. "Adam", Whannell's character, seems more genuine and the performance is much more solid from the get go. Danny Glover as the obsessed detective ends up chewing too much scenery in the final third of the film. Before his character goes off the rails, he seemed to be part of a legitimate police procedural. In a rush to wrap up the story, too many silly things have to happen.

To be honest, the most hard to watch scene for me was Adam's search for a clue in the toilet next to where he is chained up. A similar scene in "Trainspotting" is actually more vomit inducing. The kills are also not worse than any slasher film featuring Jason, Freddy, or Michael Myers.  All of "Jigsaw's" previous killings are only partially shown and the toilet scene was the one incident in the movie that the director seemed to linger over. The dramatic scene with the saw is much more implied than shown and the movie makes the right choice in avoiding becoming a gore fest, although the posters, trailers and other promotional material sell it that way. I don't know that this choice will be sustained in the other pictures in the series. 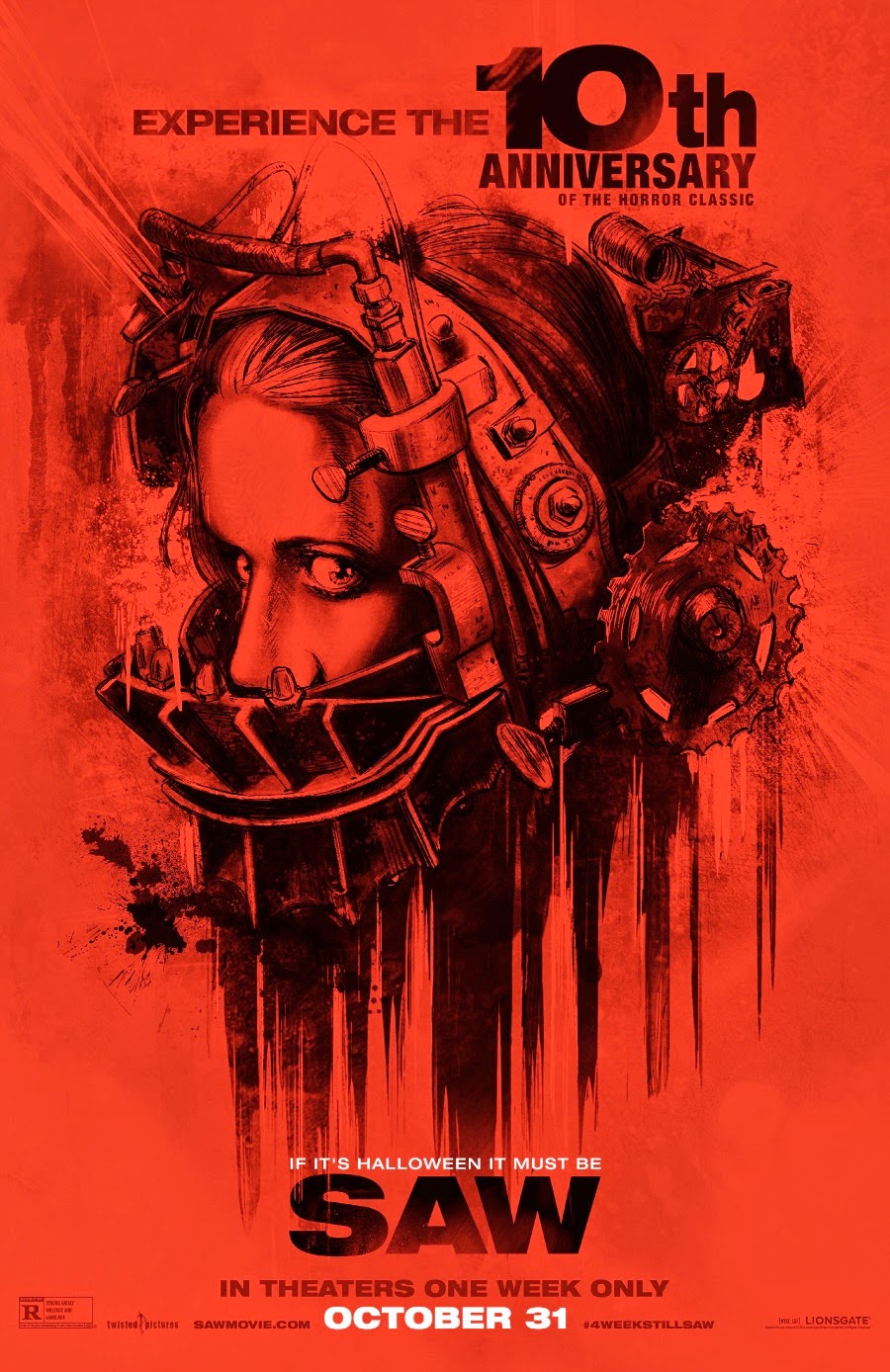 I'm not sure I will ever see any of the sequels. It seems unlikely that the simplicity of the concept will sustain itself for long before the need to satiate the morbid demand for audience shock begins to outweigh story considerations. I have to admire the execution of the plot and the direction of the film under modest financial circumstances. Some of the reviews from 10 years ago suggested that this was a vile film. Those comments were way over the top and in comparison to some of the things that have come after, Saw pales in the grotesque department. I appreciate special releases of older movies and the week that this was in theaters for Halloween was fine for me. Now next year, for the Fourth of July, could we please have the anagram version of this movie in theaters for a week to celebrate the fortieth anniversary of it's release. Seven days of Brody, Hooper and Quint chasing after a shark is at least as deserved as this this anniversary release was.

Posted by Richard Kirkham at 5:21 PM

I think the first SAW has held up the best for its premise and less so on it's torture-porn. That latter aspect got upped substantially in its sequels. You and I share similar criticism of this genre of horror. I'm not a gore-hound for the sake of watching human suffering. It's not worth my time or memory. As my father-in-law once told me, "There are things you can't 'unwatch'." Fine first-look, Richard.

Thanks Michael, I suspected that the sequels upped the torture quotient.I held off but it turned out to be very different from what I was expecting.